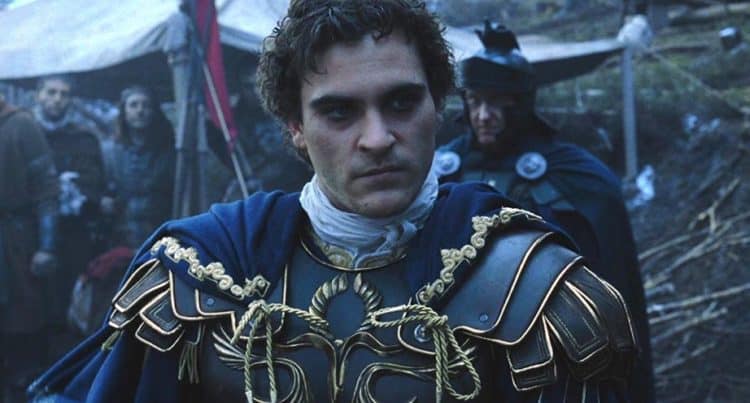 Joaquin Phoenix has often played characters that have something of a darker or even more tragic side to them, or both in fact. His characters are often someone you can find at least a small amount of pity for it not more, and whether he’s a protagonist or an antagonist it’s kind of tough to not like or admire him in some strange way. But when he goes bad he can become absolutely terrible, making you hate the character with a passion that’s usually reserved for only the worst of people. When he’s the good guy though he tend to keep him at arm’s length despite trusting his character, as though there’s something there that prevents a person from getting too close. In short he’s the kind of actor that you either love to hate or hate to love, but always manage to find at least some respect for.

Here are a few of the best movies of his career so far.

The movie wasn’t considered to be all that great, but the character that Joaquin played was perhaps one of the high points of the film. He portrays the brother of the main character, a former baseball player that had a chance to do something with his life but never really applied himself. Now he lives on the same property as his brother and niece and nephew and just does what it takes to get by everyday. However he’s the kind of character that tends to balance things out when he needs to and acts as a support when it’s absolutely necessary since he has only a few regrets, but none of which involve his family.

In every family there’s one black sheep that doesn’t follow the same moral code as the rest. In a family that’s notorious for serving the public and defending the laws that uphold society the black sheep tends to stick out like a sore thumb. Joaquin’s character is the kind of guy that parties all night, doesn’t care much for the law and its strict codes of conduct, and doesn’t always get along with his family. But when drug dealers start moving into the club and selling their goods with the knowledge and cooperation of his bosses, the club manager has to make a decision as to who he’s going to stand with, the dealers, or his family.

The one thing a mentally disturbed war veteran should not be doing is joining a cult, especially one that demands the kind of fealty that is basically “join up or get out”. When he does join the group he begins to talk as they do and even believe as they do, but he doesn’t act the same as they do. He’s violent towards others that question ‘the Cause’ and he tends to be the kind of man that they don’t want or need for their word to be spread. But as he begins to pull away it becomes evident that he needed something to believe in, not necessarily a group to join. Sometimes believing in something is more important than following those that share the same belief.

The story of Johnny Cash has been told a couple of times throughout the years and it seems safe to say that none of them have ever really gotten everything one hundred percent correct. That is kind of the point though, it’s not so much about getting everything perfectly accurate, it’s about entertaining the crowd and making sure that they at least get some background on the main character. Some of what happened in the movie did in fact happen in real life, and as far as picking Joaquin for the role they couldn’t have done a whole lot better since he had the sneer that Cash did down pretty well.

It’s interesting to note that the real Commodus started out being loved by the people and hated by the Senate. He did manage to lose his grip on reality over the years even after doing great things for his empire, but the movie makes him a bad guy right from the start, a pathetic replacement for his father and a jealous individual that seeks power and nothing else. But one thing you can say is that Joaquin did manage to create the character in a manner that makes people root for his death at the end, particularly since it came at the hands of the man he wronged so horribly. While not historically accurate it was still an entertaining and very passionate film that has inspired many people since its release.

After all, Gladiator coined one of the greatest phrases that has been heard from a movie in many years. “Are you not entertained?!” That is simply movie gold.