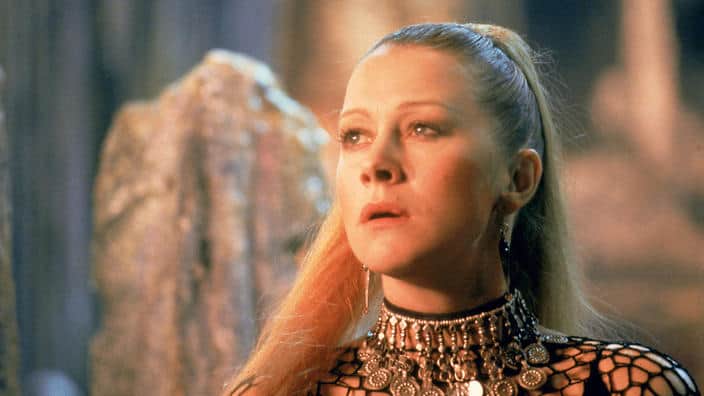 Helen Mirren simply exudes class in many respects but she can play a woman that’s down and dirty just as well as she plays someone that’s entirely dignified. In a lot of her roles however one thing that is evident is that she likes some modicum of control in her roles and displays that in one way or another. There’s nothing undignified in most of her characters as she plays them perfectly and has been known throughout the years as one of the most talented women in show business as well as one of those that looks ruthless but could possibly be one of the nicest people you’d ever meet. In many ways she’s probably not the easiest woman to get along with but it’s also evident that she’s going to tell things how they are and if you don’t like it, too bad. Sometimes people that keep it real are the most interesting though.

There have been many tales of the Roman emperor Caligula, and not all of them have been complimentary. He wasn’t the worst among the bunch but after a while of acclimating to his rule however he became extremely unbalanced and committed atrocities that his people could only stomach for so long. Eventually Caligula pushed the people too much, did too many things that couldn’t be forgiven, and as a result was assassinated as was customary in times of upheaval during such times. If you’re going to proclaim yourself a god however then people are bound to test that theory eventually.

This film wasn’t all that well-received by critics but the box office numbers kind of belied their words since it made around ten times as much as its budget. The whole premise is that Sarah Winchester has been adding on to the house she built with her inheritance in order to contain the spirits of those that were killed by Winchester rifles. During the movie a doctor is brought in to determine whether she is sane enough to retain control of the Winchester company that was started by her late ex-husband, but as the haunting and unexplained phenomena begin to manifest in ways that are impossible to miss the doctor can only conclude that she is very sane.

3. The Fate of the Furious

Helen has stated that she’s never had kids as she’s never had the kind of mothering instinct that other women seem to have. Obviously that’s kind of a personal matter, but you can easily see how it comes out in this character since she plays the mother of Deckard and Owen Shaw, the villains from the previous movies that now have to work with their former enemies in order to bring down the hacker that recruited them both. She’s quite the manipulative mother in this movie as she gets Deckard to do what she wants simply by pretending to cry, something he apparently can’t stand to see.

An interesting plot point in a film like this is that once something is about to come to light that could ruin or otherwise damage the reputation of an individual that sits in a position of authority, everyone that had anything to do with it is summarily targeted and taken out. When those that don’t want to be taken out start to fight back however it becomes a giant chess game to see who held onto the lessons of past the best and who remembers everything they were taught back in the day when they were being instructed on how to lie, kill, and then blend in with society when the job was done.

People have had a field day with this one since it paints the screenwriter Dalton Trumbo in a very positive light as it shows him standing up for his rights as a writer and not stepping down from a project unless he’s given no choice. There’s even an instance in which he faces down John Wayne, almost daring the other man to hit him. The truth however was that Trumbo was a rather difficult man and wasn’t quite as heroic as he seems in this movie. Whether his supposed nemesis, Hedda Hopper, was truly the kind of woman that Mirren displays her as is hard to tell, but one thing is very clear, history is not always given over to a smooth transition to film as too many biases tend to occur when it comes to telling the story.

Helen is a very classy woman that doesn’t so much light up the screen when she comes as she commands the attention of the crowd when she’s in the scene. Her elegance, sense of poise and control, and just the tone of her voice indicate that when it’s her turn to talk it’s wise to listen.