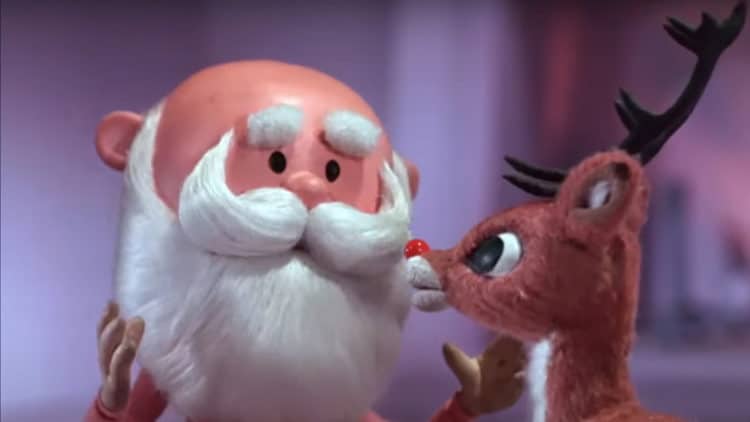 One wouldn’t think that prohibition would have much to do with Rudolph the Red-Nosed Reindeer, would they? Probably not since the famous reindeer and his tale of being bullied for so long only to finally gain Santa’s attention and become one of the most famous Christmas characters ever is something that many people remember as a negative being turned into a positive. Well, the creator of the stop-motion character that has been such a popular part of the holidays for so many years almost didn’t get the chance to make this happen since Rudolph’s red nose was used as an excuse by those that didn’t want people associating the red noses that came from excessive alcohol consumption, which in 1939 was a big issue since prohibition had been absent for around six years at that point. It’s still a bit of a thin and not entirely useful explanation, especially since kids wouldn’t normally make such a connection in any case since children are typically wowed by cartoons or animated characters and are more likely to ‘ooh’ and ‘aah’ over shows such as this while having fun with it. How many kids would really liken Rudolph to a drunken uncle or another inebriated character with a glowing red nose?

If anyone has been noticing over the years, Rudolph hasn’t exactly been one of the biggest fixtures lately as even in shows and movies that have displayed Christmas in such a big way, Rudolph has been kind of absent when the reindeer are being shown. There are still representations of the famous character, but in movies such as The Santa Clause and various others, Rudolph hasn’t really been a big deal. It’s even been discussed now and then that Rudolph might not be an acceptable story any longer thanks to the fact that it deals with bullying, but as anyone should be able to state this is pretty ridiculous since the whole idea was even if Rudolph was getting bullied, he was still finally accepted by Santa and by the rest of the reindeer when it was determined that he was far more useful than anyone had realized and was therefore worth paying attention to. The fact that any type of social sensitivity has been allowed to reach every last part of society is something that a lot of people can’t help but shake their heads at as they roll their eyes and wonder how it came to this. Unfortunately, it’s nothing new since people have been floating such ideas for a while when it comes to the holidays and just about anything that can be openly criticized.

The idea that Rudolph almost didn’t get made due to the excuse of his red nose alluding to heavy drinking sounds more than a little ludicrous, especially with everything that people see as an issue these days. Christmas has definitely changed a bit no matter what anyone wants to say since it’s become far more cynical and much less innocent than it used to be when a lot of us can remember as children the simple tales and song we would enjoy as we counted down the days until that glorious morning when the culmination of the holidays resulted in ripping paper and exclamations of joy that came after the long, interminable wait (face it, as kids we thought the month lasted forever) was finally made worth it. Along the way towards that highly-anticipated moment, we enjoyed tale upon tale of the Christmas season, and Rudolph has, for a long time now, been one of the many tales that numerous individuals have enjoyed since they’ve focused more upon the fact that he was finally accepted and will think less of the bullying in order to remember this as a happy story. There have been people that have done what they can to focus on the more negative aspects to ensure that no one forgets about them, but learning that the Rudolph we know and love almost wasn’t represented in one of the most important holidays for children is the kind of revelation that makes a person grateful that people do change their minds from time to time.

The Christmas season is one that kids and adults look forward to all year no matter if they’re constantly thinking about it or not, since the joy and the happiness that the holidays bring to so many is something that we tend to look forward to at the end of a long year. This year, in particular, is one that a lot of people are hoping will just end eventually, but the news that we should be grateful that at least one of our legends was allowed to be represented in a way that people enjoy is the kind of revelation that should remind people to be grateful in general since no matter what’s been lost, there’s always something left to be grateful for.