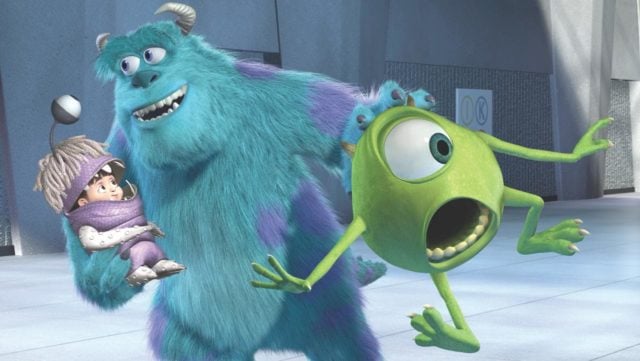 I’m not sure how many people saw this movie coming but honestly it kind of put a new spin on the monster in the closet or under the bed and things that go bump in the night. Plus it introduced a new duo that was pretty popular for a while and still remains so to this day. Sully and Mike aren’t at the top of the Disney lists at the moment as far as popularity goes, but they’re still very memorable and are a constant hit at conventions and in other ways. Who knew that monsters would ever be afraid of a human child? It just goes to show that fear of the unknown isn’t just a human thing.

I wonder if Boo ever grew up remembering “kitty”.

10. The actress that did Boo was so young that she wouldn’t sit still for her lines.

She had such a hard time sitting still that they simply followed her around with a microphone and recorded the things she said.

All the individual hairs on his body made the filming take forever since they wanted him to have realistic motion.

7. John Goodman pushed for Steve Buschemi to be included.

John Goodman and Steve Buschemi have acted together before so it’s not hard to see why he would push for this to happen.

6. The actors would perform their lines in the same room.

5. Boo was originally supposed to be younger.

She was supposed to be six years old to start with but it was decided that making her younger would make her more dependent on Sully and create a much better story.

If you look you can see her name on a picture hanging up on the wall in her room. Either Sully can’t read or he just decided that Boo sounded better.

The voice was supposed to be a temporary placeholder until something else was found but it was so great that they ended up keeping it.

2. There were some conceptual changes to Mike and Sully that weren’t made.

Mike was going to have no arms, just legs, while Sully was going to have tentacles instead of legs. It was thankfully decided that their current forms were best since the audience would have been focusing on the wrong aspects of each character if those changes had been made.

1. This was James Coburn’s last film.Â

The legendary film star played a very important role in the film as the villain. He passed on only a year after the film was released.

There are a lot more trivia facts about this film, such as the one that caught my eye but didn’t make it on the list. Mike says that Sully has been jealous of his good looks since the 4th grade. But in the next movie it’s obvious they’ve never met. Whoops.

10 Actors Who Should’ve Won An Academy Award By Now

Whatever Happened To The Cast Of “Girlfriends”?