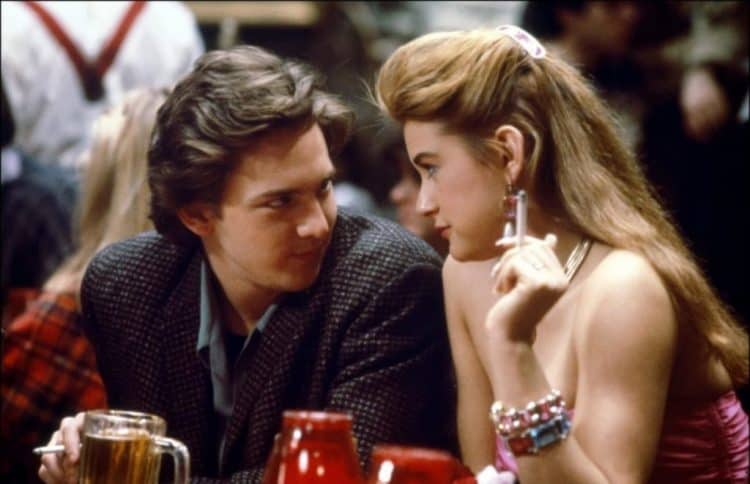 Demi Moore had something of an interesting upbringing since her biological father left her mother two months after they were married and she grew up knowing only the man that was her stepfather as a real father. Even that wasn’t perfect as by the time she was 16 she left home and went into modeling. At 17 she was discovered and started her acting career, though she didn’t get along too well with her parents at this point and lost almost all contact with them. She did reconcile with her mother before she passed away so there was some closure in her life. Throughout her career she’s played a few very strong roles as she has been portrayed as a very independent and forward woman that isn’t about to take a lot of garbage from anyone. This could be something that was reflected in her real life.

If Claire and Brian were here it would be a perfect reunion-type movie for the Breakfast Club, but all in all this movie is about a group of friends that upon graduating college and experiencing life come to find that it’s not all a bag of peaches as some people want to think. Relationships, affairs, and the general attitudes experienced by those that have been friends for so long yet have to accept the fact that change is inevitable is the buildup to a coming of age story that never seem to end since in many ways we never stop growing or learning no matter how old we get. The lessons we learn as we go along become the life that we lead from day to day.

This movie features one of the best “Gotcha!” moments in film history since Meredith is just a nasty, mean-spirited woman that is doing her best to get the man she wants revenge on in as much trouble as possible. Some might have decided to try and defend the character’s actions in some way or another but the truth of it is that even trying to be balanced would be stating that her being vindictive was in some way a positive thing for all women. In truth she reaped what she sowed at the end since she decided to try and ruin a person’s career and ended up instead being the one that was raked over the coals, by her own hand no less.

Ever notice in military movies how things happen and then the chain of command seems to at least try to move the blame down to the people that can defend themselves the least? It doesn’t always happen this way but the fact that Nicholson’s character decides to try and justify his actions against one of his own soldiers by stating that he’s doing such things to defend the country is the kind of deplorable act that kind of tarnishes the whole idea of the military and what they stand for. Hard decisions do need to be made from time to time, that’s for certain, but such decisions can also be made with some level of decency and dignity.

When Molly’s boyfriend Sam is killed for discovering his friend’s illegal activity, despite not knowing what it really is, he becomes a ghost that sticks around the mortal plane in order to solve his own murder and discover just why he was killed. When it’s discovered that he was killed for what he found out Molly’s life is in danger as Carl is after the money that Sam has taken and given away courtesy of his new friend Oda Mae, who is a psychic that helps Sam to convince Molly that he’s still around. When Carl is dead and Molly is safe Sam is able to finally rest and make his way to heaven as intended.

If women want equality in all things then it’s going to be a hard road to find it, and G.I. Jane is one of those films that might just be one that people want to pay attention to. In terms of war and what one enemy will do to another this is the picture that shows what it means to be equal on the battlefield. When she’s selected for Navy SEALS training Moore’s character has no idea what she’s in for, but the prejudice and bias that come with her being a female are nothing new until she comes to realize that she’s going to be brutalized and made to understand just what she wants in order to prove that she’s every bit as tough as the men she’s trying to serve with.

Demi Moore has played some seriously hard characters in her time and if anything it seems to have made her a tougher person in some ways.