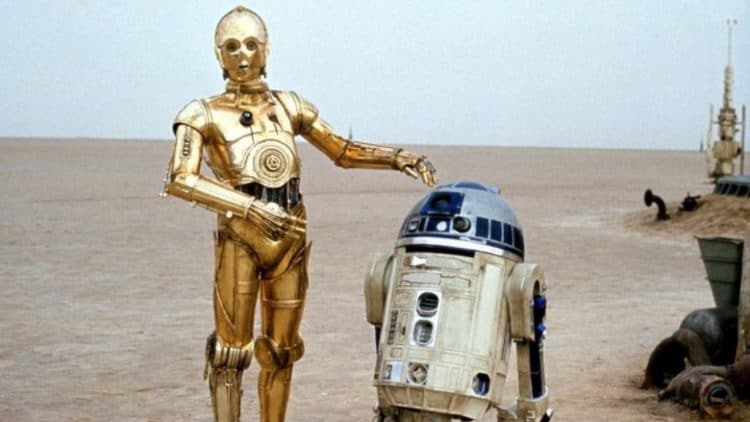 R2-D2 and C-3PO have almost been in the right place at either the wrong or right time for a good deal of the Star Wars saga, as the astromech and protocol droids have been fully integrated into the story in one way or another since the first episode. Whether you want to think that they’re the real stars of the saga or not is kind of irrelevant since they’ve been around long enough to be vastly important to the story in a big way and taking them out would wreak havoc with a massive part of the story line. When you think back R2-D2 is a big reason why Queen Amidala was able to leave Naboo in the first place since among the astromechs trying to repair her ship on the fly so that she and her people could escape the blockade of the planet he was the only one not to get blasted. From that point on he became tied to Amidala for a while, at least until Anakin Skywalker and C-3PO came into the picture on Tatooine. The protocol droid’s part in the story wouldn’t really get any bigger until the second episode when Anakin and Padme returned to Tatooine following a Force vision that Anakin had of his mother. It was there that he would reunite with C-3PO and eventually take the droid with him after the death of his mother. Elle Collins of Looper has a lot more to add to the overall story of the two droids.

Their adventures have taken them throughout the galaxy at this point and the droids have even been given special recognition by taking on episodes of their own at times. They’ve even had their own show and comic at one point as they’ve become a rather iconic duo in the Star Wars franchise. The reality that they’ve helped shape the story in a big way doesn’t even give rise to much of an argument since without R2-D2 there’s a good chance that the Trade Federation would have been victorious and Amidala wouldn’t have left her planet, therefore she wouldn’t have met Anakin and the story might have gone very differently. There have been plenty of times when they’ve been pushed to side or even the back in favor of other characters and even the story itself but if you look at the overall saga then you can see just how vital they’ve been and how many times they’ve managed to save their human friends from danger. The trash compactor on the Death Star is a good example since without R2-D2’s uncanny ability to hack into just about anything Luke, Leia, Han, and Chewie would have been smashed flat or crushed between layers of refuse. If not for C-3PO there might have been a lot less anxiety, but it’s possible that his translations would have been sorely missed and a huge language barrier would have existed that might have kept the Ewoks from helping the Rebels take out the shield generator in Return of the Jedi.

The overall importance of the droids can’t be overlooked even in the third trilogy since again, R2-D2 is vital given that he has information on Luke’s whereabouts and he’s still a capable droid despite being an outdated model. Thanks to having outstripped his programming with a great deal of experience and upgrades that weren’t likely standard for an astromech of his make, the droid became an invaluable asset and friend to the Resistance that was hard to rival since the only thing that really sets any other droid over him would be an advanced design. C-3PO on the other hand became vital since he was the only one that could translate ancient Sith, even though his programming didn’t allow him to do such a thing until Babu Frik managed to unlock the translation by wiping his memory. One could say that the golden protocol droid became a hero in his own right finally since sacrificed his memory, basically saying goodbye to his friends, in order to help them with a problem they couldn’t solve on their own. Thankfully that was temporary however as R2-D2 managed to restore his friend’s memory not long after and C-3PO was more or less back to the droid he’d been before the wipe. It’s not the first time that he had his memory wiped unfortunately, but it would appear that anything that Bail Organa had wiped from his memory wasn’t bound to be recovered. Edward Lauder of Small Screen had something more to add to this.

Sometimes the most important characters in a story aren’t always the most noticeable or those that are held up on a pedestal, but when talking about Star Wars the two droids are without a doubt two of the most well-known parts of the history and also two of the most influential since they’ve been around since the saga began and have endured and experienced a great deal. Hopefully if Star Wars moves forward one day we’ll get to see more of them.