Home
Movies
The Enola Holmes Blooper Reel is Worth a Watch 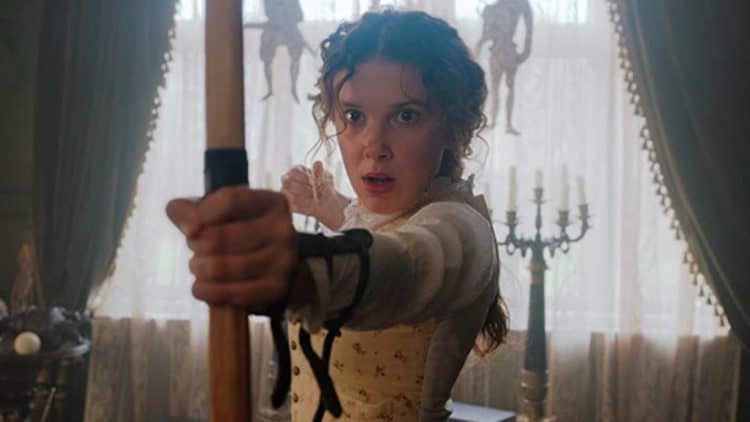 Let’s say this for Millie Bobbie Brown, she knows how to laugh off a moment when she or another person might flub a line, just like the rest of the cast. Enola Holmes is definitely a different type of character that has been seen to join the legend of the famous detective and it’s likely that some people are thinking that it’s a great way to continue the story and show it from a different perspective while some might be a little more skeptical. So far it would appear that those that are ready to enjoy something different have been doing so, but obviously one of the best parts of any show or movie happens to be the blooper reel since it shows that even the most celebrated stars are bound to screw up now and again for one reason or another. Plus, bloopers are a good way to take a look at the sillier side of a more dramatic show that does look as though it takes a moment here and there for brevity but is otherwise meant to be action and suspense as well as mystery all rolled into one. So far Enola Holmes looks as though it might be a lot of fun to watch and it could be a fitting addition to a story that has been around for quite a while.

Unlike her big brother Sherlock, however, Enola is out to find her mother when she goes missing and is also bound to prove that she’s every bit as tough, intelligent, and cunning as anyone in the Holmes family as the trailers have shown her skills in minor detail and appear to promise even more. The whole story of Sherlock Holmes is one that people can’t help but appreciate since it’s one of the many that has withstood the test of time and has continued to be entertaining even without being dressed up by pop culture. Updating the idea is still a great way to help the current generation get into the story and relate to the characters a little better since otherwise there are moments when the original is actually quite dry and hard to comprehend. Keeping in mind that the story was written quite a while ago it’s very easy to understand why since the time period in which Sherlock was created doesn’t always translate that well to the current era and sometimes needs to be given a once-over in order to allow people to really get into the material. It’s very possible that when Sir Arthur Conan Doyle created the first story that people were intrigued and wanted to know more, but the 19th-century style of writing that Doyle was well-versed in sometimes takes the average reader some time to comprehend due to the different style and the use of prose that many authors from that time period were adept at using.

Nancy Springer has taken things a few steps further and now we get to see a younger generation of Holmes as she goes on her own adventure in order to seek out her mother, who obviously taught her so much. It does appear that many are thinking that Millie Bobbie Brown is the perfect actress for this for a number of reasons, and it’s not hard at all to see why that might be the case. Since her start in Strangers Things it’s been noted that she’s quite the talented young woman, though she is attempting to push her career in an upward manner as she’s been seen in Godzilla: King of the Monsters, and has continued to do what she can to make her reputation go even further. But like all actors, she isn’t immune from a case of the giggles and an occasional slip or mistimed moment that might ruin a shot or force them to go back and do it again. The great thing is that this is fairly common in a lot of movies and shows, and it’s likely that some directors even expect it to happen from time to time since the fact is that not everyone is perfect, and getting the shot the first time isn’t always possible since there are those directors that want to make certain that they have multiple success shots to pick from. Plus, blooper reels are perfect since they show the fans moments behind the scenes that are fun to contemplate and are definitely funny in some regards since the actors do tend to mess up now and again.

In some movies, the blooper reel is actually one of the best parts since it makes people laugh in a good-natured way as they watch their favorite actors go through the motions once, twice, and then again and again until things are finally right. Plus, the idea of watching people flub their lines is kind of funny as long as they’re able to laugh at themselves.