Home
Television
The Cast Of “Married… With Children”: Where Are They Now? 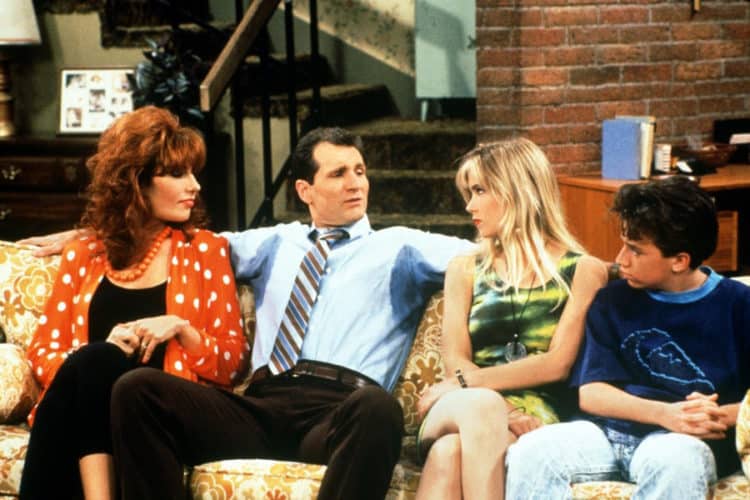 The show has not been without its controversies, however. It attracted the ire of conservatives, who denounced the show as obscene. It also attracted criticism for sexist elements that were featured on the show. Even former cast member Katey Sagal called the show “misogynistic,” saying: “The women were portrayed [as] completely exploited on the show. That was Al Bundy’s thing. He liked hot women, and they showed them all the time.” It’s been more than two decades since Married… With Children aired on TV, and the cast has since moved on to different projects. Here’s what the cast of Married… With Children have been up to since the show last aired.

Ed O’Neill, of course, played the Bundy patriarch Al Bundy on Married… With Children. While O’Neill played a loser on the show, behind the scenes, he was anything but. In fact, he even maneuvered his way to higher pay in a series of sleek negotiations with Fox. Talking to Wealthsimple about how he snagged the role in the sitcom, O’Neill said: “I remember when I was living in New York and I was first offered the part as Al Bundy on a new sitcom called “Married… With Children.” My agent didn’t want me to take it. Things were going well in New York and they thought I should pursue more serious roles on stage and in films. I was making $400 to $600 a week on Broadway and “Married… With Children” was offering me $10,000 per show for a pilot and six episodes. I told my agent, “Hey man, I’m 32 years old. Nobody knows who the **** I am. I’m not gonna turn this down. It’s too much money.”  For younger audiences, O’Neill would be recognized as yet another patriarch, Jay Pritchett, in the hit mockumentary series Modern Family. The show eventually became ABC’s longest-running TV sitcom. The 75-year-old actor keeps himself very active in front of the camera, appearing in films like The Last Shift and Sun Dogs. He has also frequently lent his voice to animated flicks, like Wreck-It Ralph, Ralph Breaks The Internet, and Finding Dory.

Katey Sagal played Peggy Bundy on Married… With Children, Al Bundy’s nagging wife. In an interview with ABC News on Sagal’s first impressions of her role, she said: “I remember reading the script and thinking, ‘This is hysterically funny, but no one will watch it because it’s just too outside the box. We’ll get cancelled immediately,'” she said. “It was on a network nobody had heard of.” She also sang praises of O’Neill, whom she says was a pleasure to work with. “We had great chemistry together,” she said. “I just remember going to work and laughing all the time and I’m not exaggerating.” Despite having had a great time on the show, Sagal says she believed the show was “misogynistic,” citing sexist themes that frequently emerged from the show. Today, Sagal continues to be very active in front of the camera. After Married… With Children, Sagal appeared in the drama Sons of Anarchy, for which she won a Golden Globes Award for Best Actress. She’s also appeared in Brooklyn Nine-Nine, Shameless, and Rebel. On the big screen, she played roles in Pitch Perfect 2 and Bleed For This.

Christina Applegate was catapulted to stardom for her role as Kelly Bundy on Married… With Children. Applegate, now 50 years old, has appeared in major films and TV shows since her Married… With Children days. She’s played main roles in blockbuster comedies such as Vacation, Bad Moms, and A Bad Moms Christmas. She’s also starred in a few TV shows like Samantha Who? and, currently, Netflix’s Dead To Me. Applegate has been open to the public about his various health concerns. In 2008, she announced that she was diagnosed with breast cancer, from which she has since made a recovery. Recently, she was diagnosed with multiple sclerosis. Opening up about the disease, according to CNN, Applegate said: “Sending so much love to all of you this day,” Applegate said. “Many are hurting today, and I am thinking of you. May we find that strength to lift our heads up. Mine currently is on my pillow. But I try.”

David Faustino played Bud Bundy on Married… With Children. After the show, Faustino has been more active in lending his voice to various animated projects, most notably The Legend of Korra and DreamWorks Dragons. He also appeared on Modern Family in one episode titled “Bad Hair Day.”

Amanda Bearse played the Bundys’ next-door neighbor, Marcy Rhoades D’Arcy. She has sparingly appeared in projects after her tenure on Married… With Children. Bearse has played roles in Drop Dead Diva, Anger Management, and Sky Sharks. Talking about whether a modern reboot of Married… With Children would work, Bearse told The Fayetteville Observer her thoughts: “I mean, it was a raunchy, mean-spirited show, don’t get me wrong,” Bearse said. “It couldn’t have been made today, I’m not sure it should have been made then, but it made a lot of people laugh. It still does.”