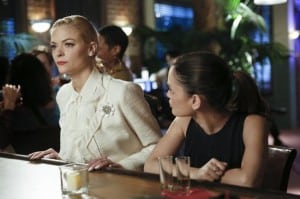 As expected, things around BlueBell are quite awkward after Zoe and Wade’s breakup. In a marked change from the first season of Hart of Dixie, the town is squarely behind Dr. Hart in this instance, sending her innumerable sympathy pies, voodoo dolls, and condolences for the messy end to her relationship with the bartender. (George offers to punch Wade for her, while more than one member of the town tells Wade off publicly for the way he treated Zoe.) All of the outpouring of support, unfortunately, has only made things worse between Zoe and Wade, as the two can’t even be in the same kitchen together without nearly smothering on the tension.

Dr. Hart goes to a nearby lake to clear her head and get time away from the circus that has become her life; there she runs into Tansy and Dolly Parton out for a walk. The two end up at a local bar to kill a few brain cells and pick Zoe’s mood up off the floor, but they can’t completely block out the presence of Wade Kinsella when Lily Anne performs one of her many angsty anti-Wade anthems to the adoring crowd. The thought of embracing her hatred for Wade nearly gets the best of Dr. Hart, though Tansy talks her down from the ledge when she mentions that you can either let hatred run your life or you can let yourself breathe and move on. Lily Anne had been singing the same bitter songs for four years and Zoe didn’t want to end up like that, so she decides to put on a brave face and embrace the change in her life.

Breakfast the following morning with Rose turns out to be a great way for Zoe to distract her mind and fill her life with other people’s drama…until later that day when she sees Tonya, Rose’s friend, for a penicillin shot related to strep throat. Rose’s boyfriend Max had been doing a science fair project about frogs at the lake, remaining fairly absent from her life in doing so; Rose thought nothing of it, but Tonya mentions to Zoe that she’s been hanging out at the lake, too. Trying to get a guy to dump his girlfriend and be with her. Zoe didn’t think much of it until she runs into Max, who had seen Jonah, later that day in the office. The reason he was there in the first place? Strep throat. During the appointment with Tonya, Zoe told her to send her boyfriend in for a check up later that day, so seeing Max, in her mind, means that he’s cheating on Rose like Wade cheated on her.

Although Jonah can’t legally have Zoe tell Rose about Max being at the office, Zoe does the next best thing in trying to bust the teenager and save Rose from the same tragic event that she went through. She meets her outside of school and all but drags her to the lake to check up on Max and see how his project is coming along. Tonya’s there, of course, and Rose immediately jumps to the same conclusion that Zoe did about Max cheating, but there’s one little thing. Tonya hates Max and mentions that he’s always doing his project when she and her boyfriend are trying to make out. Rose is, understandably, extremely upset with Zoe, who uses this event to really look at herself following the breakup with Wade.

Of course, that newfound sense of enlightenment comes after a drink at the bar with an also worn down Lemon, who imparts advice on her former enemy. Eventually, through time, patience, and effort, you find a way to go on; regardless of the heartache or the pain that you’re feeling right now, it’ll eventually get better and you’ll be able to deal with it. As a result, Zoe goes home, gathers the remnants of the fire she set earlier (with Wade’s stuff), and goes over to Wade’s house. She gives him the box of charred clothing and tells him that while she doesn’t like him right now, she also doesn’t hate him.

Gamblin’ Man
Lavon is on Zoe’s side in this whole thing and finds it hard to be around Wade for an extended period of time. While bringing over a mini-fridge to help ease the kitchen traffic situation, Reverend Mayfair drives by on his bicycle and lets them know that he has selected the two of them to help run the church casino fundraiser later that night. They try to get out of it, but both Wade and Lavon do end up showing up to help raise money for the Lord through blackjack and whatnot. Lavon runs one of the tables while Wade mans the donation lockbox by the door, making him a perfect target for the scorn of the BlueBell public. More than one person who passes into the makeshift casino has a word or two for him about his treatment of Zoe (including Frank telling him that God hates him); to keep from going insane, Wade goes on a short break. During that time, the cash goes missing and while Lavon intimates that Wade stole it, it turns out that Sergeant Jeffries mistook the box for his luncbbox.

Lavon apologizes to Wade for thinking that he stole the money and tells his friend that they’ll get through the current awkwardness between them in time.

Pensacola Bound
Much to her dismay, Lemon can’t seem to get rid of Shelby. After putting up with her desire to throw out a 100-year-old family heirloom rug and befriend Magnolia to turn the youngest Breeland against her, Lemon decides to wait it out. Brick and Shelby cut their two week vacation to New Orleans short, which must mean that he finally got annoyed by her quirky personality and that a breakup is imminent. Right?

Not quite. Brick had a great time and tells Jonah that he wants her to move in with him; the only problem is that he won’t be able to get both of his daughters to agree to it, so the plan is to wear down Magnolia through appealing to her materialistic, shallow side. The two Breeland sisters confer when Lemon finds out about Brick’s intentions, with Lemon emerging with a plan. In hopes of snooping around and gathering incriminating information to bring back to ‘Bama, she wants to get George Tucker to go with her to Pensacola to see the condo that Shelby put up for sale. He doesn’t want to do it at first, but once she pulls out the “left me at the altar” trump card, they’re bound for Florida.

Once there, they find their way to a walk-in closet filled with scrunchies, approximately one trillion bedazzled shirts, and bank documents that indicate Shelby’s very far behind on her mortgage. While Lemon takes this as proof that she’s a gold digger, Shelby is at home attempting to win over Magnolia with shoes, a Tory Burch bag, and tickets to see Carrie Underwood; Magnolia almost cracks there, but she can’t hold on much longer when they buy her a bright red RAV4, sealing the deal for Shelby to move in. Even when Lemon brings back the financial information, Brick reveals that he knows about the trouble that Shelby was in and that she’s the one who insisted on a pre-nup to absolve his daughters of any responsibility for her messy finances.

After having a talk with Zoe about moving on, Lemon goes to see George and absolves him of the responsibility for having left her at the altar. If Brick and Shelby get married, though, she threatens to hold that over his head, as him breaking up with her led her to get with Brick.

Additional thoughts and observations:
-“You haven’t killed enough brain cells yet.”
-“You’re not the only Breeland that knows how to exploit the weak.”
-“Now is not the time to give into your God-given materialism.”
-“I don’t want to see frogs doing it.”
-I didn’t get the exact line down, but George calling Shelby a drag queen was just the best.
-Zoe has thus far resisted Jonah’s attempts to get her into bed. Can she keep it up or is rebound sex in the future for Dr. Hart?
-Shula apparently has “connections.” You guys, is Shula in the mob? Is she the Black Widow?
-Most honest line of the night (and the reason I don’t think that last week was anywhere near the unforgivable character assassination that the internet seems to): Lavon telling Wade something along the lines of “when are you going to stop trying to prove that all you’re good at is disappointing people?”.
-This was the last new episode of Hart of Dixie until April 9th, when we’ll get one titled “Why Don’t We Get Drunk?”. Awesome.