Home
Television
The Borgias
The Borgias 3.04 “The Banquet of Chestnuts” Recap 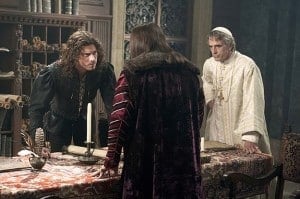 The Holy Father has made Giulia’s brother Alessandro Farnese a Cardinal, much to the chagrin of the other Cardinals, and appointed him to Cardinal Versucci’s old position as Procurator of the Office of Public Works. Giulia told her lover that her brother has a felicity for numbers and accounts, so giving him the job would cut down the risk of theft and betrayal considerably, especially since Alexander informs the young man that he is to avoid reporting to the other Cardinals. Cardinal Farnese is to bring the books, once they’re straightened out, directly to His Holiness, a sign that Alexander’s paranoia about the College of Cardinals is not lessening with Versucci’s absence.

In fact, the Pope’s only requirement for being appointed into the College of Cardinals at this point is loyalty to Rome and to himself. Everything else, he deems, can be learned; what makes Alessandro such a good accountant, in the Pope’s eyes, is that he shows no ambitions and didn’t approach his sister about using her relationship to his advantage. She made the decision to mention his aptitudes to Alexander and knowing that, the Pope won’t have to worry about being usurped. However, Giulia makes the mistake of helping Alessandro untangle the rather complicated web of numbers that Versucci left in his wake, causing her to be dragged to Alexander’s chambers in the middle of the night by papal guards. Did she lie to get her brother the position? Not quite, as she mentions the rats nest of numbers and that her help was merely that of a sister with no interest in betraying the Holy Father.

To make up for her actions, she volunteers to find a way to test the loyalty of the latest Cardinal appointments, which turns out to be a Banquet of Chestnuts. Such an event was designed to compromise the Cardinals and have the figurative sword always hanging above their heads, the slightest misdeed or hint of disloyalty cause for the string holding it to be cut, sending the weapon into their head. Giulia hires 21 prostitutes and dresses them in nun costumes for a dinner with the newest Cardinals; with Master Burchard hiding in the shadows and chronicling the events, she calls “Sister Angela” to the forefront, asking her for a donation. As Angela only has the clothes on her back, that will have to do and Giulia opens the bidding on her veil at 10 ducats, which Cardinal Grimaldi bids and wins. Giulia then moves on to the habit, itself reaching some 80 ducats after the Cardinals see how beautiful Angela is and get urged on by Giulia, who knows how much gold they have in their possession.

The party began at 10:00 p.m. and the debauchery followed at midnight, with the “nuns” all taking their clothes off and auctioning their bodies to the highest bidder. It was then that Giulia dropped some 200 chestnuts on the floor and challenged the women to pick them up using only their nether regions and feed them to the Cardinals, the most successful of whom were given prizes. Among such were six silken dublets, seven pairs of shoes, and three feathered hats. After hearing the account of what happened, Pope Alexander claims that this will be for his eyes only, thereby securing the loyalty of his latest appointments for some time to come.

On the Road Again
Versucci makes his way to a convent known as the Little Sisters of the Poor, where he gives them the title deeds of a nearby alum mine that was confiscated from their possession and given to the Holy Father some time ago. He tells one sister that he feels as if he’s hurrying toward his destiny, while in Rome, Cesare is outraged at finding out just how bare Versucci stripped them. Alexander, however, just laughs, impressed at the gall and ability his old friend showed rather than upset at what happened. The Holy Father does get Cesare to find the “old goat” and show Versucci the error of his ways, which Cesare tasks Micheletto with. The assassin traces the disgraced Cardinal to a monastery, where he is then directed to the Roman baths, a site that Versucci was going to be at come dusk. When Micheletto arrives, Versucci is already sitting in the bath, having slit his wrists. During his final moments, he claims that he did no stealing, as the money was already stolen by Alexander from other sources. He asks Micheletto if he had hurt His Holiness where it hurts the most (the pocketbook) and Micheletto tells him of Alexander’s laughter.

For the Good of the Family
The day after Lucrezia and Alfonso were wed, they’re questioned as to their experiences in the bedroom. While Lucrezia encounters a busy Alexander and blushes upon the inquiry, Alfonso tries to dance around giving a direct answer to Ferdinand, who has heard things about the Borgia daughter’s prowess. He cannot keep the charade up for long and confesses to his cousin that the marriage was not consummated but that it will be soon. That night, he goes to Lucrezia’s chambers and apologizes for their wedding night being disrupted, wishing that it never would have happened. She offers him a place in bed that he takes to mean that she was in the mood and he gets on top of her, causing her to withdraw from the situation. She claims that something more happened the previous night than a question mark on a place setting, her cloud descending upon her. When he tries to become physical again in a bid to make her cloud go away, she pulls back once more, refusing to help him love her physically. She tells him that their love must be more soul than body, like that of a brother and sister.

Upon hearing this, Ferdinand is furious and storms into Alexander’s chambers, alternating between preaching at him and insulting Lucrezia and Giovanni. They do come up with a solution, though – one witness from each family will watch Lucrezia and Alfonso consummate their marriage. It may seem off-kilter, but there is precedent and Alexander is (begrudgingly) okay with the arrangement. Naples is an important ally to him and he’ll do anything to solidify their alliance, which is the opposite attitude of a furious Cesare, aghast that his father would choose an alliance with the “infected swamp” that is Naples over his own daughter. He volunteers to tell his sister about everything and gets slapped by her upon revealing the news; even when he kisses her and tries to calm her down, she merely tells him that she’ll do it and that she wants him to be the one to bear witness, causing him to cry.

Lucrezia can barely contain her hurt and desire for vengeance while getting ready for the night, but she has to  if Ferdinand is going to back down. The viewing is set to take place in a room in the Vatican with a bed (and only a bed) in its center, a curtain separating the audience from the two lovers. It’s only King Ferdinand on one side and Cesare on the other, the former making kissy noises and referring to Lucrezia as “beautiful” when her maid strips off her clothes and the latter barely able to watch. At first, the encounter between Lucrezia and Alfonso is rather awkward (he cannot stop staring at Ferdinand, for example), but the two figure things out and he brings her to climax in his first time. Ferdinand is impressed with his cousin and considers the matter dropped, while Cesare has let go of any thoughts of being with Lucrezia after seeing her physical connection with her husband. He tells his sister that what they had belongs in the past and that maybe now they can find happiness before heading to France to grant the annulment and find a bride.

A Crusade and Some Blackmail
Alexander has been visited by the envoy from Venice, who tells him of Turks raiding their coastal towns, looting their shipping vessels, and seizing three convoys. If they’re allowed to continue, trading will suffer and therefore, Rome will suffer. Alexander takes time to consider the problem and at a dinner with bankers, guilds, and merchants, makes a speech about the need for a Crusade against the Turks, thereby driving them back to their homeland.

Meanwhile, Catherina Sforza and Rufio meet with the Duke of Mantua, their latest in a long line of allies against the Holy Father. His wife, Duchessa Bianca, shows up in the Pope’s quarters that evening wrapped only in a cloak and the two make love, much to the Duke’s chagrin (and Rufio’s, the one who set this up, satisfaction). The following day, the Duke arrives in court demanding an annulment for the infidelity that his wife had committed against him with the Holy Father the night before the Battle of Fornovo. He then tells the Pope to, if/when he sees the Duchessa, inform his wife of his desire.

Additional thoughts and observations:
-The entirety of this episode could have been Jeremy Irons saying the word “lagoon” for 50 minutes and I would have enjoyed it just the same.
-I think that Alexander didn’t react to Versucci’s deeds because he knew that he could call for a Crusade, thereby making himself look good and allowing Venice to be forever in Rome’s debt. Plus, immediately after their victory, they could divvy up what the Turks had and give the coffers the shot in the arm that they need.
-If Lucrezia’s refusal to reciprocate Alfonso’s wish that the previous night didn’t happen wasn’t enough, the line about wanting to be brother/sister with her husband made that entire scene my favorite of the episode.
-That being said, Cesare telling Lucrezia what she must do for the good of the family was surprisingly emotional and colored my view of the encounter with Alfonso. When she kept looking at her brother while her husband was giving her pleasure, I wasn’t sure what her motive was: to satisfy a voyeuristic kink, to get revenge on him for agreeing on this by enjoying herself, or to let him know that she was thinking of him the entire time. Or some combination of all three.
-On a completely shallow note, Alfonso has a rather nice butt, especially since rare is the actor with body hair back there that gets to show it off.
-The most beautiful (and ironic) shot of the episode was Micheletto being framed inside the cross peep hole a Versucci’s monastery.
-How long can Giulia conceivably protect her brother from Alexander? She got herself in a pickle with the math, but she warned him to stay away from the Banquet. Can she keep ahead of the Pope and give her brother enough time to figure things out?
-Next week on The Borgias: Cesare’s mission to France is a success in more ways than one, while Alexander conspires for payback against the Duke of Mantua and Lucrezia plots against Ferdinand, who still refuses to recognize Giovanni, with the help of Micheletto.