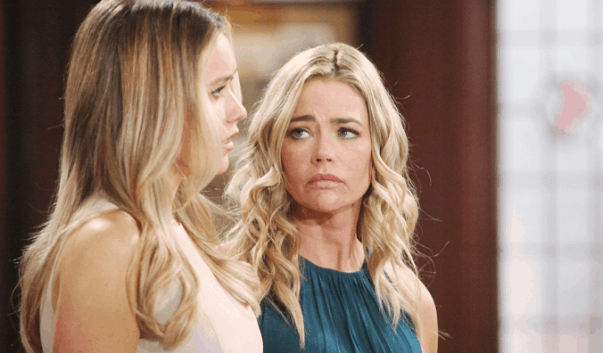 The Bold and the Beautiful fans know that Shauna is new, and we get the impression that she has not had the best life over the years. She’s been in Vegas, she was friends with Quinn, and she was someone who had a daughter and a life long before her life ended up here. But, we don’t know if there is anything else we can say about her other than that we cannot help but like her. She is not our cup of tea, but we like her. We like that she is going to do what she can to make her life the way she wants to go, and we like that she is the kind of woman who will do anything to get things to work in her favor. She’s loving being a Logan, even if she is not a Logan. She is the mother of one, and she is loving that up. But, we know that there are a few things we think about her that we want to discuss with you.

There are a lot of women around here who want to be her friend, and not one of them is worried that she was Quinn’s friend first. We have to wonder if there is anything that they think about this. They don’t love Quinn so much, and they really do like her friend. They all want to be her friend, and we cannot help but wonder why. Why do they all want to be friendly with the new girl in town? Because everyone loves that Flo is a Logan, and Shauna seems to fit in so well with everyone else around here. But, we think that’s because she is manipulative. She is not someone they should trust, and they know that. They just don’t want to admit that this woman who came to town is just hanging out around there doing nothing but living off of them.

She’s Not Caring For Her Daughter

It’s a little bit questionable to us that she is a mother who did not know that her daughter was pregnant or in LA. She didn’t know who the father of her daughter was, and she did not know that there was anything else going on in her life. She was a mother whose daughter left town without any word to her mother, but they seem to feel that they are a close mother and daughter duo. However, we have more questions than we think they do, and we are not sure that we can focus on anything other than the fact that she just did not know these things about her own child. That is not right to us, and we cannot figure out why no one seems to know.

She’s Out for Herself

She knows that her daughter is a liar, and she knows that her daughter did some things that are not very nice. She knows that her daughter is a woman who did not make some good decisions, and she knows that there are things that don’t work for her. But, we don’t know how to focus on anything other than the fact that she knows her daughter is being eaten alive by guilt, and here she is not really caring much for those things. She’s not really looking to do much more than spend some quality time with her new family living the good life she’s been living. She would rather her daughter suffer in silence and misery with this guilt she is carrying in her life than tell the truth, fix a broken family, and make her daughter do the right thing. We don’t love that. She’d rather have some money and some life and some prestige, and she wants that at the expense of her child. We think that there is a good chance that she might even make it seem as if she didn’t know, that she is super upset, and that she did not see this coming at all when the truth does come out. She doesn’t strike us as the mother of the year kind of material, but no one else seems to be aware of that just yet.