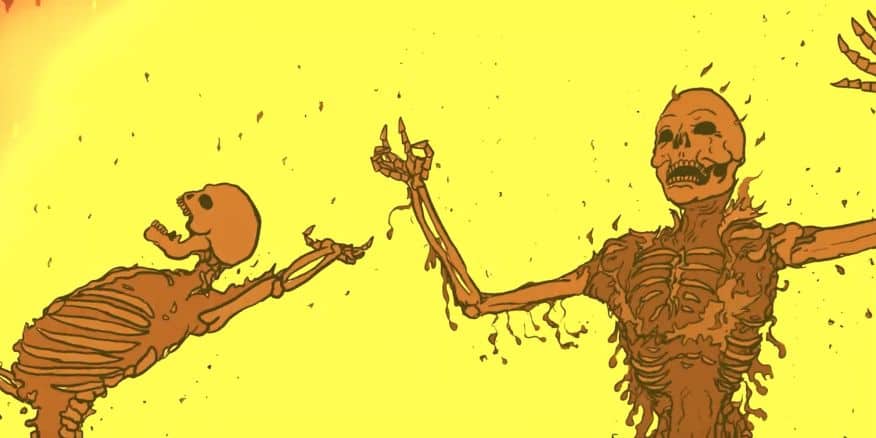 What we can say so far is that The Spine of Night looks like an extremely violent fantasy that will pit warriors from different cultures and from different times against a malevolent force that appears to be bent on domination and destruction. In a big way, this looks like something that would have been released decades ago, but is being delivered to the fans in the here and now in roughly the same fashion. The cast includes such names as Patton Oswalt, Joe Manganiello, and Lucy Lawless among others, so it’s clear that the story should be well told and that the character could possibly be fun to watch and listen to. But in terms of the violence and the overall story, one can’t help but think that there will be a bit of a public reaction to the graphic nature of the movie. Violent animation is something that has been seen more than once before, and as such it’s not exactly a surprise to see it again since the desire to watch violence in different ways is nothing new, but there are differing viewpoints when it comes to how this type of violence is displayed.

The main point of the movie as it’s seen in the trailer is that a dark force has been unleashed and it’s up to humanity to stop it, though of course, this is bound to be difficult, bloody, and epic in the manner that it will be accomplished. But despite the story appearing to take one turn and twist after another, the main point will continue to revolve around the salvation of humanity, no matter how bloody things have to get. As of right now, it would appear that things are going to take one violent turn after another, and while some might have an issue with, and you know that will happen, the beat will go on as this anthology spins for whoever is swilling to watch.

One thing about violent stories is that the struggle that’s pushed through with each one is the type of tale that people will pay attention to given that no matter how it’s produced, people are going to take a look since the allure is too great to stay away for long. This style of animation however is something that is said to be a lot of work, which is why we don’t tend to see movies in this manner all that often. But it’s also why they’re so interesting, at least in part, when they happen to be shown to the general public. It’s like a treat that comes along every so often, a work of art that is produced now and then after a long while, a unique bit of cinema that people might pine for from time to time, but aren’t generally given on a regular basis since it does take quite a bit of time and effort to make it happen. It also feels that if rotoscoped movies such as this were created in a streamlined manner that it might ruin the effect and cheapen it to such a degree that movies like The Spine of Night might become nearly obsolete. As it stands now, they’re an interest that people find to be intriguing since they don’t come around all that often.

As to the hyper-violent nature of the story, it’s not bound to be much worse than anything else that’s been released in the last few decades, though the idea of the story being animated is likely what’s drawn the attention of some since animation is usually held to different standards and is typically seen to be this violent when it’s anime or something else that’s nearly as rare as this project. Releasing on the 29th of October, this project will be featured on Netflix where one can guess that it’s going to be viewed with a bit of trepidation by some and with an eager eye by others. Thinking that it’s going to be a big point of controversy though is ambitious since like it or not, violence is encoded in our DNA, and whether a person wants to deny it or accept it, movies like this are appealing for a number of reasons.

Just watching the trailer makes it clear that this movie will be appealing to the baser nature of humanity, but also to other parts of human nature that are just as strong. It’s amusing in a way, but some have stated, and have been stating for decades, that society is on a downward spiral that doesn’t appear to have an end. Movies like this might prove them right since it would indicate that things are moving in a direction that very well might indicate that things are headed in a very violent direction. But at the same time, it’s a movie, and the violence is no worse than anything that’s been seen in the last thirty years.