Home
Television
Teen Wolf
Teen Wolf: And The Kanima of Beacon Hills Is…

Wow, did that just happen?! Teen Wolf simply delivered tonight to the point that I can’t get this stupid grin off my face as I type this article. It was that damn good.

After red herrings galore and clues being dropped since season one, Teen Wolf finally revealed the identity of the Kanima, the creature that has been on a murder spree in Beacon Hills as of late. All signs pointed to Lydia, who had acted hella weird after surviving a bite from Peter the Alpha last year. However, like fellow TVO writer Shilo Adams and I pointed out earlier, Lydia being the Kanima would have been too obvious for a show like Teen Wolf, especially considering the way the story line has played out.

So who was the Kanima? It was none other than TVO Kanima suspect #2: Jackson!

At this point, Jackson is the poster boy for the old adage of “be careful what you wish for,” because everything he’s done to be able to howl with wolves has brought him nothing but a solid knee to the balls from the game of life. Seriously, the guy can’t win. In less than a year, Jackson has went from being the most popular guy in school to now a freak of nature in the eyes of both humans and werewolves. In light of all that and despite my complete ire of the character, at this point in the game I have no choice but to feel for this guy. Just a bit.

But now that he’s the Kanima, can Jackson’s life get even worse? Oh, without a doubt, my friends. Without a doubt. Although, and this is a serious ‘although,’ if Jackson ever learns of his alter ego and learns how to control it? The man will finally get the power he’s seeked for so long… and will need to be put down like a rabid dog immediately.

Next: is it just me or is Derek turning out to be an incompetent Alpha? His pack of overly confident, yet brainless brats are bumbling henchmen and he seemingly doesn’t have a grasp of werewolf mythology as you would think he does. How could Derek miss that Jackson was the Kanima, 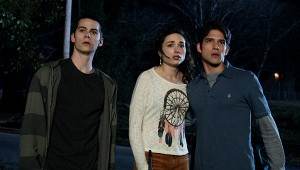 especially if he was the one who gave the kid the bite? Maybe Derek doesn’t want to admit to him screwing up something for once? Who knows? I do know that I will want an explanation on how Derek got his ‘facts’ mixed up about the Kanima test.

Finally, who the hell is Jackson’s/the Kanima’s handler? I want to say it’s Bianca Lawson’s character only because of her “translating” that the Kanima wanted a friend. But, again, that seems like it would be a tad bit obvious. Also, the hand that grabs Jackson and yanks him out the window? Clearly a male’s hand, which leaves the question: is the handler someone we’ve already seen? Or someone we don’t know?

– Allison putting Erica in her rightful place: on the floor, with her ego busted into a million pieces that not even James Frey or Jewel could write a book/song to.

– Allison telling Scott that she can take care of herself by wielding her weapon like a pro with confidence. Allison is hands down the baddest chick on Teen Wolf now.

– Derek acknowledging that Scott is the leader of his own pack, which has been true since season one.

The Kanima is Jackson. Lydia is safe (but still having visions). Scott is still bad ass and I can’t wait for next week’s episode.

How about you? What was your take on Teen Wolf tonight? Are you still freaking out or what?