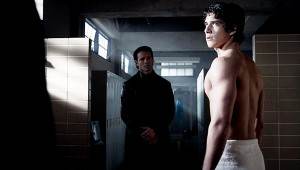 Last night’s Teen Wolf, as well as this entire season, has been comparable to a rollercoaster. The first half of the season started planting questions in a fashion similar to the slow, yet energy charged pace of going up a rollercoaster before the ride begins. Now, the second half of the season is the equivalent of the coaster taking the dip, answering all the questions laid out in the beginning at break neck speed. Everything is coming into focus clearly now and there are still two episodes left. In other words, be prepared to be on the edge of your seat for the next two weeks.

While I constantly had to force my mouth shut during the entire hour, Teen Wolf exhibited what I have come to call The Three R’s, which consist of Revenge, Romance, and Reveals. It also tackled the concept of power and whether or not if it’s all that it is cracked up to be, and just what can happen when someone challenges said power. All in all, the episode was phenomenal and ranks as second to the “Night School” episode as one of the best of the series. Now, let’s take a look at the three R’s of last night.

So Peter Hale is out for revenge and going after everyone who had a part in the Hale house fire. Everyone who has been killed so far this season (sans Laura) were either hired by Kate or another outside source to do damage to the Hale estate. So Peter is understandably pissed off and is looking for some grade A retribution. With all that said, I seriously don’t think raw revenge is Peter’s only game plan, because he’s building an army to do some serious damage to someone, or something. Then there is Derek’s willing participation with Peter’s plan, which was a complete blind side to me given last week’s cliffhanger of Peter trying to “explain” to Derek why he was terrorizing everyone in Beacon Hills. Wonder what was said to Derek for him to back down and fall in line with Peter’s demands. Is it the respect that his uncle is The Alpha? This development could be considered one of the loops on the Teen Wolf rollercoaster, if you ask me.

Scott and Allison made some serious steps to reconcile their relationship and, to be honest, it was really fun 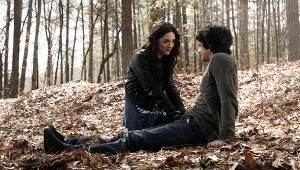 to see them together again. It was also tragic considering how both of their respective factions are trying their damnedest to lure them to their alleged destinies. Allison seemingly has gotten over the trust issue with Scott since she found herself in his room, ready to spill her guts about the weirdness of her family. However, Scott and Allison’s rekindled romance was actually a speed bump now that Scott mysteriously ran out on her again, which was bad timing on so many levels. It’s unfortunate, because it was the secrets and unanswered questions which sent Allison astray in the first place. Now she broke the mold by attempting to show Scott how much she trusted him by opening up to her family issue and in return he offers nothing. It’s going to be interesting to see Scott rebound from that little faux pas.

Reveals (aka ‘The Lost Boys’ Stratagem)

This episode also had enough reveals to qualify being a penultimate episode before a season finale, which makes you wonder just what they have up their sleeves for next week. Before we jump ahead, let’s continue to gawk at what landed on our feet last night.

– Peter used an approach from ‘The Lost Boys’: When it was revealed that Scott’s mother had a date with Peter, I couldn’t help but think about ‘The Lost Boys,’ my favorite vampire movie of all time, because the Head Vampire of that film also wanted to turn the hero’s mother into a vampire to lure the kids over to their ranks. All that was missing was Peter saying “Never invite a werewolf into your house/life, silly little boy! It renders you powerless.” In short, an awesome scene.

– We found out that a werewolf claw to the back of the neck gives off some sort of visions for whoever is on the receiving end of the mark. Peter did it to Scott, which caused the teen to have a barrage of images from Peter’s viewpoint. This could explain Jackson’s reaction to his “scratch” from Derek, including looking like a zombie for a minute, because maybe he couldn’t take the transfer. Also, this little piece of knowledge was basically a clue to Peter’s identity of being The Alpha given that Derek is of Peter’s bloodline.

– The Vet is a werewolf ally? I knew something was fishy with this guy and prayed for an answer for his bizarro behavior. Thank God the writers didn’t forget to answer this question and I can’t wait to see just what the hell this guy’s role is in all the crazy. 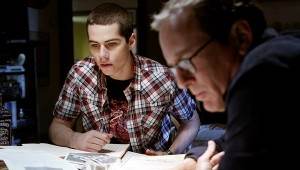 – Stiles and Sheriff Stilinsky’s scene was some of the best well written stuff I’ve seen so far. You were given a nice amount of ‘reveal’ while we saw the character dynamic between the two. Stiles, always thinking on his feet, noticed that his dad gets a bit loose in the mouth with the help of some Jack Daniels. When it became apparent to Stiles that this was his father and not someone like Danny or Derek, he backed off, especially after his dad admitted to missing Stiles’s mother. In some respects, the alcohol was truth serum and it hit too close to home. I’m highly interested in seeing more from these two character in the future. With all that said, I did find it kind of odd for Sheriff Stilinsky to easily get lost in the booze.

– Kate finally showed Allison the family’s secret and that werewolves exist by capturing Derek at the end of the episode. I seriously can’t wait to see Allison’s reaction next week.

Last night’s episode was titled “Co-Captain” for several reasons, one being Scott having to make up for or save Jackson’s ass twice during this episode. The other reason being how Derek and Peter are seemingly working together, and I stress the word “seemingly.”

Scott had enough on is plate than to worry about Jackson’s reckless behavior, especially since the guy isn’t even a werewolf (yet). If I was in Scott’s position, I would stall giving Jackson any information as well, because with Scott’s luck, it would be him getting killed for something Jackson would probably be responsible for. This is why Jackson’s theory on people and power is a bit warped. He’s the prime example of someone who doesn’t deserve to have any more power than he already has. He’s unpredictable, impetuous, and would not know how to deal with the consequences of his actions. The guy is clueless and 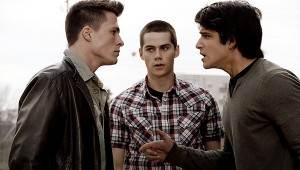 doesn’t get the curse of being a werewolf not one iota, and possibly never would.

When Derek came to “offer” Jackson the gift, I thought he would chicken out, but surprisingly he didn’t. Even though I knew Derek was really out to kill Jackson, I couldn’t help but wonder how did Jackson really expect to get turned into a werewolf. Did he think he would just have to shoot some werewolf blood up his veins? Seriously, this guy is a riot.

Hopefully, Jackson will be more thankful to Scott next week given that Scott 1) saved Jackson from Mr. Argent”s plan of interrogation (torture), 2) saved Jackson from being brutally murdered by Derek (even though I don’t think that was Derek’s true intentions), and 3) actually taking a bullet for Jackson. If he doesn’t give Scott any type of respect for those three actions, someone seriously needs to kick Jackson’s ass with his own lacrosse stick.

I know there is a lot more to discuss about this week’s Teen Wolf, but I’ve wasted most of your time already. What do you guys think about the episode? Two more to go, folks… Two more to go.