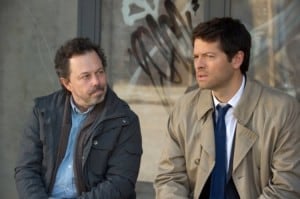 Jeremy Carver, sir, you certainly know how to make an impression. The season 8 finale of Supernatural delivered so many terrific individual moments, gave the fans a spectacular final 10 minutes, tied up some loose ends and left so many amazing possibilities for season 9 that my head is basically reeling.

It’s clear that “Sacrifice” had two separate, though interconnected, stories. One of them was about Heaven, which is where we’ll begin. Metatron was taking Castiel on what he called the second Angel Tablet Trial, which involved taking Cupid’s bow. This allowed for a few moments of really fun comedy as Cas tried to play matchmaker to make a cupid appear, but Naomi’s henchmen had finally found their angel and delivered the news that he was with “the scribe”. Metatron was taken from Cas and strapped to Naomi’s torture chair, so Castiel went looking for Dean for help.

Meanwhile, around the same time, the Winchesters were approaching their own Trial, the third one to be exact. As Crowley was preparing to kill another Winchester ally (Jody! And he was flirting with her before he tried to kill her in a scene that was equally awesome and disturbing), the boys decided to surrender, but they wanted the Angel Tablet in exchange. Crowley agreed, but he fell for the oldest trick in the book: the fighting Winchesters. Instead of signing Crowley’s ridiculously long contract, Dean slapped some demon warded cuffs on his wrist and they tied the King of Hell to a chair.

Sam confessed his sins before beginning the ritual that would cure Crowley (Mark Sheppard proved himself one of the stars of this episode, by the way) and the fissure between the brothers was brought up again. The truth is that Sam and Dean have come together again in the second half of this season, but that doesn’t mean there isn’t still hurt feelings buried between them. There’s about four seasons worth of hurt feelings there that are pushed aside for the next common goal they always have to achieve. But just before Sam began the ritual, in came Castiel. He needed Dean’s help to complete the Angel Tablet Trials and while Dean was clearly hesitant to leave his brother, Sam said he had everything under control. Except he didn’t. Because nothing good ever comes from the boys separating. Alright, in this case technically learning about the fact that Sam might *die* if he completed the trials was a good thing, but we’re splitting hairs here.

The point is that Castiel and Dean handed off the Angel Tablet to Kevin, who has holed up in the Men of Letters bunker at Dean’s insistence. Of course, Kevin isn’t exactly happy about being forced to translate an entire Tablet in 6 hours, but Castiel got forceful and impressed upon Kevin what the rest of us already know: there is no escaping this life. Kevin is a prophet. Sam and Dean are hunters. Castiel is an angel (for now). They all have their duties and they will do them until the day they die because these are not just duties, they are fundamental cores of their personality. We have seen that Dean cannot live a normal life. We have seen Sam succeed at it better than his brother, but I truly believe that for all of Sam’s rebelling against a life of hunting, he cannot escape the basic fact that hunting is in his blood. Kevin agreed to translate the Tablet (who can resist a forceful Cas?) and off the angel and Dean went to retrieve a cupid’s bow. 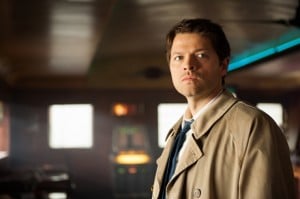 Meanwhile, Up in Heaven….

The nice thing about the exchange between Metatron and Naomi was that it gave us greater insight – finally – into what Naomi was all about. The truth is that her motivations – while appearing evil – have been somewhat conflicting and murky all season. As I see it after their talk, Naomi was essentially an “enforcer” of the archangels. When God disappeared, she planned to “debrief” Metatron to glean what they could have his knowledge of the Tablets, but his fear caused him to leave Heaven. Since then, he’s laid low, and Naomi has simply been trying to make do once all of her bosses disappeared.

But there’s something within Naomi that gets stirred when she gets inside Metatron’s head. She makes a visit to Cas and Dean just as Kevin is telling Dean that the Trials Metatron had Cas undertake aren’t mentioned in the Angel Tablet at all. Naomi delivers the news that Metatron has led Castiel astray, but Cas is reluctant to trust her (and with good reason). We should, of course, stop for a moment to address Castiel’s naivetÃ© in this scenario. I’ve seen a lot of people claim that it’s too similar to his season 6 storyline, but I believe the difference between then and now is Castiel’s free will. Castiel did some awful things in season 6 but they were all *his choice*. He chose to work with Crowley and to go up against Raphael and to open the door to Purgatory. To him, like with Sam in season 4, he may have felt that he didn’t have a choice because it was the “right” thing to do, but that’s not accurate. Castiel chose his path. Here, however, he was manipulated, plain and simple. I believe that Naomi’s control and the severing of that control and the confusion that followed made him more susceptible to Metatron, but the truth is that the Winchesters also eagerly asked Metatron to join with them. They trusted him with their prophet and they were just as manipulated about his intentions as Castiel was.

The difference, of course, is that Cas was used as a direct pawn while the Winchesters were not and while Dean seemed a bit suspicious about the Angel Tablet Trials as Cas was describing them to him, no one had any reason to distrust Metatron. I don’t believe this makes Castiel foolish or weak. I think he was just confused and desperate. He was sad after Dean rejected his apology and he was eager to find a way to fix the Heaven that he had helped break. I don’t think Castiel can be blamed for what Metatron did, even if he is somewhat responsible for the steps that allowed Metatron’s plan to come to fruition.

Speaking of Metatron’s plan, Naomi spilled the beans that Metatron was keeping some important facts from the boys, including the fact that Sam would die if he completed the third Demon Trial. As she raced back to Heaven, Dean and Cas rushed to the church where Sam had been holed up with Crowley.