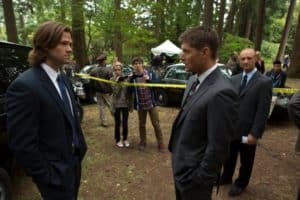 There’s going to be a lot of opinions flying around about this week’s very different episode of Supernatural.  Some fans will have hated it because of the shaky camera or the lack of Sam and Dean.  Others may have enjoyed it as a mash-up of many “found footage” movies you see these days.  Personally, I enjoyed it as a stand-alone episode of the show.  I noted on Twitter earlier that “Bitten” didn’t necessarily feel like an episode of Supernatural, but that’s because it’s characters like Sam, Dean, Bobby or others that make Supernatural what it is and give us familiarity.  So while “Bitten” featured the Winchesters in only a few scenes, I enjoyed it as a completely independent hour like no other that this show has ever done.  There’s no harm in stepping outside the box every once in a while and this is something Supernatural generally does very well.

Like the season 5 episode “99 Problems”, this week’s episode opened with action, and not at the beginning of the story.  Sam and Dean bust into a blood-splattered apartment (that was a spectacular amount of blood, wasn’t it?) to find a dead body on the floor.  The boys noticed a laptop with the words “Play Me” on it and sat down to watch the video.

Then we were transported back to see three college students who happened to the focus of “Bitten”.  Friends Mike and Brian were working on a movie project for school and eventually came across fellow student Kate, who also happened to enjoy making films.  As the kids documented their lives, we were quickly thrust into a crime scene.  The trio stumbled upon Sam and Dean riding into town as FBI agents to investigate a recent suspicious death.  Later, Mike and Brian got separated one night only for Mike to be dragged away and bitten by an animal.

But his bite soon disappeared, leaving the trio confused.  He didn’t really realize what was happening, but his friend and girlfriend (Kate) were surprised to discover his enhanced strength.  Soon after, the fun turned to shock when Mike found himself “changing” in front of a mirror.  In a cool special effects bit, his teeth elongated and claws sprung from his fingernails.

That’s when things got weird.  Brian found himself jealous of Mike’s newfound powers, even if it came with a desire to rip people to shreds.  So the trio listened in on a conversation between the Winchesters and realized Mike was a werewolf (one that was turned by a pureblood werewolf who could better control the change). 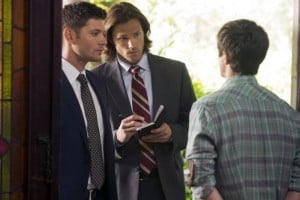 As Mike and Kate searched for a way to deal with Mike’s new lot in life, Brian realized he knew who was behind the killings: his college professor.  So he headed to his office to confront the professor, who seemed sorry for slipping up and eating a human heart instead of his usual diet of animal hearts.  But in order to escape suspicion, he turned Mike so that he could take the fall.  Brian wasn’t interested in punishing the professor, however, he just wanted to become a werewolf like Mike.

The Winchesters soon caught up with the professor and killed him, but Mike went home to see his friends, happy to share the news that he was now like Mike.  Unfortunately, Mike and Kate weren’t pleased that Brian had willingly chosen this path and a fight between the two boys ended in Mike’s death.  Moments after, Brian bit Kate, proclaiming that he loved her.  In retaliation, she slaughtered him, finished the movie and took off.

Which takes us back to the first scene with Sam and Dean, who have spent the last few hours watching this footage.  And watching Kate beg them to let her go since she has promised never to kill a human.  Years ago, they wouldn’t have listened to Kate’s pleas, choosing to go after her while worried that she may not be able to control herself.  But this time they chose to let her leave.

Parallels and Shades of Grey

It’s sometimes difficult to connect with guest stars on Supernatural because, typically, when we deal with cases-of-the-week the guest stars don’t often make a huge impression.  Sure, some of them have been memorable and went on to become recurring characters (like Lisa and Ben or the Trickster), but it’s rare that we get an in-depth look at them during their initial episode.  I feel like we got a good enough look at Mike, Brian and Kate to get to know these characters, even if we only spent 42 minutes with them.  Did I understand everything about their characters?  No.  But the reactions by both Brian and Mike when they became werewolves seemed in line with what we saw about their personalities throughout the episode.  It was a welcome change to see the other side of the case for once – the side that shows the fallout from the creatures that seem to ravage the world that Sam and Dean live in.  And, of course, it’s always fun to get an outside perspective on the Winchesters themselves (which, of course, always seems to include the obligatory gay couple joke).

What’s interesting is that you can take “Bitten” as an entirely separate story that happened to take place in the Supernatural world, or you can take it as an episode that drew parallels between the guest stars and the main characters.  In some respects, Mike was a good parallel for Dean, who may feel like he has this “monster” inside of him since he’s returned from Purgatory.  While Mike – like Dean – could get forceful and dangerous (which we’ve seen since his return), his violence is often a controlled violence. Mike didn’t really embrace his monster, but he seemed resigned to learn to live with it.

Brian, on the other hand, was a bit more like Sam back in season 4 – trying to make himself stronger at the expense of doing terrible things to his body.  Don’t get up in arms, Sam fans, I don’t think Sam is the crazy person that Brian turned out to be, but there can be some parallels there.  Brian also reminded me a bit of Lucifer (another Sam parallel) who was desperate to get out of someone else’s shadow and make a name for himself. 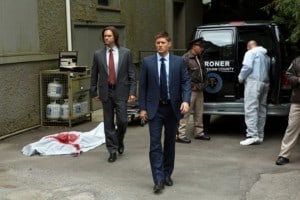 And then, of course, there’s the issue of the grey area.  This has come up in Supernatural time and again.  Dean was really forced to confront his own ideas of black and white when the brothers first met Gordon and the vampire Lenore all the way back in season 2.  That’s when Dean had to wonder if killing something just because it was a monster was the right thing to do.  Later, the writers put Dean in a similar position when he killed Sam’s friend Amy.  We won’t get into the debate of whether that was right or wrong, but there’s a clear difference here between Amy and Kate.  Whether Amy was technically a good person or not, she did kill people in order to survive.  At this point, Kate hasn’t done that.  The brothers were prepared to let her go and live her life until they were forced to deal with her.

Dean’s easy acceptance of letting Kate get away speaks volumes about where he’s at right now.  After all, he’s currently friends with a vampire (Benny).  Benny has, presumably, killed humans before (no matter how much he may claim to be a good guy, he still seems shifty to me and we don’t know what he was like pre-Purgatory).  It would be rather hypocritical then to hunt down Kate if she wasn’t a danger to humans.  Sam – generally the more practical of the two in matters such as these – seemed a bit surprised at Dean’s decision regarding Kate, but he recovered quickly.  Does he think his brother’s decision was out of the ordinary?  Not necessarily.  But he may not have believed that Dean would accept Kate’s plea without a bit of a fight.

Like I said before, I enjoyed this week’s episode as an individual exercise.  Would I want to see and episode format like this again and again?  Not necessarily.  Would I be more willing to see an episode like “Weekend at Bobby’s” or “The Man Who Would be King” that relegated the Winchesters to second string at the expense of secondary characters that we know well?  Yes, because that would be a different story that fits more in line with the show that we’re used to.  But I appreciate the fact that Supernatural continues to push the envelope and try new things.   Was this a filler episode (ie. one-off and not related to the overall story)?  Sure.  But that doesn’t mean it wasn’t interesting and enjoyable.

Next week, however, we get back into the Purgatory groove.  Dean heads off to help Benny and we’ll finally see Dean’s brother and Dean’s new vampire BFF meet.  Watch a preview.