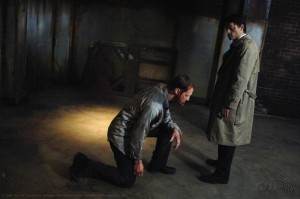 This week on Supernatural, Dean goes Dexter, Sam’s developed a wee addiction, and the Epic Battle Between Heaven and Hell wages on!

Hey, folks! Julia Thorne here, subbing for the Lovely and Talented Kripke Owns Me, who’s experiencing technical difficulties. Send some good technology-karma her way. Let’s get on with it, shall we? (Ah, and for those curious, this week’s title references a phrase of St. Thomas Aquinas’ — the Wiki entry is here if anyone’s interested.)

Then: Lilith is still trying to break the 66 Seals in order to set Lucifer free! Castiel is an Angel of the Lord! Anna is fallen angel who went up in a cloud of sparklies! Alistair is still doing his Marlen Brando impersonation! Uriel’s a specialist! Pamela’s dead! Dean’s still emo! Sam’s doing dirty things with a demon!

Now: We open in media res on a massive car crash, complete with random honking and flashing, on a rain-slick road. Castiel, who is wandering amidst the wreckage, quiets the chaos with a wave of his hand. Our little Angel of the Lord comes across a blond in a white nightgown. The clothing choice is appropriate, as she’s sprawled out on the pavement, having been impaled in the throat by something nasty. “Goodbye sister,” Castiel broods as sirens sound in the distance. It’s the Five-Oh, run for it! Or… flap away. Castiel disappears as the cavalry arrives. One of the officers stares at the nightgowned-corpse and whispers, “The Hell…” as the camera pulls out to reveal big black angel wings charred onto the pavement behind her. It’s preeeettty. (I must admit, my problems with it aside, the production values of this episode are fantastic.)

The Impala streaks down a foggy Wyoming road at midnight and — hey! Sam’s driving. WATCH OUT FOR SEMIS. Apparently, Ruby’s meeting the boys in Cheyenne to give them some intel on Lilith. It’s your opportunity, Dean! Kill her! Dean, however, ignores me and sleepily (or drunkenly? C’mon show — you told me he came back from Hell an alcoholic. Lemme see!) makes it clear that he doesn’t care about Ruby. He’s mostly feeling guilty about Pam dying (stupidly — would you leave a blind chick in a room with your rapidly cooling body and nothing in the form of salt lines or whatever for protection if you knew something nasty was prowling around town? I didn’t think so.) “I’m tired of burying friends, Sam,” Dean says. Wait. Say what? Bobby’s still around… the Winchesters have other friends? I’ve missed a memo. “I’m just gettin’ tired,” Dean admits (Callback to Season 2? Dare I hope?) “Well… get angry,” Sam says matter-o-factly. Yeah, Dean! I’ve had enough of this emo crap to last me several hiatuses. Go lop some demons’ heads off with a pick axe or something.

The boys lug their stuff into this week’s crappy motel room, which demonstrates no fun theme to speak of, to find Castiel and Uriel waiting for them. Despite the fact that the boys just got back from Pam’s funeral (hopefully Dean wasn’t being literal about the burying — salt and burn that sucker, boys!), the angels tell Dean that he’s needed. Dean’s still a little sensitive that Pam died before she got the chance to oogle his ass. He lashes out, grunting, “Maybe you can stop pushing us around like chess pieces for FIVE FREAKING MINUTES.” Way to go, Dean. The chess piece analogy is a good one. While I appreciate Dean bemoaning the Winchesters’ loss of agency this season, it doesn’t change the fact that chess bores me. It probably bores Dean too. Like, if someone announced “Checkmate,” Dean would be more likely to pick up the board and smash it over their head, yelling, “Strategy? This is what I think of your goddamn strategy, douchebag! Now someone get me some pie!” and then… sorry, tangent. Where was I? Oh, yes. When Castiel attempts to ease Dean into helping them, Uriel cuts him off. It seems seven angels (were they Spanish?) were murdered from Castiel’s and Uriel’s garrison.” Sam, who will be acting as my stand-in for much of this episode (except for the whole blood-sucking thing… I’m kinda queasy when it comes to blood), says, “I’m sorry but what do you want us to do about it? I mean, a demon with the juice to ice angels has to be out of our league, right?” I must note that Sam says this with the slightest hint of a smile, indicating that it might not reeeeally be out of their league, but he doesn’t say anything, because then Super!Sammy wouldn’t be able to save the day later, would he? But I’m getting ahead of myself. Uriel indicates that the angels can take care of the demons, but they need Dean’s help to locate the ones responsible. The angels have Alistair, but he won’t talk, so they’ve come to his student, “the most qualified interrogator we’ve got.” Really, Show? I’m sure there’s some dudes from the Inquisition floating around up there. Dean pleads, “No, you can’t ask me to do this, Cas, not this.” Uriel, with an evil glare, responds, “Who said anything about asking?” Flappy flappy! Sam looks around to find himself alone in the motel room. “DAMN IT,” he roars.

Dean reappears at a meat processing plant, where Alistair is strung up in the middle of a dark room on a metal Star of David in a Jesus pose, restrained with iron chains smack dab in the center of a Devil’s Trap. Way to corrupt my concepts of religious iconography, Kripke. Castiel informs Dean that, “He’s bound completely.” Dean, however, is having none of this and is ready to hitch a ride back to Cheyenne. Uriel stops him before he can leave, though, saying, “Angels are dyin, boy.” I still am baffled by his seemingly Southern mannerisms when Castiel and Anna remain very aloof and stiff. It’s an odd choice. “Everybody’s dyin these days,” Dean says, “And hey, I get it, you’re all powerful, you can make me do whatever you want. But you can’t make me do this.” Huh. Dean came back from Hell with a backbone. Castiel recognizes that this is too much to ask, but they have to ask anyway. Dean wants to talk to Castiel alone, so Uriel’s will be seeking “revelation” elsewhere. Dean tells him to get some donuts while he’s out. “I think I’m starting to like you, boy,” Uriel chortles and swoops out. “You guys don’t walk enough. You’re gonna get flabby,” Dean tells Castiel, but he gets no response. That’s okay, Dean. I laughed. Castiel has basically been put on a leash by his superiors because they think he was getting too close to Dean. He was expressing emotions, which are “doorways to doubt” that would impair is judgment. “Well tell Uriel, or whoever, you do not want me doing this, trust me,” Dean says. “Want it? No. But I’ve been told we need it,” Castiel responds. Dean looks into the room where Alistair’s being held and gets choked up, rasping, “You ask me to open that door and walk through it? You will not like what walks back out.” Castiel reassures, “For what it’s worth, I would give anything not to have you do this.” Dean closes his eyes and gulps.

Aaaand then Dean walks through the door. What?? I do not understand why he changed his mind. Where was the turning point in that argument? “No, no! Really! I’m not gonna do this. Nuh uh, no way. End of story… okay, I guess I will. Since you asked nicely.” Extremely bothersome. So Dean wheels a cart full of instruments into the torture chamber as Alistair belts out “Cheek to Cheek” creepily at the top of his lungs. Okay, the actor’s Marlen Brando impersonation was bugging me last week, but I think in this episode, it really works. I just had trouble hearing some of his dialog at times because of the delivery. Dean takes the cover off his cart to reveal his torture instruments and Alistair starts laughing. “I mean — are they serious? They sent you to torture me?” Dean tells him he’s got one chance to reveal who’s killing the angels. Dean, I don’t know what Alistair taught you down there, but you’re supposed to start out with a little bit of intimidation first, aren’t you? Get ’em to fear you, then toss your demands out. Asking nicely isn’t going to get you anywhere with this guy. Alistair smarms, “You think I’ll see all your scary toys and spill my guts?” I see where this is going, Show. Don’t do it! Don’t give into the clichÃ©! “Oh, you’ll spill your guts, one way or another. I just didn’t want to ruin my shoes. Now answer the question,” Dean responds coolly. Nooo! You hit the clichÃ© squarely on the head, and the only thing that remotely stopped me from rolling my eyes was Ackles’ delivery. “Or what? You’ll work me over? But then, maybe, you don’t want to. Maybe you’re aaaaaall scaaaared to” Alistair mocks in a singsong voice. “I’m here, aren’t I?” Dean asks. Jensen Ackles’ throat may need an Emmy for this scene, because it’s doing all the work. “Not entirely. You left part of yourself back in the Pit. Let’s see if we can get the two of you back together again, shall we?” Alistair says. And… I don’t know what he’s referring to. Dean has seemed pretty damn normal thus far this season, despite the fact he’s been to, uh, Hell and back. Yeah, he’s boozin’ a bit, and he’s kinda emo, but I’m not seeing the big deal. He’s still the same hunter he was before he went downstairs. “You’re gonna be disappointed,” Dean says, going for his tools and getting my hopes up that this might be a deliciously painful, bloody mess of a torture scene. “You have not disappointed me so far,” Alistair counters, “C’mon. You gotta want a little payback for everything I did to you, for all the pokes and prods… no? Then how about for all the things I did to your daddy?” Dean looks up, caught off-guard. Oh, Dean, Dean, Dean. You’re doing this all wrong. Let me see if I can simplify it for your pretty, emo little brain: You are supposed to be torturing him. Not the other way around.