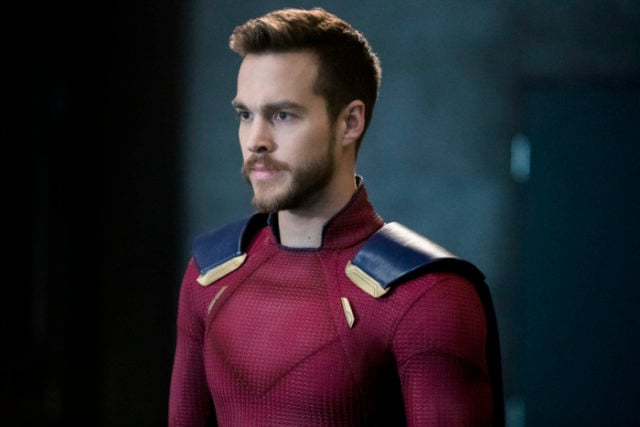 When Supergirl fans point to flaws with the show’s overall superb second season, most are quick to bring up Mon-El’s behavior and how so many of his mistakes, which were the result of his own arrogance and selfishness, were brushed aside as the series’ writers focused more on the romance between him and Kara. While I have always enjoyed Mon-El for the most part (and a great deal of that is due to the charisma that Chris Wood brings to the role), I can still acknowledge that how he was handled throughout Supergirl Season 2 could sometimes be problematic, especially when the creative team spent more time on his character’s journey than Kara’s.

The end result, though, of Mon-El transforming from brash, cocky prince into a more selfless, humble hero-in-training all because of Kara’s influence, was enough for me to forgive the writing issues in Supergirl Season 2. Apparently, though, the show’s producers have not forgotten about the complaints they received last season because this week’s episode, “In Search of Lost Time,” tackles the Kara/Mon-El problem in a major way. The hour has Kara admit that she still has unresolved romantic feelings for her ex-boyfriend, but more importantly, she also recognizes just how troublesome many of Mon-El’s actions during last season were and comes to grips with the fact their romance was not as perfect as she idealized it to be after he left Earth. It’s a crucial life lesson for Kara, one that’s likely a lot more relatable to audience members than the cape training she also goes through during the episode.

Relationships, romantic or otherwise, are hardly ever as flawless as we imagine them to be, and it’s essential for us to understand the problems within them, big or small, if we ever hope to improve them. Just because we discover these issues in a relationship doesn’t mean we care about that particular person any less; in fact, our ability to be open and honest with ourselves and them illustrates a greater sense of security and intimacy than if we were to simply turn a blind eye to it. Now that Kara and Mon-El have both acknowledged the problems of their past, and he has finally, fully apologized for the major role he played in those problems, the two of them can move forward and have a deeper, truer connection than they did previously, whether it’s romantic or strictly platonic. Given that this is a CW superhero show and that Chris Wood is a series regular, all signs point to Kara and Mon-El getting hot and heavy again before Season 3 is over, but now, when they do, it will be as their best selves with no lies, secrets, or repressed emotions holding them back.

As rewarding as Kara and Mon-El’s confrontation ultimately is, it doesn’t happen organically. The catalyst for it is actually M’yrnn’s psychic episode, which causes everyone in the DEO to unleash all of their pent-up anger and aggression. This incident is one of the unintended consequences of M’yrnn’s mental deterioration, and after J’onn tries and fails to protect everyone in the DEO from it himself, he understands that the only solution is to suppress his father’s psychic abilities, robbing him of the one thing that still ties him to his Martian identity: his mind. This storyline presents J’onn with more rich family conflict but with a different spin; instead of telling yet another story about J’onn as a husband and father who lost his wife and children, we see him have to be a son who must now care for his parent as if he is a child. It fulfills the words of Jor-El (another awesome Superman: The Movie reference) that Kara mentions early on in the episode: “The son becomes the father, the father the son.”

Injecting this storyline with even more emotion is the fact that M’yrnn had been robbed of his Green Martian heritage for so long as a White Martian prisoner. Since he has been on Earth with J’onn, he has found a balance between his Martian history and the new pleasures of human life. With his freedom, M’yrnn has rediscovered his connection to his son and reaffirmed his love and devotion to his own culture, a passion that he kept burning inside of him even as he was being tortured for years. That link to his Green Martian nature kept M’yrnn alive while he was held captive, and to take it away from him makes J’onn feel as if he is tearing apart a piece of his father’s soul. How can he snatch away the one thing that kept his father whole during his imprisonment? How can he strip away the one thing that the White Martians could never take away from M’yrnn?

Fortunately, J’onn doesn’t have to forcefully subdue his father. Once M’yrnn realizes what his psychic episodes are doing to the people of the DEO and listens to Kara’s words about having to accept the changes in life and move forward, no matter how difficult it is, he understands the danger of his fragile mental state and willingly agrees to dampen his psychic abilities. It is because of J’onn’s love and compassion that M’yrnn reaches this conclusion; his son has shown him the goodness of humanity and the importance of family, and he realizes that his fear of losing his last connection to his home planet almost cost him everything and everyone he has grown to care for here on his new home of Earth. M’yrnn recognizes that he must let go of the past in order to have a future, and it serves as a powerful metaphor for the impact of change in the real world: sometimes we have to relinquish our old beliefs and practices in order to evolve into stronger, better individuals.

And M’yrnn is not the only person in “In Search of Lost Time” who must accept these new changes. After Lena tests Sam’s DNA and reaches the conclusion that she’s transforming into Reign during her blackouts, she provokes Sam and films her transformation in order to convince her of what’s happening. After spending so much of this season getting to know the real Sam, it’s heartbreaking to watch her come to grips with this alter ego she was unaware of, and Odette Annable’s performance is fantastic throughout the hour, especially as Sam has her breakdown when first watching Lena’s footage and when she tearfully calls Ruby near the end of the episode, telling her that she has to stay in the hospital because what she has is “contagious.”

Furthermore, Sam ordering Lena to keep Ruby away from her to ensure her safety also shows yet again the strength and fortitude of her character; she’s dealt with so much adversity in her life already and has created something pretty wonderful out of the messiness. Battling Reign’s control over her body will certainly be her greatest challenge yet, and even with Lena’s help, I’m not optimistic about Sam’s chances of making it through this whole ordeal in one piece. However, the Supergirl writers have done such a solid job of developing her character throughout these first 15 episodes of Season 3 that I’m willing to follow her journey wherever it takes her, even if the end is as tragic as I’m predicting it will be.

J’onn struggles to deal with M’yrnn’s illness, and Kara finally addresses her past problems with Mon-El in a stellar episode of Supergirl.