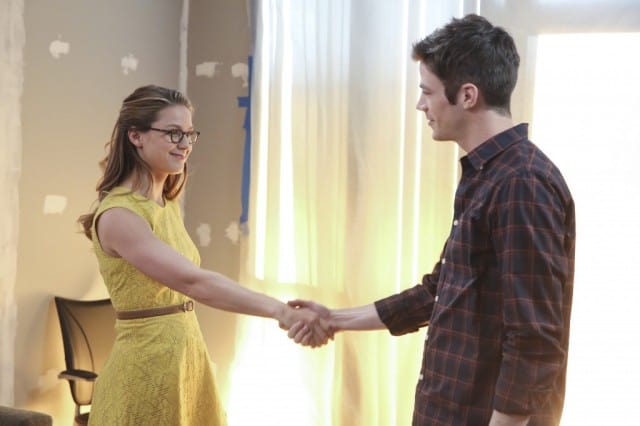 Get ready superhero fans, because your dreams are about to come true. After months of whispers and planning, The CW’s superhero The Flash will make his way to CBS’s Supergirl. In a storyline only a comic book genius like Producer Greg Berlanti and his team could produce, Barry Allen, aka The Flash, will accidentally find himself in National City and require the help of Kara Zor-El, aka Supergirl, to get home. If these clips are any indication, the pairing is pure magic.

Let’s quickly recap what’s going on in the two separate universe, literally. On Supergirl, Kara has spent the year testing her strengths as a superhero in the public eye as she works alongside her sister Alex Danvers and their mentor J’onn J’onzz, a Martian who was masquerading as Hank Henshaw, head of the DEO. Kara is aided in her quest to help the city and protect the world from malicious extra-terrestrials by friends Winn Schott and James Olsen. Recently J’onn’s identity was exposed, so he and Alex went on the run to find her father, while the DEO gained new leadership in James Olsen’s ex-girlfriend Lucy Lane.

On The Flash, scarlet speedster Barry Allen has been a superhero for almost two years now since the night he was struck by lightning after a particle accelerator exploded. He has been working with his team at Star Labs recently to defeat another speedster named Zoom, who they just figured out was their friend Jay Garrick. Zoom has been working in the shadows for months doing everything he can to steal Barry’s speed. Therefore Barry has been training diligently to get faster, and it seems that in his efforts he accidentally crosses universes and finds himself in National City. Check out the clips below as The Flash gets acquainted with Supergirl’s universe.

“Worlds Finest” – Kara gains a new ally when the lightning-fast superhero The Flash (Grant Gustin) suddenly appears from an alternate universe and helps Kara battle Siobhan, aka Silver Banshee, and Livewire in exchange for her help in finding a way to return him home.

Are you excited yet? Tune in next Monday when The Flash comes to Supergirl.