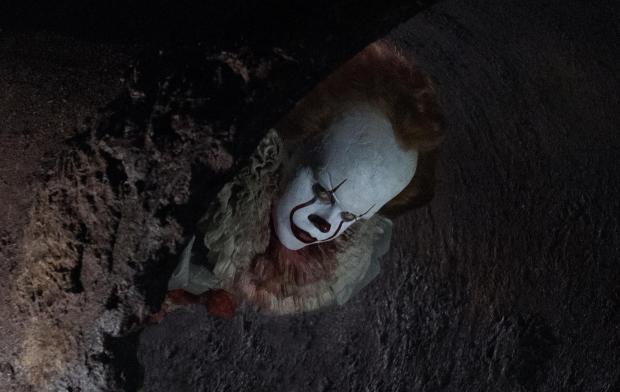 If you’ve read the book and watched the movies then you already know that Pennywise is a disturbing character. But if you can believe it, there is a scene that was cut from the movie that shows the demonic clown as an even more disturbing individual than ever before. I know that’s kind of hard to believe of an ancient creature that feeds on children and enjoys scaring the living hell out of them first so that they taste better, but believe me, if you’ve read the book then you know just how bad IT can get. Do I really need to go into King’s style of ranting that went on between the grown up Beverly Marsh and the clown masquerading as her father?

Pennywise is a creep and a killer and a psychotic monster to be sure, but we only got to scratch the surface in the movie IT. According to several different sources there was  scene in IT that didn’t make the final cut simply because it was too disturbing to place in the theatrical version. Think on that for a moment. People have seen zombies and other creatures literally tearing bodies apart on screen, and it’s more disturbing than that. You can judge for yourself just how bad it is in a second, but if they kept it out of the movie for that reason then it seems like it would be almost heretical or in some way just too graphic for film in any sense.

So as we know IT is an ancient, evil entity that gets its jollies from feeding off of those that it can truly frighten, as this makes the meat of IT’s prey so much sweeter. Before Derry was Derry, when the creature was still dormant, settlers began to colonize the land and make it their home. There’s not much said as to whether they woke the beast up or if it simply sensed their presence and began to rise, but the gist of it is that the first victim of IT was a child that was offered to IT so that the mother could save her own life. That in and of itself is not the most disgusting part, though it is surely disturbing to think that a mother could do such a thing. Just the betrayal of it is enough to make many people clench their gut and try to think of more pleasant things.

But this means that since the first days in which Derry was colonized people have known of IT, and have done nothing. They’ve lived with this monster for generation after generation, and still have done nothing. They have allowed themselves to be deceived, to live in ignorance, and simply claim that the town’s many disasters and missing children have been accidents or some other force at work rather than the creature. Nothing in Derry is the fault of the grown-ups after all, as once they get old enough IT finds it far easier to make them forget.

From that point on it’s the children that suffer, and IT has no trouble taking children, because their fear is pure, and it’s oh so sweet.

Told you it was messed up.