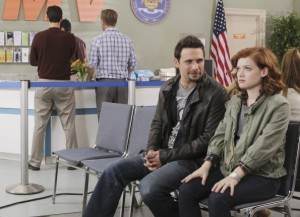 Even though Suburgatory is the story of a father and daughter trying to navigate their way through the culture shock of a new environment, there are times when it can get a bit too insular. George and Tessa have a lot of comedic chemistry together and while seeing them dryly riff with one another can be a lot of fun, for Suburgatory to be able to stand up as a series, their worlds need to be expanded. Not exponentially and not at the detriment of their relationship, but now that the two have been in Chatswin is a bit behind them, you want to see the Altmans dip their toe in the social scene of the suburbs.

In “Driving Miss Dalia”, Tessa spent a lot of time away from George, having been hired by Dalia to drive her around the neighborhood of Scott Strauss, Dalia’s crush. While you have to wonder why Dalia doesn’t just cyber stalk like the rest of us, it made for quite a character showcase, as this is the most time we’ve spent with Chatswin High’s Queen Bee since she apathetically sauntered into our lives this past fall. It was well worth the wait, though, as Tessa and Dalia have always had a nice rapport that has produced some of Suburgatory‘s best moments and tonight was no exception. I don’t need Tessa to be best friends and confide in every ancillary character, but aside from George and Lisa, she hasn’t interacted a whole lot with anybody else; I can understand slowly intergrating Tessa into her new life, considering how apprehensive she still is about the ‘burbs, but it felt like time to put her and another character in a plot and locking the door, so to speak, to see what happens. 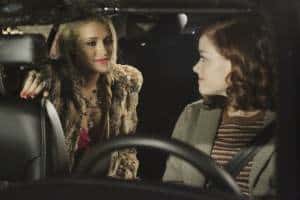 Even though some may object to the whole “teenage girls fighting over a boy” plot, with hottie humanitarian Scott being in the middle, I think it’s a good way to give Tessa some roots in Chatswin. She has friends in Lisa, Dallas, and Malik, so she’s making it in a platonic sense, but giving her a love interest ties her to the person she has the most chemistry with (Dalia) and could help her let down her guard a bit. For most of the run of Suburgatory, Tessa has been cynical and snarky, a guarded soul content on the “it’s me vs. them” dynamic that she came into town with. It’s been softened thanks to the aforementioned friendships, but it could be softened even more if she sees romantic potential in one of Chatswin’s own.

Of course, Tessa will never fully embrace her new town, but once she builds her own world away from George, it may not seem so bad.

Speaking of George, he had his own worries this week when his guest membership at the local country club ran out and Noah lagged around on getting him approved for his own account. I’ve not always been keen on the George plots on Suburgatory, as they can feel disconnected, but tonight’s worked well, partially due to it thematically tying in to what Tessa was going through. George had to question his friendship with Noah and whether he even wanted to be accepted by the Chatswin elite, a type of self-assessment that we don’t often get to see from parents; it underscored how social dynamics from our youth continue well into adulthood and how George and Tessa have had similar experiences, on different scales. George is just as much of an outsider as Tessa is, despite his recent lothario status, and it’s a plot like this that brings that up as a reminder. Though we’ve already had a George/Noah fight in a previous episode, any Alan Tudyk is welcome in my book, especially if it involves (hilarious) naked wrestling in a sauna and symbolic adoption at the end of the episode.

Plus, like Tessa, George needs connections outside of his family and revisiting his frenemy Noah was a fun way to do that. I mean, he has his, er, “thing” with Dallas and a fear/respect thing with Sheila, but after that, he needs more potential avenues for subplots.

“Driving Miss Dalia” was a really fun way for Suburgatory to come back after hiatus. Tessa and George got to live in the world of Chatswin a little more and we got a chance to indulge in more Dalia, who loves Lil Wayne and apparently lives in a Pepto Bismol bottle. There weren’t even any tonal problems this time around, with the over-the-top elements being balanced by the subplots ultimately being grounded in acceptance and the need for human connection. Suburgatory‘s on a bit of a hot streak lately, three pretty good episodes in a row and counting, and if we can flesh out the supporting cast a bit more through more (mis)adventures of Tessa and George creating separate lives in the ‘burbs, I have a feeling that hot streak could become more permanent.

Thoughts, Quotes, & Observations:
-“No, no, God, no. I’m rounding down from six.”
-“Did you get whiplash watching me surpass you in every way?”
-Dalia on Tessa refusing $20 to drive her around: “Fine, I’ll double it. $50.”
-“Tessa, you just banged Scott Strauss.”
-“I own Marty. This is my Marty!”
-“Zambia, is that, like, an antidepressant? Is that the one that gives you diarrhea?”
-“Once you’ve been dinged, you can’t be undung.”
-“I don’t let Dalia have hard liquor on school nights.”
-In the pantheon of Suburgatory episodes, I’d put this at or near the pilot and “Thanksgiving”, the show’s two best installments.
-If you missed my article full of Suburgatory spoilers, you can check it out here.
-Scott’s cougar joke seemed like a shout out to Cougar Town. Love.
-The rap beat played under Dalia’s “d-u-m” rant was perfection.
-Fred’s back! And naked. Jocelyn’s back! And awesomely weird.
-Another animal metaphor at the beginning of the episode, which recaptured some energy from the first few episodes. This time, we’re talking coyotes and rabbits.
-The guy who played Scott Strauss reminded me of a younger Ed Westwick. Anybody else?
-TV Guide has a cute piece on Jeremy Sisto where he talks about making the transition to comedy and how his real life impacts his acting on Suburgatory.
-Next week on Suburgatory: Cougar Town’s Dan Byrd guest stars as a new student at Chatswin High (that Lisa becomes infatuated with) and Mr. Wolfe reveals something scandalous to the student body.