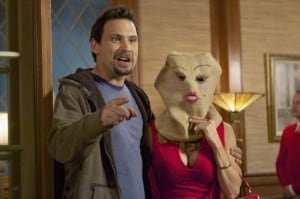 Although she doesn’t particularly care for the holiday itself, Tessa is happy to have a Valentine this year in Ryan, who gives her a handmade card and invites her to go to a party at Cody’s. Granted, he’ll have to wear a shirt that says “Cody’s Mom is a MILF” on it, but it should be the type of non-mushy activity that cynical Tessa should revel in. Only, she wants to go see well-reviewed art house movie Sea of Anguish down at the local theater. With the promise of popcorn and candy, Ryan agrees to go with her. His reaction to the movie, though, surprises Tessa and makes her fearful for the future.

That’s because he loved the movie, which featured a monkey running through an art gallery, bowing to a statue of a horse, a child staring at a fish for 5 minutes, and a ghost possessing an eel, while Tessa hated it and didn’t derive any of the meaning from it that he did. When she offers to go to the party anyway, he decides that he needs to take a walk; Tessa worries that their disagreement and his reaction to it could mean trouble up ahead for them, but Dallas reassures her that it’s a good thing. It means their relationship is progressing and although they may be out of the honeymoon period, they’re at a time that could be the beginning of something real. As with anything real, everything won’t be hunky dory all the time, so she needed to go find her man and make up.

Tessa finds Ryan at the party and they do indeed make up.

Dallas and the Blowfish
George has made reservations for an 18-course holiday dinner from renowned Chef Julio Proust, but Dallas ends up having to cancel. In an effort to look better for her boyfriend, she had blowtox, a cosmetic surgery where venom from the Japanese blowfish gets injected into your body, and things…didn’t turn out well. Dalia compares her mother’s face to a man who got his face eaten off by an alligator, mated with the elephant man,  and produced an old baby with an infection, so it’s all shadows and bon bons this Valentine’s for Dallas.

She cancels on George by telling him that Dalia needed her in for the night, although he ends up going to the restaurant and staying for the $600 meal himself due to a snippy comment made by the waiter. By the time the 15th course comes around, George is a little ill and luckily, Dallas (her head in a burlap sack with a cute face drawn on it) shows up to take him home. There he tells her that she doesn’t need any surgery and that she’s beautiful to him, causing her to reveal the severely distorted, swollen face that resulted from the procedure.

Everybody Tango!
Sheila’s mother Gam Gam comes to visit a day early, delighting Fred and irritating her daughter beyond belief. Gam is constantly overstepping her bounds with Fred, doing everything from bringing him a rib-eye in her purse to dancing the tango with him in the living room and massaging his back when he gets a cramp. Sheila then finally gets what Lisa had been complaining about regarding her actions with Malik; she didn’t see it before, but she had been cutting in on them the same way Gam Gam does with her and Fred, so she decides to try to get Malik and Lisa back together. Malik had been attempting to win his ex over through serenading her both at home and school, but Lisa shut him down each time, making him game for a late night scheme with Sheila.

The two decide to have a fake argument when he shows up “unannounced” one day; it allows Lisa to feel like Malik’s taking her side for once when he stands up to Sheila and as a result, they get back together.

Additional thoughts and observations:
-“Mommy, you’re really disgusting.”
-“I’m afraid I’m in no position to suck anything tonight, George.”
-“I feel like walking the Earth.”
-“It was an honor to watch you lamb it.”
-I’m glad to see Dallas and Tessa sharing a moment for what feels like the first time in a long time. They were one of the cornerstones of season one and with the adults and teenagers being separated this season, they haven’t had a chance to connect.
-I’d like someone to make a supercut of every lengthy Dalia monologue. C’mon, Youtube.
-I don’t know why this wasn’t included in the episode, but it’s a crime on par with treason.
-I liked the Ryan/Tessa plot, if only for the fact that they didn’t make him the one that didn’t get it. It played on Tessa’s personal insecurities, in addition to her worries about being with Ryan, which I thought was smart.
-Yay Lisa and Malik! They’ve not been getting much screen time alone, so here’s hoping their newfound coupledom can make them a bigger part of the show again.
-Next week on Suburgatory: Tessa gives relationship advice to everyone, regardless of if they asked for it or not, while George and Dallas coach a T-Ball team.