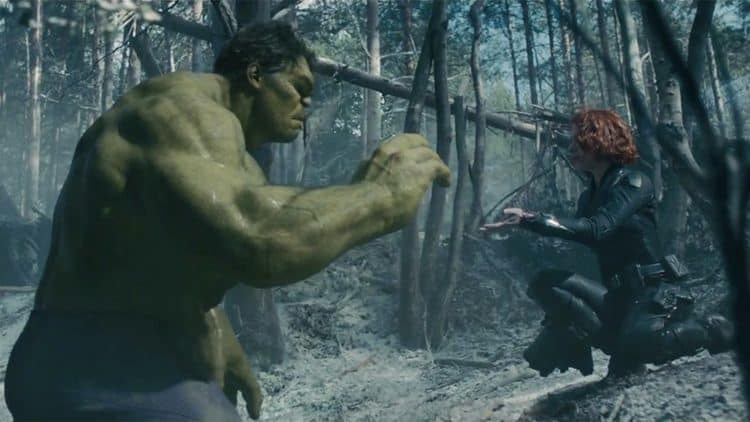 It’s hard to think of anyone being able to calm the Hulk down without first going a few rounds with him, but the Black Widow showed that it was possible in Avengers: Age of Ultron. Unfortunately this was kind of an odd relationship that was formed between the two of them that a lot of people simply didn’t get and some thought was really, REALLY strange since they might have read too much into it. Natasha and Bruce are about as different as you can get to be honest no matter that they both have their secrets and their reason for being angry at others from their past. But for all that, Black Widow and the Hulk are opposites that don’t seem like they should be able to attract. And yet in the movie it’s been shown that they are in fact somehow compatible and that the Hulk responds to her in a kindly sort of way.

Here are a few things you might not realize about this relationship.

10. They were never that close in the comics.

In the comics they had almost no contact outside of the battles they shared and were never romantically linked at all. At one point Natasha was hooked up with Tony Stark until it came down to the fact that she’d betrayed him, which Tony countered by smashing a bottle over her head.

9. They’re thought to be kindred spirits.

Both characters have come from hard and very regretful pasts. There are many differences of course but Black Widow was trained to be a weapon whereas Bruce Banner was sought after by the US military to be used as a weapon. They both have harmful pasts that they’ve tried to forget or run from.

8. The line that Black Widow uses to calm the Hulk is a reference.

The line “the sun’s getting real low” is taken from a Bible verse that speaks about not letting the sun go down on your anger. In other words don’t go to bed angry, or some other rendition of this. It’s how the team has figured out how to get through to the man inside the Hulk so that he can regain control.

7. Mark Ruffalo has explained their connection.

It’s odd to think about but Natasha has a much stronger sense of character than Banner does and as a result she is the only one that’s able to calm him down. As you might have seen in Thor: Ragnarok, the god of thunder attempted to use the same signature line to calm the Hulk down, but it didn’t work quite as well.

6. There seems to be something to the relationship between the characters.

The confidence of Natasha is definitely a foil to the shy and stuttering nature of Bruce Banner since they are complete opposites when it comes to how brave they are and how they deal with others. In an ideal world they might even be a complimentary pair given that she can calm him down and the Hulk can protect her from just about anything.

5. At this point it seems to be over, whatever it was.

Given that the Hulk disappeared and lost track of time on Sakaar, it would argue that Natasha had finally found a way to move on. It’s unknown if Captain America was the one that helped her with this but there are plenty of theories that seem to indicate one way or another that she did in fact move on from the idea of a relationship.

4. The on screen reunion was actually kind of emotional for the actors.

Given that it came on so suddenly and was built up beyond what anyone would think of as possible it was in fact a bit emotional to realize that they were going to be sharing the same space again and be around each other in the same capacity.

3. The cartoon flips the script a bit more.

The cartoon allows both characters more interaction with each other but instead of exploring any hidden desires keeps things as platonic as they could possibly be since Natasha and Banner don’t really see each other as anything more than teammates.

2. It seems like the pairing was kind of unpopular with the fans.

To be fair, some people loved it. Other people were scratching their heads however as up until Clint’s little surprise that he had a family a lot of folks thought that he and Natasha could have been a couple that would work extremely well. Of course the producers and director had a much different opinion, as we got a very different movie out of it.

1. Scarlett Johannson had a funny response to the Hulk’s goodbye scene.

The “fat man in a little car” crack that she uttered was something that she couldn’t let go of once she said it in response to the Hulk leaving in the Quinjet, though to many fans it was kind of a sad parting.

Any way you spin it, this relationship was bound to appear a little strange.