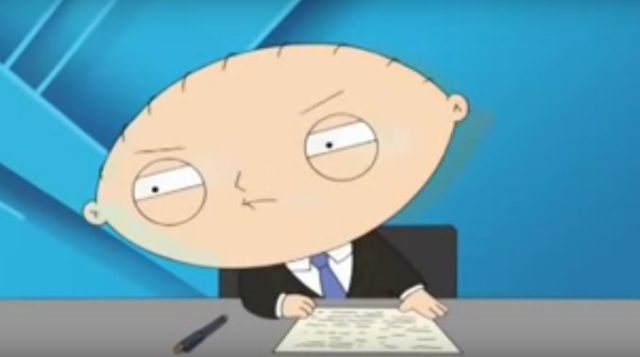 Given all the Bill O’Reilly talk of the last week (particularly last 48 hours), his insane rant from the 90s on Inside Edition has taken on new life.   Many of you have seen it.  It’s O’Reilly caught on film during a non-air moment where he’s speaking to the guy behind the camera.  He goes absolutely ballistic after not really being sure what “to play us out” means.   O’Reilly goes into a series of expletives and the look on his face is priceless.  The guy just couldn’t contain himself.

What you may not have seen is Family Guy doing a spoof on this very clip.   It was a couple of years ago and Stewie takes center stage to have a little freak out of his own.  Now it’s more appropriate than ever.   I couldn’t care less what happens to Bill O’Reilly after all the dust settles from his firing and lawsuits.   But I will say one positive in all this is that it gave me the excuse to post a solid Stewie clip.  Not that you need good excuses to to that but it worked out well here.

Check out Family Guy’s “We’ll do it live” below: