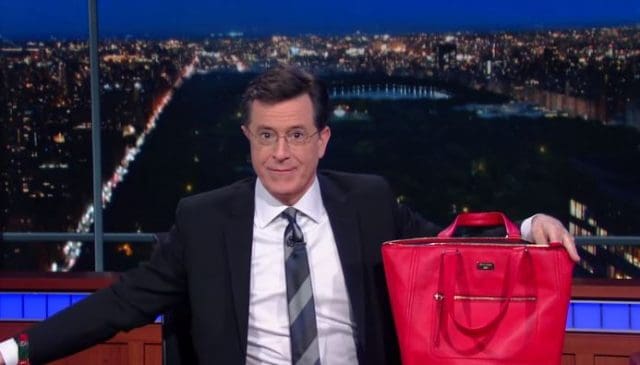 After Hillary Clinton mentioned during a recent interview with Power 105.1’s The Breakfast Club that she carries around a bottle of hot sauce with her all the time, people have been poking fun at the Democratic presidential candidate, saying that she just made the comment to appeal to African-American voters. However, Stephen Colbert was not one of those people who laughed at Clinton’s remarks. Instead, he tried to prove that Clinton was telling the truth by going through “her purse” last night on The Late Show.

So did Colbert find hot sauce in Hillary Clinton’s purse? Yes, he did, but the other items he found might be even more interesting. According to Colbert, Clinton has something for every voting demographic, from a “brimming bowl of queso” to appeal to Hispanic voters to even a Bernie Sanders bumper sticker to get votes from “18- to 34-year-old white male college graduates.”

See everything that Stephen Colbert found in Hillary Clinton’s purse in the video below:

But Stephen Colbert didn’t only discuss politics last night on The Late Show. He also talked about some entertainment news, specifically Sony’s recently announced Emjoi Movie, which inspired him to try to remake all famous movies by simply using emojis.

Watch Stephen Colbert use emojis to explain even more movies in the video below: