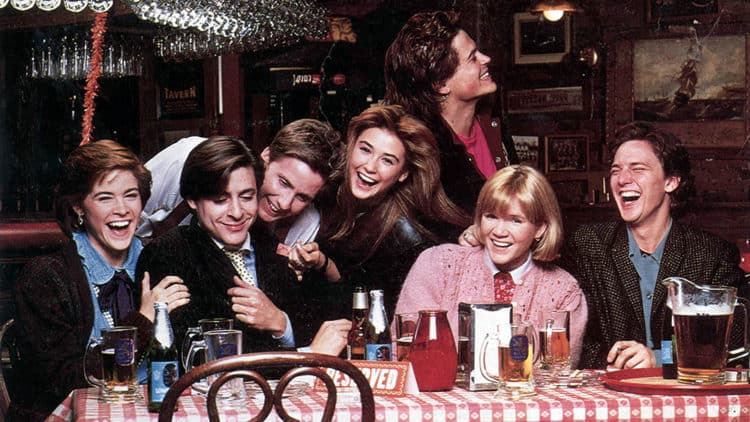 It was bound to happen eventually, right? St. Elmo’s Fire is one of those 80s movies that didn’t seem to get a lot of attention since it got drowned out by other movies of the time and almost forgotten, but those that remember the movie no doubt recall that it had several members of the notorious Brat Pack as its main stars. From Ally Sheedy to Judd Nelson, Emilio Estevez, Demi Moore, Andrew McCarthy and Rob Lowe, this movie had a bunch of future greats that kind of fizzled here and there in their careers after this era but have never been fully forgotten. In truth it’s not hard to think of why someone would believe that this movie could make a decent series since it would almost be like a modern-day Friends given that more than enough people to make up the cast and there’s always room for added guests to just drop in. Plus the whole idea of it is that a bunch of friends from college are now trying to deal with the life that comes after graduation. Mike Jones of ScreenRant makes it sound as though this would be a great idea, and to be perfectly honest I don’t disagree. I don’t fully agree, but I can’t raise any serious issues as to why it shouldn’t happen either.

For those of us that have been there we know what it’s like, you graduate, try to move on, and in some ways it’s easy to be successful, but in others it’s hard to let go of what you had when you were younger and thought you had the world by the tail. Quite honestly a lot of people thought they were hot stuff in college only to realize that once they got out into the world they weren’t quite as ready as they’d thought. In a big way this could be the next comedy/drama that could become something big for people to rally around and really get into if whoever’s doing it would play close to the source material and take it from there. Stories like this tend to be a great basis for sitcoms that end up lasting multiple seasons, and there’s enough there to use in this movie to make a pretty decent show. Obviously it needs new actors since each one of the individuals that made the movie so great in the first place are in their 50s if not 60s by now. But how great would it be if they made eventual cameos now and then? It seems the only real challenge would be getting Emilio Estevez to agree to such a thing since he hasn’t really stepped in front of the camera that much in recent years.

Getting the gang back together just for a brief cameo would be great though unless the creators were thinking of something else and could possibly convince any of the old cast to stick around. The Brat Pack might be ancient history at this time but it would be nice to see at least a few of them show up if only to appease the older fans. So far it doesn’t sound as though the series is really going to be that much different than the movie, but there’s word on when it will start just yet. It’s a safe bet that the cast will be, hopefully, made up of individuals that will be able to pay a good deal of respect to the original movie and continue it in a way that’s likely going to be updated but will still be easy to recognize. Thus far when 80s movies have been revived in any way it’s been a hit or miss kind of situation with a lot of attempts sailing back for simple, maddening reasons such as not following the source material and not bothering to really pay attention to the original movie in the first place. The idea of something usually becomes the basis for how movies are made and remade these days without really taking into account the content that people want to see. Hopefully that won’t be the case here but until we get to see the show we aren’t going to know.

One thing is for certain, it’s kind of a hope that this won’t be a trend since as great as this could be, and it can be if the director and the studio takes enough care to make it so, St. Elmo’s Fire is still a very respected 80s movie that a lot of us still care about. But it’s hopeful that the idea won’t extend to other movies featuring members of the Brat Pack such as The Breakfast Club, Pretty in Pink, or heaven forbid, Sixteen Candles. It’s not the worst idea in the world, but some things kind of need to be left as they are.