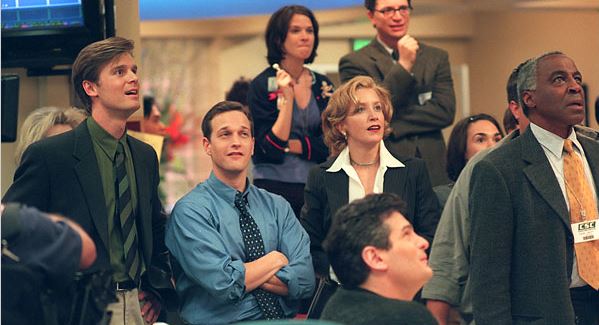 When The Newsroom‘s final season premiered last month, Aaron Sorkin announced that it would be his last foray into television, ending a much-lauded, often unlucky run on the small screen (in favor of a much more lucrative, award-filled career as playwright and screenwriter). Of course, that announcement brought up the ages-old debate of which Aaron Sorkin show was better – The West Wing or Sports Night (neither The Newsroom or the hot, entertaining mess that was Studio 60 on the Sunset Strip can even begin to enter the discussion here); and for me, the answer is always Sports Night.

Sure, there’s no denying The West Wing‘s cultural influence, not to mention the bevy of talented actors that passed through its fictional version of 1600 Pennsylvania Avenue through its seven season-season run (the first four of which were under the pen of Sorkin, who is credited with writing 85 of the show’s 88 episodes to that point). It was a show that embraced Sorkin’s idealistic sensibilities and hope for a better America wholeheartedly, an optimism rarely found in the world of network dramas.

However, I still contend that Sports Night is the superior show: contained to two seasons, it only contains the very best of Sorkin’s potential ideas for the show, avoiding the unnecessary padding of characters and story lines shows often see the longer they run on TV. Plus, being removed from the political realm of The West Wing (and later, The Newsroom) makes Sorkin’s one-sided political arguments a little more well-rounded, placing them in the abstract through the mouth of Dan Rydell, where they can be a little more removed from the world Sorkin wishes to reflect on. Setting up his arguments on certain issues through the office of  the president or a modern news program can often be a challenge for Sorkin, often leading to scenes where real-world events become his soapbox to explain how things “used to be” (when blue-collar America reigned, and women often had careers to make men greater, as Amy Schumer noted in her fantastic “The Foodroom” sketch). 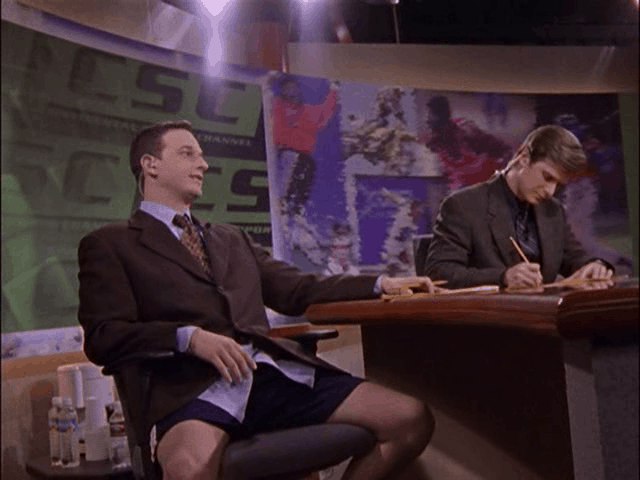 On Sports Night, Sorkin could deliver some of his political thoughts in the much-lighter comedic atmosphere of Sports Night, which in turn allowed him to focus on other elements of character, and not this overwhelming sense of responsibility to educate us on how he thought things should be. Sports Night had its preachy moments, sure, but outside of the show’s pilot and a few “modern”-themed episodes (like a two-parter where Dana’s brother gets suspended for steroid use), most of Sports Night‘s material was dedicated to its characters, the backdrop of the stressful world of capturing the 18-49 male demographic only a catalyst for fantastic character material.

Dana’s professional struggles in season two, Casey’s emotional journey in the show’s pilot, Dan’s therapy sessions with Rebecca… with a much smaller scale (and world), Sports Night is able to showcase Sorkin’s mastery of character, his ability to deliver emotionally resonant stories, rather than focus on poignant reflections on society, where his passions became… well, too passionate. And everyone benefited from this shift in tone: none more than Dana, who doesn’t suffer from Sorkin Leading Lady Syndrome as badly as other characters have – sure, she stinks with technology and often can’t balance her personal and professional lives… but her influence in the office and on other characters above and beloow her on the totem pole is impressive, not to mention how well she functions in season two when the romantic component between her and Casey in season two (finally… man, that was awful).

Although it only lasted 45 episodes, I’d argue that Sports Night remains Aaron Sorkin’s greatest contribution to television, a smart, endlessly intelligent comedy that features the best of Sorkin’s bad habits – and some of the best dialogue he’s ever written, probably the show’s single most impressive accomplishment (plus, it’s got one of the best guest stars of all time with William H. Macy’s ratings fixer Sam Donovan). Sure, The West Wing won more awards and had a much larger influence on our culture… but when it comes to being a great television show, Sports Night was a lot closer than one might think – and in my humble opinion, remains Sorkin’s greatest creation.