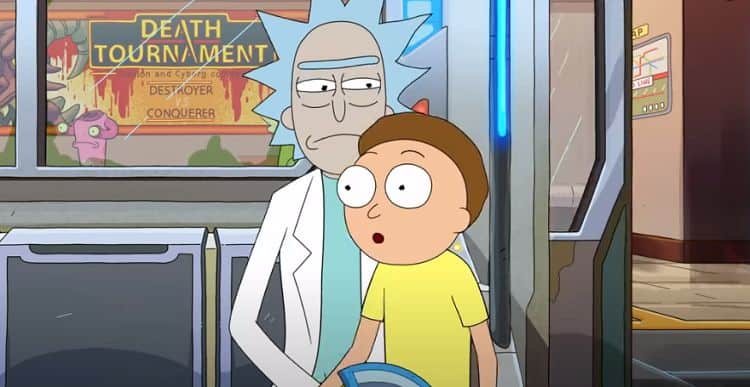 Adult Swim has a wild new show created by Justin Roiland and Dan Harmon debuting on December 2nd at 10:30 p.m called Rick and Morty. It is about a man named Rick, who we can safely call a bit of an eccentric old man with a dash of mad scientist thrown in, coming back home to live with his daughter Beth and her family. Beth, played by Roseanne and Scrubs alum Sarah Chalke, is married to Jerry, voiced by SNL alum Chris Parnell. They have a son named Morty (voiced by the show’s creator. Justin Roiland, who also voices Rick) and a daughter named Summer (voiced by Spencer Grammer, Kelsey’s oldest daughter). The show mainly involves Rick involving Morty in on some insane adventures where no man has gone before. Seriously. They go to different dimensions, and that is just the tip of the iceberg. This is an Adult Swim show, so half the places they go, we can’t even mention here. But the journey is insane and so funny it’s side splitting.

We got Sarah Chalke and Chris Parnell on the phone, and I got to ask them some questions about what it is like to work on Rick and Morty.

What do you guys consider the best aspects of working on an animated show?

Chris: Just the fact that it is so much more relaxed. You can come to work in your sweat pants (my favorite part about writing) and it is a much more casual experience, but you get the freedom to play around with your characters and mannerisms a bit, and that can be fun, too.

Sarah: It’s just so much fun. You get to try one line, so many different ways to see what works, whereas you have the luxury of time to do that on a set, so it’s very freeing to work like that. I also love the art style on this show. It is incredible, to get to see it from the beginning all the way to the finished product is really fun.

@Chris Parnell. I was wondering, I know the show is early on, but do you guys get any input on your characters?

Chris: For me, it comes down to way I play it. Justin (Rioland, creator) used to “direct” the episodes and my character and what I do more. But after we had done a few episodes, now he sits back and waits to see what I would do for a few takes. If I miss it, I take his input, but what is great is, if I really hit it, sometimes he likes my way better so in that sense, yes.

Over the past year, it seems Dan Harmon has gotten quite a reputation, which some see as fair and some see as unfair. Some say he is amazing to work with, some say it is tough. So what has it been like to work with Dan Harmon, who I know helps write and helped create the series?

Sarah: I worked on a show called The BU for Channal 101 with Dan, but we had only met each other in passing. He’s amazing to work with. He is unbelievably creative and so talented and such a great writer. But him and Justin Roiland working on this together? It is unbelievable the world they’ve created.The juxtaposition of the very real couple issues that I and Chris go through on the show, paired up with the unreal worlds Rick and Morty face . I love it, and just think it’s so smart and funny. Have had an absolute blast so far.

Chris: I agree. My experience with Dan Harmon  has just been great because he’s just really fun and really funny . He’s a nice guy and a good director and it has all been, honestly, delightful.

Rick and Morty has some undeniably Adult Swim moments. Meaning the show tends to be quite irreverent at times, but also touches on some darker, more mature themes (although in very comic ways). Was that a fun dynamic for either of you two play off of? Did you feel like you had more of a leash to get away with stuff you might not otherwise be allowed to on television?

Sarah: Totally! You get to use different language you wouldn’t normally get to use. You can throw in your character burping if you feel like it. There’s no limits to it.

Chris: It’s a lot less censored, but the whole show is definitely morally ambiguous.  It’s not out there to present good life lessons to children. It’s adult entertainment, and we can get away with more for that reason.

If you could go back in time and be the voice actor for ANY Disney character or any cartoon character throughout history, who would you choose?

Sarah: Wow, that is a great question! Have never been asked that! So ANY character?

Sarah: ARIEL! (Yes, I am using caps, she was very passionate and quick about her answer) I was a huge fan of The Little Mermaid growing up, but I also wish I could sing. I went into acting because I wanted to be in Les Miserable which was not in the cards. I can’t sing, I am pretty tone deaf. This was made clear in grade five when I was singing Christmas carols and the teacher asked me and my sister if we could just “mouth the words” for this performance. So really, being Ariel would have been one of my dreams.

Chris: For me, I would have to say Mulan. I always related to very strong woman.

Remy: I think you would have done a smashing job, quite frankly.

At this point, Sarah Chalke started singing the song In Harmony from The Little Mermaid to me. No, I am not kidding. She went on for about eight 4 bars, and I let her know it was pretty much the best thing ever. I wasn’t lying.

At this point, we all started talking Disney and got a little sidetracked. The long and the short is, both Sarah Chalke and Chris Parnell are genuinely excited to be on board the proverbial (and as you will see, sometimes literal) spaceship that is Rick and Morty. Trust us, you will want to tune in December first just to how over-the-top and non-stop fun Rick and Morty is. A show quite unlike any you have seen before, and we mean that in the best way possible.