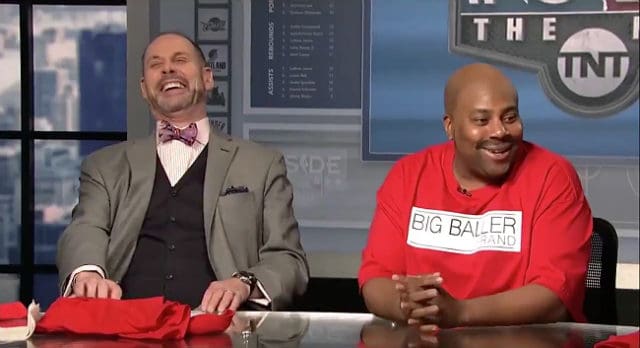 You know a person is getting the business when someone like Kenan Thompson from SNL goes on Inside the NBA and spoofs them. If you’ve watched anything featuring LaVar Ball then you know by now that the man kind of leaves himself open for a lot of spoofing simply by the way he acts and the braggadocio that he uses on a regular basis. The guy simply doesn’t seem to know how to turn it off at times and comes across as a little crass when in truth his success has more to do with his sons than anything else. He’s not the worst human being in the world by far, but he’s got some character flaws that he either refuses to see or puts on hold once he comes onscreen.

Being full of himself is just one of them.

Thompson is over the top of course when he walks in but that’s to be expected since LaVar Ball is the kind of guy that wants you to know how great he is and how great everything he does is. Basically everything about him is just great and he wants you to know it loud and proud. Of course it’s easy enough to just change the channel and get away from it, but his voice does tend to reverberate every so often, kind of like a ringing you can’t get rid of for a little bit.

Anything he talks about, if it has to do with him or his sons, is perfect and is just the way it should be. There’s almost nothing you can tell this guy about himself or about his sons that won’t have him insisting that they’re all superior to anyone else. It’s great to take pride in one’s self and family, but there’s kind of a limit as to how much people can stand.

LaVar has a "special treat" for the TNT crew @nbcsnl meets #InsidetheNBA pic.twitter.com/BRhBPVKkr9

The Big Baller Brand might be a popular brand throughout the world, or at least throughout whatever regions it’s being sold in, but really and truly it’s not much more than a way for LaVar to make more money than he’s already done, which is enough to have a mansion with an elevator in it. There’s nothing wrong with him making money, but something tells me that his stuff is way overpriced.

One thing you can say is that Lonzo Ball is definitely a good player, but unless this was just a bad game he might need to work on his defense. His shooting skills are great, but he needs to be able to work both sides of the ball. Perhaps that was just a single game that he got schooled, but I still see the real LaVar saying something along the same lines of what Kenan Thompson is saying here, that Lonzo getting scored on would just be a stroke of luck by the other player.

"We don't do what we don't want to do." pic.twitter.com/w5jXS0RBof

Despite being over the top when it comes to playing the part of LaVar Ball, Kenan Thompson still hit the mark pretty true it seems since he said a lot of things that the real Ball probably would have said.