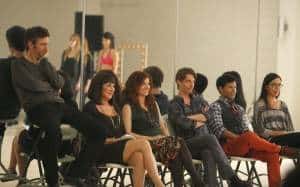 This week’s Smash had the big reveal: who was chosen to play Marilyn? Both Ivy and Karen were put through the ringer in another round of callbacks. Eileen, Derek, Tom and Julia kept going back and forth, debating which girl to select. While Tom kept pushing for Ivy – saying she had the experience and the right attitude for the part – Derek was learning more towards Karen. But he admitted that they needed more information in order to make their final decision. More specifically, they needed to see if Karen could dance.

Derek pushed Karen hard through the routine for an original song from the musical: “The 20th Century Fox Mambo”. Constant rehearsals caused her to miss a dinner date with Dev and it’s clear that her continued involvement in the theater might become a point of contention between them. Karen had a lot of trouble learning the routine, but she did a great job in the end. Meanwhile, Derek also called in Ivy to do some scene work and the pair ended up sleeping together.

In the end, the part of Marilyn went to….Ivy. Tom was thrilled that the others agreed with his choice and went to deliver the good news to Ivy personally.

Eileen’s husband Jerry has also heard of the Marilyn musical and cornered his soon-to-be-ex-wife at a restaurant, asking her what the show was about. When she refused to provide him with details he tried to unnerve her, saying no one would invest in the play. Later, he also approached Derek, picking up his option to direct My Fair Lady. Derek admitted this to Eileen, who thought he was going to give up the Marilyn musical. But he surprised her by saying he was sticking with her.

Meanwhile, the Smash subplot concerning the Julia-Frank adoption story continued. When they learned that it could take up to two years to adopt a child from China, Frank wanted to throw in the towel, saying that he didn’t want to be too old to raise their new daughter. But Julia was determined to see it through and Frank eventually came around, joining her at a support group meeting for adoptive parents.

A new episode of Smash will be airing on February 20 and the search for an actor to play the role of Joe DiMaggio begins. Meanwhile, it looks like Karen will be placed in the ensemble. But will Ivy be able to hang on to the role throughout the 15 episode season? We’ll just have to wait and see.