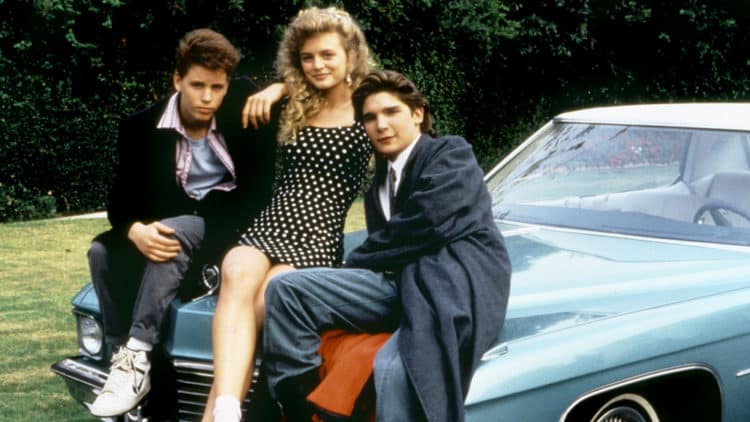 Back in the day there were movies that one couldn’t help but laugh at, be thrilled by, and want to make a part of their life since the actors and the situations they got into were so insane and out of control that they offered a pleasant release from the lives we knew. License to Drive was not the kind of movie that you’d want a very impressionable kid watching but at the same time it was a part of a lot of our childhood fantasies since it showed that someone could actually get ahead if they decided to go for it and beg for forgiveness instead of asking for permission. Corey Haim and Corey Feldman were at the height of their fame at this point and while no one knew about the troubles they were experiencing behind the scenes, their on-screen chemistry was near perfect. Fortunately, and unfortunately at the same time, the two didn’t end up falling apart until later on when the struggles they’d had to deal with simply became too much and they ended up turning on each other for a while.

In regards to the movie though they were absolute comedy gold and were so well-matched that there was no stopping them and whatever was happening behind the scenes hadn’t been revealed yet. The movie is all about teenage rebellion, coming of age, and just having fun obviously and it’s something a lot of us have thought about doing when we were younger and some of us might have even done. Of course the dire implications of behaving in such a way are often a lot different in real life than they are in the movies since you can imagine that the joyride that Les took throughout the city and the moments in which he and his buddies almost got themselves killed would be noticed by the police a time or two since this seems to be the way things happen now and again when there’s not a camera rolling. But in the movies it’s great since we can laugh and enjoy the hilarity of the moment, the awkwardness of a date getting blind, stinking drunk and then passing out, and of course the uncertain but necessary measure of putting her in the trunk while Les and his friends took a trip around town. Yeah, you can imagine that people who love to criticize 80s movies had a field day with this one too.

What needs to be understood however is that back in the day this was a part of our culture that was embraced and absolutely loved since it was the wild and crazy days of our youth and they were meant to be enjoyed in one way or another. Of course a lot of us didn’t go out and take our grandfather’s car and spend the evening flouting responsibility in order to impress a young woman….well, some of us didn’t perhaps. But all the same we enjoyed the fact that someone like Les, with no driver’s license and no real prospects, could snag a date with someone like Mercedes, played by a very young Heather Graham, and paint the town red so to speak. Plus, back in those days it seemed as though Corey Feldman always played characters that were bound to be a bad influence on someone as he was the mouthy, wise-cracking individual that never seemed to shut up, hence his nickname of Mouth in The Goonies, and would always convince his friends to do something that was less than safe but bound to be fun…in theory.

You can’t really say that Corey Haim was the complete innocent in any given movie since he caused his fair share of trouble, but usually in a much more low-key manner. He was more or less the follower to Feldman’s madness and it would seem that this translated over to real life as well since the two were close friends for a long time, but the trouble that they saw in their lives tended to split them apart. In the movies they were inseparable, but in real life there was just too much going on that couldn’t be pushed the side or easily reconciled since what they both had to endure tended to mess them up in ways that are hard to describe.

It was so easy to think that their lives were the same as you saw on screen that the average moviegoer tended to want to be like their characters in many ways and it was often that people would watch these movies again and again in order to experience the same laughter and the same thrill they received when watching it for the first time. These days it’s more about nostalgia when this show comes on, but it’s no less entertaining.