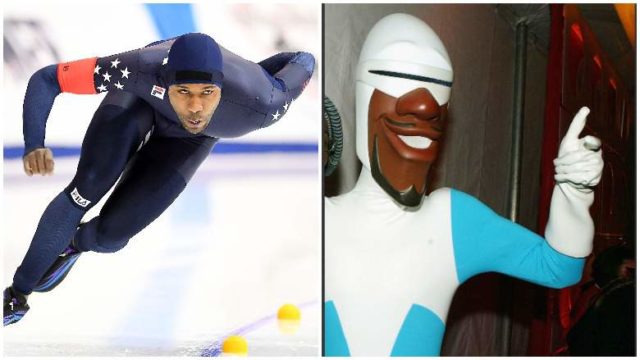 At this point it seems pretty obvious that Olympic athlete and medalist Shani Davis is the inspiration behind Frozone from The Incredibles. From the way he skates and the way he looks Frozone has taken a lot from Davis’ image and fortunately though he wasn’t given Davis’ arrogance. Recently Davis has been the subject of a slight backlash since he decided to throw a bit of a temper tantrum in regards to who got to hold the American flag for the USA during the opening ceremony. Since he’d already been to the Olympics and was such a decorated athlete Davis thought he’d been slighted and even called the deciding coin toss ‘dishonorable’ on Twitter. He then sent out a tweet that he could wait until 2022. Perhaps by then he’ll have learned a little humility, or perhaps they’ll remember this and remind him when the time comes around again.

In The Incredibles Frozone is depicted as a pretty nice and humble guy. He doesn’t go around acting the fool and taking things too far. In fact his back story states that he could have gone to the Olympics but as a super his powers would have given him too much of an advantage over the other competitors. So he backed out of it without feeling much than regret apparently. It might seem harsh to say but I don’t think Davis would have done the same.

The idea of an Olympian throwing a temper tantrum isn’t exactly acceptable to many people. While they’re exceptional athletes and above average in many ways they’re also expected to be representing their country in every way possible. I get it, everyone’s human, we all have an ego of some sort even if it’s just enough to get us through the day or big enough to fill a room. But Davis needs to get over this and quickly, because at the moment it seems that people are willing to forget about this little hissy fit and move on. If he does this again in another four years, or decides to make a big deal out of this for the rest of the Olympics then it’s fair to say that he’ll go down in history as a medal-winning Olympian, but also one that effectively ruined his chances of being remembered all that fondly.

So someone else on his team got the honor of holding the flag. So what? It’s a huge honor of course, but just being at the Olympics in the first place is a huge honor, and if that’s not enough then holding a flag isn’t going to make it any better. Plus this makes Shani look like a diva in many ways since it seems that if he can’t get his way then he’s going to cry and moan about it until someone notices him. The guy has been to one of the biggest events in the world multiple times now, he has nothing else to prove. Well, he didn’t at least. Now he has to prove that he can move past it and not allow people to remember him as an arrogant loudmouth.