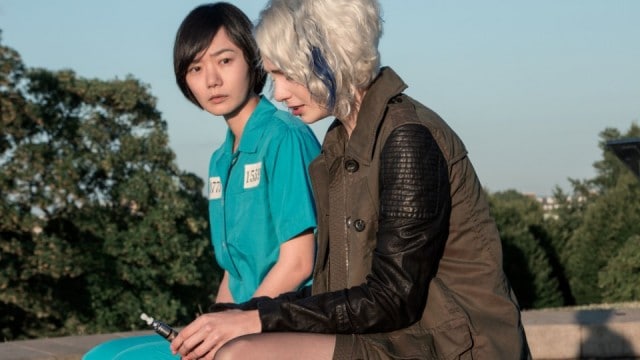 Sense8 is not perfect television. It’s filled with hackneyed villains and predictable background stories for its main characters, and doesn’t really have a consistent sense of momentum as it bounces from story to story. And yet, I’d be hard pressed to name a more impressive show in 2015 than Sense8, thanks to an episode like “Demons,” which embodies everything about this show that makes it unique, special, and, in many important sociological ways, necessary.

From beginning to end, “Demons” moves with a distinct purpose that previous episodes have lacked. Completely disinterested in the proceedings of each story (Sun goes to jail, Riley gets threatened, Nomi and Amanita run away), “Demons” draws on characters growing more intimate with each other, in various ways. And as always, those moments of intimacy are Sense8 at its most ambitious and rewarding, pulling these characters together from around the world and finding common threads in their journey of identity: like Riley and Sun, who connect while sitting alone in a park and a jail cell (respectively), talking about losing their mothers at an early age (and smoking hash), giving a bit of depth to two characters who haven’t had a whole lot to say to this point, and building on the interwoven connections between other sensates in previous episodes.

It doesn’t stop with Riley and Sun, obviously – hell, Sun’s not even Riley’s first visitor of the episode. “Demons” opens with her channeling Will to escape from the thoroughly unconvincing Nux, letting the rest of the episode rest in the afterglow of that dramatic exchange. As the title suggests, “Demons” circles around each character, examining the individual challenges they’re all facing – Nomi’s brain problems, Riley’s loss of self, Wolfgang’s inadvertent temptations of Kala – and using them to draw the sensates closer and closer – until the ‘release’ of tension midway through the episode, with arguably the most elegant, tasteful orgy scene ever produced on film.

Rather than continuing to question what is happening to them, the sensates are beginning to embrace these seemingly random connections to each other. This not only helps explore characters and their lives in more specific ways (as characters introduce each other, and begin to have conversations), but in drawing the parallels of their lives together, it reinforces the central idea of the singular human experience, and delivering on it with a visually striking sexual metaphor. Sense8 understands the true beauty of life, how people from opposite ends of the earth share something beyond the physical space we live in. Our cultures and families give us all different forms and voices, but underneath it all, we are one and the same, people sharing a physical space and embarking on the same spiritual journeys.

It gives “Demons” a definitive arc previous episodes have lacked, strong visual metaphor that fills the space where plot has existed in previous episodes. Lingering on conversations between Riley and Will, and later Riley and Sun on both ends of the episode also really propels the central sequence. These are moments when the self-doubt of its main characters, and how it defines their individual conflicts in life really begin to breathe, giving color to each individual story where the actual plot details fall laughably short (Capheus’s gangster employer has a daughter with leukemia that “means everything in the world to him”? sigh). Until the real plot of the show comes to life – aka whatever is happening with Jonas and those doctors chasing Nomi earlier this season – Sense8 will have to rely on its amazing ability to craft emotionally resonant interactions between characters, something “Demons” shows Sense8 can handle with a wonderfully precise, cathartic hand.

– After a lengthy vacation, Sense8 reviews are back (and will continue through next week)!

– Lito watching Hernando enjoy the luchadores is such a beautiful, touching moment that summarizes how preciously Sense8 treats the idea of love.

– Ugh, I knew Daniela was going to be a terrible person, but it’s still disappointing to see her snapping photos of Lito and Hernando making out.

– Amanita’s mother is an evolution professor, so we can get some expository information out of the way.

– “I’m afraid I’ve made the biggest mistake of my life.” I am really interested to see how the show works Sun out of the literal corner they’ve painted her into.

– “Where are you from?” “The future.” Angelica returns!

– Sense8′s appreciation (and respect) for the human form is wonderful, and makes for powerful imagery admiring the physical shape, like Lito’s lapdance for Hernando, or Nomi and Amanita cuddling in bed. Awesome stuff.