Home
Television
Scorpion
Scorpion: Walter is trapped in a Rocket and Takes Vacation from Reality 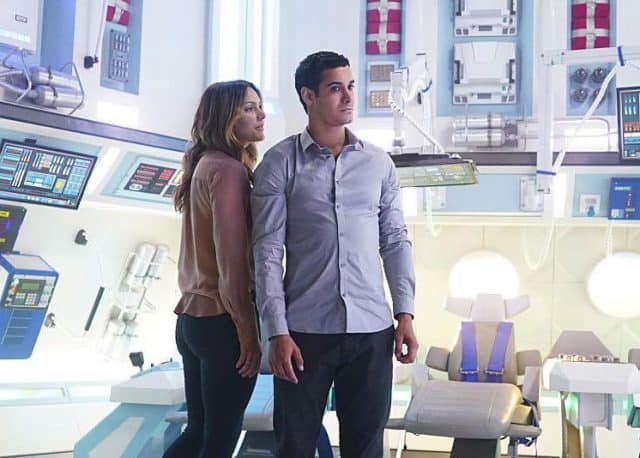 It’s never a good thing to have a rocket malfunction. Though when it comes to Team Scorpion, things tend to get worse before it gets better. The team, well Walter, heads to space in this week’s episode of Scorpion.

Mr. Richard Elia, whom we know from the first season, enlists the help of the team. The tech billionaire wants Team Scorpion to take a look at a rocket that he built based on Walter’s rocket research. It sounds like every corporate business owner intends to get a piece of the space pie. Things were going according to plan as the team fixed the rocket’s overall engineering design, but then lightning struck the rocket, causing its computer system to malfunction. As a result, Walter made the split decision to stay inside the rocket as it launched into outer space.

If real life is in anime format, there would be a large sweat drop on the back of my head. The reason for that is when Walter began to hallucinate due to lack of oxygen. The person that the genius imagines is none other than Paige Dineen. Walter imagined that he’s conversing and dancing with Paige, all the while whispering sweet nothings to her. Walter-boy, you do know that the rest of the team can hear you right? Oh wait, you can’t because you’re completely loopy from hypoxia! Then again, that is a good thing because Russia’s help is unneeded, so Agent Gallo doesn’t have to make that uncomfortable phone call to the White House.

The scene where Walter danced with imaginary Paige certainly brought back memories. She wore the same dress that she wore to the art auction two years ago courtesy of Henrietta Lange. Things then got a bit awkward when Walter started kissing imaginary Paige. I snickered as I watched Sylvester, Toby, and Richard watch Walter in his hallucinating state of mind. The part where Paige told everyone to get out of the room so she could talk to Walter in private was amusing. “Happy, you too, I can hear you over the mics!” “Damn it.” I love you so much, show. You and Lucifer.

The episode then took an emotional turn when Walter confessed his love for imaginary/real Paige. The genius had hoped that the team liaison would want to be with him instead of Tim. Love hurts, Walter. It truly does. I have to agree with Richard though; Walter has to try to find something to occupy his time and his mind so that he doesn’t have to keep avoiding Paige and Tim based on his triple-A plan.

Reality Paige managed to get through to loopy Walter. She got him to pull the lever that would blast him out of the rocket as it enters the Earth’s atmosphere. The downside to that is that Walter thought the lever was Paige’s hand and he held onto it longer than he should’ve. Good thing Tim got one of the naval ships to launch a torpedo in the water to create bubbles to break Walter’s fall into the Pacific Ocean. I held my breath after Agent Gallo failed to catch Walter in mid-air and was glad that the team was able to come up with a Plan B. The Homeland agent earned an amused eye roll from me when Happy inadvertently called him old.

In the end, Walter made it back to Earth safely aside from some internal injuries. Paige tried to get Walter to recall his confession of love to her, but Toby told her to back off. The liaison has moved on with Tim; she should let Walter do the same. I think that Walter won’t be moving on from Paige anytime soon when the genius suddenly has a hankering for some Baked Alaska. Oh, good god (sorry, Lucifer).

Scorpion Season 3 Episode 3 Review: "It Isn't the Fall That Kills You"

Walter gets stuck in space as he hallucinates Paige in this out of this world episode of Scorpion.