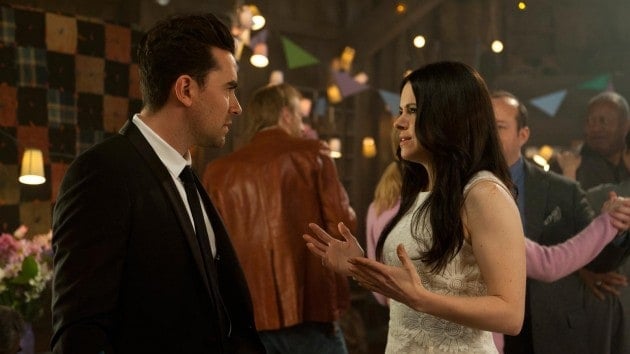 With everyone gathering at Mutt’s barn for a “secret” birthday party for Moira, Schitt’s Creek penultimate episode appeared headed towards an explosive climatic moment, one that would send the various members of the town spiraling into the season finale. And yet, “Surprise Party” never reaches that moment, instead opting for a much more sedated third act, doubling down on material from previous episodes and letting everyone relax a little bit before the season’s last episode. Quietly, it makes for a very fun episode, one that captures the endearing nature of its characters at once: in what may be an ominous sign, “Surprise Party” is the most positive-thinking episode of the season.

And who would expect such a calm episode stemming from a surprise birthday party for Moira, one she tries to ruin by getting involved with, to boot? The real charm of “Surprise Party” is how it teases the audience with disaster, using familiar beats and character traits to set up a series of potentially troublesome situations. There’s the party Moira is actively trying to ruin, Stevie’s attitude towards David, and Mutt’s beard teasing Alexis; and yet, “Surprise Party” avoids all three catastrophes, slyly choosing to engineer a peaceful, heartwarming ending out of what appears to be the typical dramatic arc of a Schitt’s Creek episode.

It makes for a bunch of fantastic little moments that aren’t flashy or self-important: Moira and Johnny share a cute little dance at her birthday party, Mutt is left alone when Ted returns from his vet conference, and Stevie and David find, for a brief moment, the happy place between “sex buddies” and “enemies.” These endearing moments don’t come without the typical Schitt’s humor, but even those juvenile notes are given a bit of an extra touch in the episode, primarily the closing scene: Moira grabbing Johnny’s tush isn’t just a sign of her being playful, but a sign that Moira and Johnny are finally finding their place in the town, fitting in and even adopting some of their odd mannerisms as their own (like Moira, the mayor was getting himself a fistful of gluteus maximus during a slow song).

With all the potential drama surrounding Moira’s party, it seemed like everything was heading for disaster, but instead, “Surprise Party” opts for a cathartic ending, rather than an clever one. “Surprise Party” doesn’t make Schitt’s the town of doom and ironic gloom; it offers up a different vision of the town, one which can truly heal the inner conflicts of the people who’ve appeared in it this season. As a result, the episode ends up acting as a nice little framing device for Schitt’s Creek‘s first season as whole – and most importantly, a great reminder of the strong familial bond that keeps the balance between the Rose family being empathetic and ridiculous in check.

– I didn’t have a place to mention it above, but the little bit with Alexis and Mutt changing stop signs was probably the funniest throwaway gag of the season. “We better get this back up quickly.”