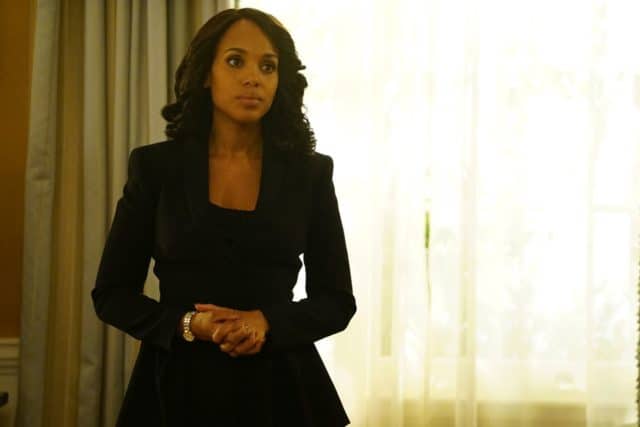 The episode opens and moments later, Jake shows David where he buried Liz North. He tells David he must continue to see Mystery Woman. They need to keep tabs on her. He can’t leave her out of his sight.

Meanwhile, Mystery Woman has Mellie’s office bugged. She also introduces her to her new assistant, who is also working for Mystery Woman. Mellie is not in control. She will simply do everything she is told.

Liv arrives at OPA to find Huck guarding the door. Peus is inside. He wants Jake to resign. He threatens them with proof of Jake getting rid of Liz North. Who will replace Jake? Peus. Peus wants to be the Vice President.

Jake refuses to resign. He’s supposed to be protecting Mellie. Liv wants Jake to be head of NSA again. She doesn’t want them to kill him. Meanwhile, Mystery Woman shows up at the White House. Fitz asks her to cut the crap. He knows who she is.

Suddenly, the Secret Service comes in and drags everyone away. There is an unauthorized drone in the White House airspace. Everything is on lockdown. Mystery Woman and Abby get taken down to a secure location with no signal to the outside world. Mellie and Fitz get brought into the Oval. Doors open to reveal Liv, David, Jake, Abby, and Cyrus waiting. The drone is theirs. In lockdown, they have 75 minutes to figure things out.

Huck is flying the drone. Quinn tells him Charlie is missing. Huck tells her about the talk he and Charlie had. Charlie thinks Huck and Quinn still have feelings for each other. They laugh it off. Huck lands the drone. Next up, the bomb squad will go in.

Everyone in the Oval discusses what to do about the VP situation. Firstly, they should keep Peus away from Mellie. But she needs new candidate. Cyrus thinks he should do it. Rowan walks in. They need his help. They can’t do this without him. He forces Fitz to say it. “We need your help.” However, Rowan won’t. He won’t be part of a suicide mission.

Amidst all this, Mellie starts to panic. She says she regrets Defiance. Things escalate from there. Rowan calls Fitz worthless. After Fitz almost punches Rowan, Rowan tells Liv he’s heard people call for mercy. It’s “undoubtly marked by shame.” but “the moment it’s whispered, the agony disappears” He thinks they should call mercy. They have lost.

Back in Rowan’s room, there’s a knock on the door. Cyrus walks in. He takes Rowan into Fitz’s secret wine cellar. As they drink, Cyrus realizes they have been reduced to nothing. They used to run the world. He had the Oval, Rowan was above the oval. Deep down, Cyrus and Rowan wanted the same things. They are the real patriots. As Rowan continues to search for wine, Cyrus tries to stab him from behind. Rowan grabs his arm and Cyrus reveals he’s taking revenge for Vargas. The world needed Frankie Vargas. He was better than them.

Meanwhile, as David and Fitz ponder the hardships of dating powerful women, Liv tries to get to Jake. Jake tells Liv Fitz isn’t worth helping. They’ve been down this path so many times before. Liv tells him that she saved Fitz, she saved Jake, and now she wants to save Mellie.

In a moment of weakness, Mellie confesses to Marcus that she isn’t sure she deserves to be President. Should she have conceded like Liv told her to? Marcus gives her the pep talk of the century. She’s a leader. She needs to do her job. OPA will take care of the rest.

Mystery Woman starts to wonder if something is going on. The bomb squad has cleared the drone. Mellie steps in. She’s going to fight the Mystery Woman. She will deal with the consequences. She asks Cyrus to be her VP. He refuses. He can’t.

Liv informs Quinn they’re good. Huck turns off the computer. He tells Quinn he’s found Charlie’s location. She goes over to him and assures her nothing is going on. She and Huck were in love, but it wasn’t the kind of love they have.

Mellie steps up to make an announcement in front of the press, whilst Mystery Woman watches still in lockup. Mellie announces Luna Vargas as her VP. Furious, Mystery Woman asks the Secret Service man guarding the door to open it up.

The door opens. It’s Liv. She’s her Chief of Staff. Mystery Woman is now her prisoner.  “You can’t take Olivia Pope. Olivia Pope takes you.” Now all they have to do is take on Peus.