Home
Television
Scandal
Scandal 2.16 – “How Do You Fix Betrayal?” 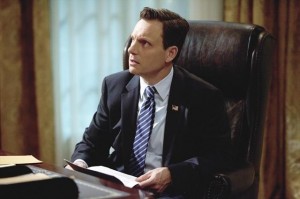 Is it just me or does Fitz needs to put on his big-boy britches and move the hell on?

After damn near a month, Scandal finally made its way back to our TV screens, and while the pace of the episode was even enough to give us a breather from the last round of episodes, it still had me chanting, “Be still, my heart…” throughout the hour.

The Scandal of the Week story featured Sarah Stanner (guest-star Lisa Edelstein), a housewife who was caught up in the latest political “Oh No She Didn’t!?” event, which involves an affair with a Senator who was up for Verna’s empty seat on the Supreme Court. Fitz and Cyrus almost had the guy cleared for duty, but the media dug up the 15-year old illicit affair, which threw everyone off their A-game. But once a good friend of Sarah advised her to bring in Olivia Pope and Associates, the already ugly debacle got downright “ugly.”

After the almost weekly cliffhangers of the Defiance Conspiracy, this story arc was a welcome return to the fast-paced case of the week episodes that got fans hooked during the earlier days of Scandal. The writers have yet to drop the ball on weaving the internal conflict of Olivia Pope’s personal life with that of her professional life through the common thread known as her clients. There were a few instances where I almost felt that Sarah Stanner’s rapidly deteriorating marriage would have any correlation with Olivia’s issues, but then one word and two scenes slapped all tendrils of doubt from my mind (like the medicine I’m currently taking for an illness at the moment): “Betrayal.”

The two scenes that further connect Olivia Pope and Sarah Stanner’s worlds together like two bloody war-torn hearts were, of course, the Olitz phone call taking place while Sarah and her husband argued in the background and the heart-to-heart between the two women afterwards. Let’s start with the first scene, which was what I had been itching for all night.

Fitz needed a reason to contact Olivia and Cyrus filling him in on his former lover being the driving force behind saving Sarah’s reputation was all the excuse he needed. But Fitz didn’t call to demand her to stand down from the case (which would have been completely foolhardy on his part), he called to ask her why did she ‘lie’ about her faith in him being the President of the United States. As Fitz said, “forget Defiance.” The ultimate betrayal for him happened when Olivia lost a little faith in him doing the job she swore up and down that he was the right man for. So, yea, Fitz is still hurt. Sort of childish hurt, but hurt nonetheless. I mean he’s broken. He told Liv that she ruined him. Ruined. That’s a heavy word to sling in the game of love and Olivia felt every ounce of it, yet threw it back without hesitation. But folks, this is only half of the scene.

While Liv and Fitz had it out on the phone, you could her Sarah’s husband (whose name has escaped me at the moment), laying into Sarah about not trusting her and being betrayed after all these years on not only infidelity, but on the highly probability of their teenager is not his own as a result of her adulterous ways. Two men betrayed by the two women who they thought they knew, who let them both believe a lie that not only blew up in their faces years later, but gave them a false sense of being. 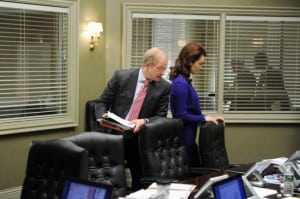 Hear that sewing machine of good writing churning away? That’s Scandal for you…

The betrayal within Olivia and Sarah’s love lives wasn’t the only kind deception being served in this week’s episode. There was the White House squabble between Cyrus and Mellie that revealed that neither one of them have really cracked Fitz’s resolve in his distrust against them. Cyrus, being the bulldog he is known to be throughout the first half of the episode, had the wind knocked out of him when Mellie cracked the code in figuring out that Captain Jake Ballard has become Fitz’s new number two person. It might be just me, but I’m having a ball watching Fitz treat Mellie and Cyrus as the children they constantly resort themselves to be when it comes to Fitz’s attention. I’m just not a fan of the complete jackass behaviour the POTUS has against Olivia Pope.

And what’s the deal with Capt. Ballard anyway? Scott Foley has done a remarkable job with the character, keeping us on our toes and making sure that we don’t fully trust the guy just yet. It seems like he might hit a brick wall now that he’s beat a paparazzo to high hell for taking his pic with Olivia. Plus, am I the only one who thought that was Huck delivering that ass-whopping?

Speaking of the hostage crisis situation, I’m surprised those papers didn’t list that the CIA director was the mole and needed to be stopped immediately. Maybe it only listed the hostages whereabouts and not the mole himself, which is why Quinn and Huck were on the case like white on rice this week. Man, I’m really beginning to love these two together and I’m excited to see Quinn take on this new life with open arms and less scrutiny, that is if there is any left. It reminds me a bit of Batman and Robin, with Huck taking on the Dark Knight mentor role with glee, just as much as Quinn’s having fun with her role as the trainee, or Robin if you will.

A few other tidbits from the night that stood out to me were Abby slyly calling Harrison out on the Gladiator speech he hid behind as a reason he ruined her and David Rosen’s relationship and the whole moral clause issue. With Harrison, I was pissed he even used that as an excuse to justify what he did to save Olivia’s behind. Granted it did work out in the end, but he could have at least been a “person” behind it instead of being ” a cold, soulless Gladiator.” With that said, I do believe Abby understood why he did it, but was just appalled at how cold the blow and explanation behind it was delivered.

As for the morality clause issue, I was cackling with glee at how the board members of the firm Sarah works, mainly the senior board member, changed their tune when Abby and Harrison turned the morality clause mirror against them, because the notion of such a clause is, to me, completely and utterly stupid. Everyone, and I do mean everyone, has done something he or she was not proud of, usually at a young age. So for anyone to have something like a morality clause, especially one that can include behavior done before an individual is an employee at a company, is like setting a trap door for yourself to fall through when you least expect it. That’s my opinion on that particular issue and I’m just going to leave it at that.

So what did you think about Scandal this week? Did I leave out anything you wanted to discuss? What are your thoughts on the storylines this week? Let me know below!