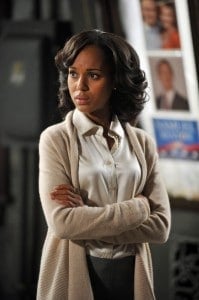 ABC would air this episode of Scandal during the week of the Presidential Election, sending my paranoia about how dirty Washington, D.C. could get into a whole new stratosphere of “WTF?!?” Seriously, is Oliva Pope truly a White Hat wearer or simply a White House cheater? Inquiring minds want to know…

So everyone in the Scandal Cabal Club sealed their bright futures and careers in Washington, D.C by having Hollis Doyle’s company and Cytron work on software that would moonlight as slot machines, but were “unofficially” used as voting machines to make sure President Grant’s election was a bonafide win. I think it’s clear how major this revelation is, not just in the context of the story, but the show itself.

Who would have thought that the “Who Is Quinn?” mystery would lead us into a conspiracy theory that could topple everything we’ve come to know and love about Scandal, its characters, and the general aspect of whom to trust in the show, period. This isn’t a serious catastrophe at Seattle Grace or some random “Holy Sh*t” moment from an episode of The Walking Dead. This is, again, major. A ‘major’ I’m a bit scared to see where it will possibly lead in the next 17 episodes of Scandal‘s second season, because either someone is bound to die to keep this huge of a secret or Olivia Pope could be laid out to dry as a scapegoat of sorts. Either scenario could be catastrophic and the fallout equally tragic.

The one thing that is bananas about the entire situation is mostly Olivia’s involvement, which muddles everything we think we know about her. Sure, sleeping with a married man who eventually becomes the President of the United States and helping shady politicians get off scot-free doesn’t scream “Model Citizen!” when it comes to her character . But helping rig a Presidential Election is another ballgame altogether and really paints her in a light that is most unflattering and completely messed up. It makes you question everything we’ve come to know about her in the 12 episodes of Scandal‘s existence. And I hate questioning Olivia Pope in anything…

Then to add insult to injury (and follow by setting both on fire in a fit of rage), Olivia had to help the man she participated in screwing over by 2,000+ votes during tonight’s Scandal of the Week. Although Governor Reston (Tom Amandes) wasn’t without his own skeletons and demented political aspirations, having to face what she possibly helped created (albeit inadvertently) had to have taken a toll on Olivia in some capacity. But said compassion might have went out the window once it was discovered that not only did Reston kill a man in cold blood, but he sent his wife to jail for the crime as well. So maybe Olivia and the rest of the Club helped America dodge a bullet by making sure that lunatic didn’t take office… Either way, Olivia Pope is still living foul and I don’t know how I feel about that now.

But enough gloom and doom, let’s discuss some other aspects of the episode:

– David Rosen and Abby are in trouble. The new lovebirds’ curiosity has them facing a nugget of information they probably wished they hadn’t dug for like a squirrel looking for a nut, putting them in more danger than they could have ever imagined. We know Cyrus isn’t far from dispatching someone who causes trouble. 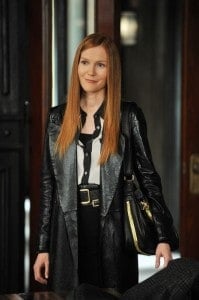 Lord knows what Hollis Doyle is capable of…

– Is President Grant himself involved with his sham of a presidency? The man where “all roads lead to” was noticeably absent from tonight’s episode, but while his whereabouts weren’t really all that suspicious, his close relationships with those five Club members, and I do mean close, speaks volumes.

– Cyrus is a “Monster,” indeed. The scene where Cyrus put the fear of God Almighty in Mellie tonight had my spine calling for an exorcist or something, because the chills that scene was giving was not of this world. Cyrus is so cold that I am actually scared for James now that he’s the new White House reporter hellbent on making Cyrus pay for not getting him a baby. Don’t push him, James!

– Poor Harrison and Quinn… These two are clueless and it’s a sad state to be in. I’m wondering if Harrison’s past plays into anything Club related or if he’s in the same boat with Abby and Quinn being Olivia’s three good deeds she’s done since being in power in Washington?

– Huck’s First Date. It’s about time that Huck has some semblance of normalcy in his life. With that said, I wouldn’t be surprised if his new love interest will end up being killed or is a rival spy of an enemy from his past. If this episode of Scandal has reiterated anything to me tonight, it would be that nothing is as it seems and to expect the unexpected.

What did you think about tonight’s episode of Scandal? Did your jaw hit the floor as hard as it did two weeks ago? Has Olivia Pope’s star been tarnished a bit?