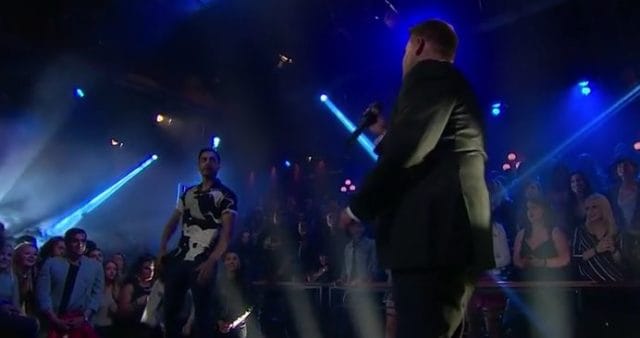 Many people are familiar with Riz Ahmed from titles like The Night Before and Rogue One: A Star Wars Story.  I happen to like his small part in the show Girls (which is now over).   I mentioned last week how I’m 100% convinced that Ahmed is going to be a relatively big star.   He’s incredibly talented but happens to also be an amazing comedic actor as well.   Also, if Ahmed’s acting career doesn’t work out, he can always fall back on rapping.

Most people don’t know this but Riz Ahmed has had rapping skills for years.  In fact Lena Dunham pleaded with Ahmed to do some rapping on the show Girls which is why you see that party seen with him on the mic doing his thing.   I have a feeling James Corden knew this but I’m not so sure he was prepared for the ripping he would take last night.

Rap battles are becoming a regular thing on The Late Late Show but last night Corden was no match for Riz Ahmed who proved that he’s a force to be reckoned with in the rap battle world.  Check out the clip below: