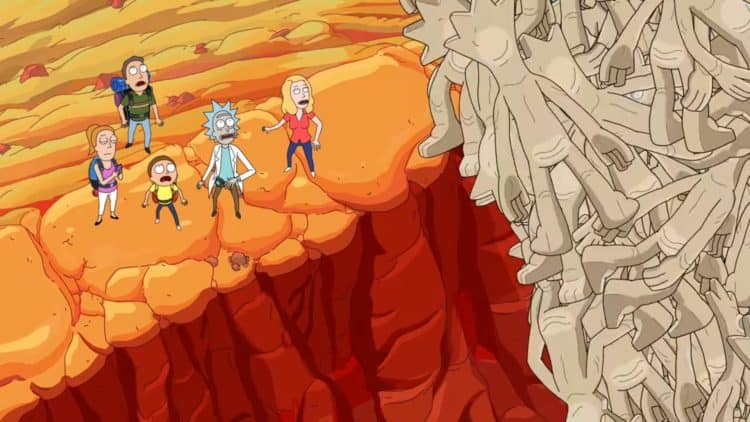 In the wake of the Emmy-winning Episode 8 (“The Vat of Acid Episode”), it would be easy for an episode pale in comparison. Thankfully, “Childrick of Mort” is a rip-roaring comedy adventure that provides a critical contrast to the episodes surrounding it. We also get a lot of Jerry in this episode, which can be hard to come by. Not only do we get more Jerry than usual, it’s Jerry doing some self-discovery and leading scenes of emotional substance. With that, let’s get into Season 4 Episode 9!

The episode begins with Jerry driving the station wagon, Beth in the passenger seat, Morty, Summer, and Rick, all in the back seat (a la Vacation). They’re on their way to go camping in the wilderness, and Jerry makes Rick swear there’s not going to be any sci-fi tomfoolery. Summer complains that she’d rather be dropping acid with her friends, and Morty says he’d rather be playing video games. Rick then gets a text and ignores it purposefully, saying, “I didn’t think she had this number.” Summer then realizes Rick is trying to ghost someone, and swipes away his phone. She reads the text aloud to the whole car, “Rick, answer me, I’m pregnant.” Rick insists there’s ‘no way that those kids are his’, but Beth (having her own issues with Rick’s parenting) demands that they go see the baby mama. Rick flips a switch, swapping him to the drivers seat, releasing wings from the sides of the station wagon, and throwing Jerry in the trunk. Having converted it to a space car, they fly off towards the baby mama. Soon, they pull up to a dusty-looking planet, and Rick announces that this is her. Much to everyone’s surprise and confusion, Rick has slept with an entire planet.

After adjusting his English-to-Seismic translator, Rick lands the station wagon on the planet, explaining that her name is Gaia. They walk up to a deep crevasse in the ground, and Rick announces that this was the ‘scene of the crime’. Getting right into things, crusty dirt people (that look scarily like a tan Gumby) start spewing out of the crevasse, falling to the ground and disintegrating. Beth steps in with Jerry’s trampoline, helping the dirt people to the ground safely. She offers that if Rick won’t raise these kids, she will. Rick then steps in and builds a funnel to safely get every dirt person to the ground. While Rick and Beth create a steampunk tower to sort and raise the dirt people, Summer and Morty are instructed to go camp with Jerry. After trying to make the kids a s’more, Summer verbally rips Jerry to shreds, and he leaves in shame. After a while, the kids decide to go off on their own, but quickly get lost. After admitting that Jerry was right, and that they have no survival skills, the two stumble upon a crashed alien ship. Thinking the console works like a video game, Morty gets into the pilot’s seat. Summer figures that the giant bong-shaped gas emitters hold the aliens’ collective knowledge (don’t ask me, I have no idea). She starts taking rips from the gas emitters, getting way too high. She tells Morty what each of the buttons on the console means, and he tries to take off. They end up peeling full speed at the sky, with no wings, in a corkscrew.

Meanwhile, Rick and Beth have created an impressive empire of dirt people, having built out an entire civilization around the tower, and sorting every dirt person with a purpose for their life. Those who have no purpose are dubbed ‘uproductives’, and are sent to a ‘free-range hospitality area’ (which is just a tube out the back to a giant puddle of mud). We find Jerry trying to skip a rock in a stream, but he falls in, and gets ripped away with the current. He gets sucked up into the tower’s hydraulics system, and the tower sorts him as ‘unproductive’ and shoots him out the back. There, he meets a group of dirt people who are very easily impressed. After showing them how to make a s’more, he becomes their leader, vowing that ‘the people in the tower are bad’. He shows them how to camp, and finally feels useful.

Rick and Beth are about to christen a giant space ship for the dirt people (the last step in their evolution), so they can explore the galaxy. Just as things are going well, a giant talking figment in the sky starts talking, “Pam, baby, I’m back!”. It’s revealed that this god, a Zeus, is the real father of the children. He gets in a few jabs at Rick, infuriating Rick. In an epic battle, Jerry arrives with his tribe of camping dirt people, ready to wreak havoc on the civilization. Rick pinpoints the source of the Zeus’ power (whose real name is Reggie), and uses sci-fi tech to go up in the sky and literally fight God. He hands Beth a giant blaster, telling her, “You handle the hippies, I’ll handle the off-brand Yahweh.” What follows is an amazing three-way sci-fi Battle Royale between Reggie, Rick, Jerry, Beth, and all the dirt people. Right about the time Rick is getting beat by Reggie, Summer and Morty crash into Reggie’s left eye, killing him. Rick meets the kids on the ship, explaining that Summer was right about the collective knowledge, but she was inhaling from the wrong end (essentially inhaling brake fluid). Rick pilots the ship back to rescue Beth and Jerry, Pam/Gaia having found out about Reggie’s death. She begins to flood the Earth with molten lava, and Jerry saves Beth from falling into a lava pit. Rick gets there just in time to save Beth, Jerry, and a few of the dirt people. They get back to the station wagon, Rick giving the space ship to the dirt people, and Jerry showing them how to use a lighter instead of starting a fire the hard way. As the Smith family flies away, Beth worries that Pam/Gaia will raise the dirt people to hunt and kill Rick, to which Rick says, “Oh most definitely. I put a tracker on the ship, so if they come anywhere near me, I’ll blow it up.” Classic Rick.

We actually get to see Jerry have a hero moment (which is few and far between). The episode follows his journey of self-esteem, realizing he only took the family camping to make himself feel important. And before he has his big moment of saving Beth, he’s going ‘God Mode’ with a magic staff that Reggie gave him power to use. We get to see Jerry in a totally fresh way, watching as he goes toe-to-toe with Beth and Rick’s sci-fi tech (which is a continuation of his confidence development from “Rattlestar Ricklactica”). Additionally, we get to see Summer and Morty have their own B-story. We don’t get many moments of them being siblings and being totally awesome together, usually it’s with Rick. So this offered a new perspective on what Summer and Morty adventures could look like in the future. We also get to see Rick and Beth bonding, which is inherently really beautiful. They’re finding each other as family in older age, and forming a relationship completely from scratch.

This episode furthers the development that we’ve seen set up in Season 4. And as the story approaches the Season 4 finale, you can feel the tension getting thicker, the stakes are getting higher. The drama, fight scenes, and dynamics are really elevated this season, and Episode 9 leads us perfectly into the finale (“Star Mort: Rickturn of the Jerri”). And while it’s not deserving of a totally perfect score, it’s an extremely solid episode that fits perfectly into the pace and tone of Season 4.

January 13: Top 10 Events This Day in Movie and Television History
Comics Lists News Things You Didn't Know Whatever Happened To