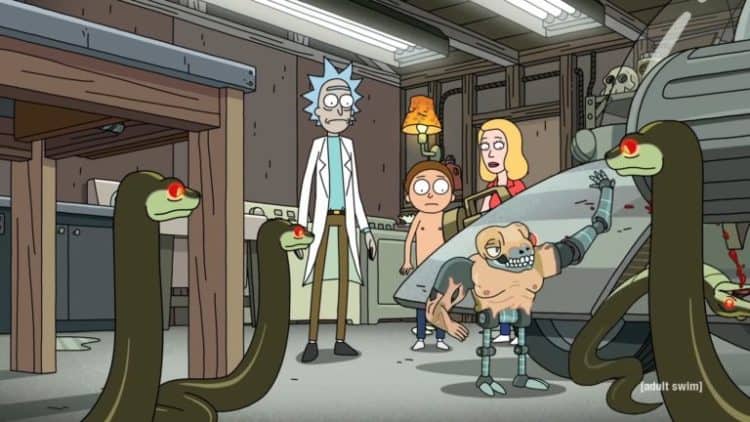 It’s no surprise Rick and Morty is still going strong. Since 2013, the show has expounded on its own lore and mythology, creating an entire universe of dynamics, characters, and motivations. It’s through this universe that the writers can tell such detailed and self-referencing stories, like the one in “Rattlestar Ricklactica”. So grab your regular old plumbus, and let’s break down Season 4 Episode 5!

The episode begins with Rick giving Jerry neutral buoyancy for 10hrs while he hangs the Christmas lights, so he can jump from the ground to the roof with little effort (so long as he keeps his shoes on). Shortly after, Rick and Morty head to space, but they bust a tire. Rick tells Morty to stay in the car while he fixes the flat, but Morty decides to come out anyways. Morty gets bit by a space snake, who Rick subsequently kills. With the analyzer in his car, Rick makes an antidote to the snake venom, discovering that the snake’s home planet is all snake-people who are having a race war that’s about to kill everyone (but hey, Rick also finds ‘snake jazz’! I encourage you to look that up.). After he’s cured, Morty and Rick arrive at the house again, with Morty feeling guilty about his part in the snake’s death (who Morty believed to be the snakes’ version of Buzz Aldrin). Morty goes to the pet store, finds a snake similar to the space snake, holds a vigil for the original snake, names the new snake ‘Slippy’, and sharpies matching patterns on Slippy to the original snake. After getting bit many times, Morty shoves Slippy into the snake space-suit, takes the flying car out, and flings Slippy towards the snake planet.

Meanwhile, Jerry decides to take his new abilities to the city, crashing a game of street basketball. He says he’d like to “exercise a certain power”, to which everyone thinks he’s a white supremacist. In the kerfuffle, Jerry loses one of his shoes, and proceeds to float up towards the sky. At home, Summer, Morty, and Rick are playing Downbeat in the dining room, and Beth comes in to ask about where Jerry’s at. Rick responds that Jerry is fine, so long as he doesn’t “mess up wearing shoes”. The four of them immediately realize that Jerry is too incompetent for the ‘moon shoes’, and Beth and Rick head out to find him. In the next scene, we see Jerry hovering in the air, having removed his pants and tied them together to collect rain water (which weighs him down). After answering Beth’s call (to which Rick tries to save Jerry the embarrassment of Beth finding out about his epic fails of the day), Jerry says the situation is “win-win” for him. If he dies, it’s on Rick, and if he lives, it’s completely without Rick’s help. Jerry tries to employ a boulder to weigh him down, and keep him on the ground, but quickly loses that. He endures a hilarious amount of ceiling fan battery, and ends up floating back towards the sky. In pure happenstance, he’s able to catch a plane flying in the sky, and that works for the moment. But after the 10hrs wears off, Jerry catches a large fir tree, and is able to make it back to the ground.

Back at home, Morty is in his room when a mechanical snake appears (think Terminator). Just before that snake can kill Morty, another snake appears, killing the first snake. The house begins to become flooded with snakes jumping out of portals, trying to protect or kill Morty. Beth, Morty, and Rick reconvene in the garage, where Rick gives Summer and Beth guns to defend themselves while he and Morty go to the snake planet. When arriving, they find out that Slippy united the snakes to overcome their race war, but they split the snake planet into two factions; a nation that wants to murder Morty, and a nation that wants to save Morty. Rick mentions that the snakes should have a time machine in the Snake Pentagon, but upon seeing it, they realize the time machine isn’t complete. They are then confronted with future versions of themselves, with snake costumes, who have the formula in ‘snake language’ for the time machine. Rick and Morty travel back in time to 1985 at ‘Snake M.I.T.’, and drop off the instructions to the time machine. Once the snakes start time traveling (doing things like killing Snake Hitler and saving Snake Lincoln from assassination), they begin to create time loops from all the changes. After an epic snake-Smith family battle on the front lawn, the snakes begin to eat their own tails, and the Time Cops (from Season 2 Episode 1) come to clean up the mess. In the final moments, we see Jerry on top of the house, plugging in the lights, claiming that he never went anywhere.

This was a really ambitious episode for Rick and Morty. The story itself is lengthy, and there’s no real shortcut to telling it. Referencing the iconic Battlestar Galactica, this adventure is dizzyingly self-referencing, and could have tripped itself up at any corner. Instead, every detail is executed to perfection, with no stone un-turned. It’s a really fresh story for the show, as they haven’t touched time travel (and made it the main story mechanism) since Season 2 Episode 1. They are really setting the scene for Episode 6 “Never Ricking Morty”, which is even more self-referencing, and even more off the rails (quite literally). The transition feels not only natural, but invigorating. Also considering that this season had two premieres (the first 5 episodes, then after the COVID crisis, the last 5 episodes), it’s impressive how well they were able to bridge the season/stories.

While this episode is a home-run for continuity and ambitious story-telling, it lacks some of the classic humor and levity that we’re used to with Rick and Morty. For that, I have to take off a slim .5 points. But all things considered, this is a really impressive episode of Rick and Morty.