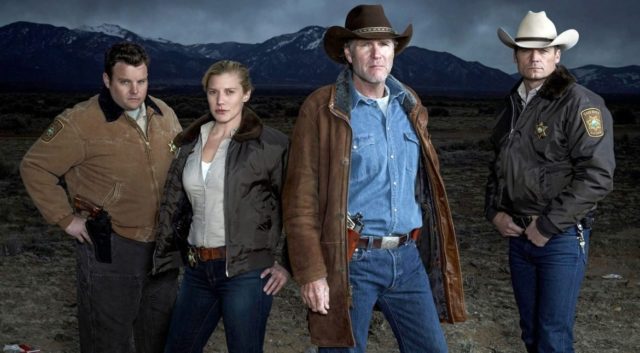 While we’re not the most consistent watchers of Longmire here on TVO the new trailer gives out a nice amount of info.  For one it looks like someone’s in a world of hurt. Being staked to the ground in the middle of nowhere is probably one of the worst tortures to endure. Worse yet is the fact that no one seems to know where he is, which means that those who left him are waiting on him to die due to exposure. In the elements it doesn’t really matter where you’re at, being half-naked tends to do a number on a body regardless of whether it’s warm or cold. Those late night to early morning hours are enough task the body in terms of warmth and can actually allow the environment to have its way with you.

The sheriff seems as though he’s contemplating quitting, but the feeling is that he’s got too much left to do, too many irons still in the fire, and it’s best to keep going until he’s got his business settled and the last of the bad guys that want him gone are taken care of. That’d be a hard proposition for anyone but the thought of leaving unfinished business behind, especially if that includes a missing person, is something that no law enforcement agent could possibly rest easy with.

Of course it’s not bound to be an easy time moving ahead anyway since his enemies are already gearing up for what seems like one nasty fight. The body seated in the chair and sporting enough arrows to make it obvious that he was being used a target practice is a good sign that things are not going to go as smoothly as anyone would want. And on top of that a pregnancy wouldn’t exactly work towards doing anything other than complicating matters now would it? The sheriff seems to have his work cut out for him and there’s no shortage of pit stops along the way.

Sometimes it seems like you’ve been on the job too long, the years start to press in on you, and the pressure that you’ve been under for so long begins to finally take its toll. For those in law enforcement you can’t help but wonder what kind of pressures they go through each and every day, nor how they deal with it on a constant basis. They train, the anticipate, they plan, and in the end things can still go south in a big hurry. And it’s not a one and done deal either, it’s a continual thing that people in the real world deal with all the time. In film and on TV the fictional officers might get to stop when the director yells cut, but the toll that their characters feel comes through loud and clear on the screen.

Longmire is coming into its final season, and for many fans this is a farewell to an original series that has been well liked and very well-received. What’s going to be used to fill its spot isn’t known just yet, but whatever it is will need to be something just as original and just as compelling.