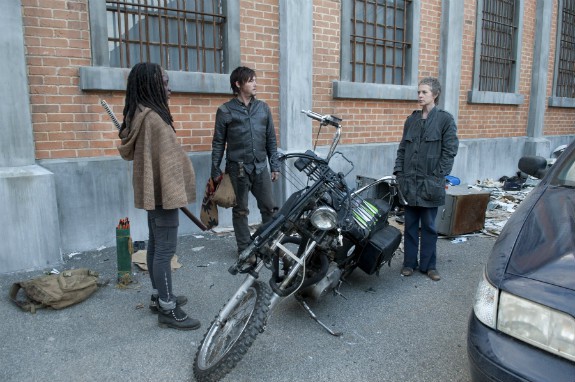 The Walking Dead finale was, no question, one of the most anticipated finales of recent memory, due mostly to the nearly perfect slow burn towards a clash between Rick’s Prison group and The Governor’s Prison.  Not a just war at all, the conflict was motivated from the beginning by The Governor’s deteriorating mental state, and rising megalomania.  The Governor became one of the series’ most complicated characters, perfectly adorned with the sociopathic world-view needed to survive in the zombie apocalypse, but lacking enough humanity to become a warrior for man-kind.  In some ways he mirrored the worst emerging qualities in Rick, who ultimately recovered from his slide towards The Governor’s “Kill or Die” mentality, but for the most part he was unlike anyone we’ve ever seen.  The overhanging question tonight was:  would The Governor survive through the finale? 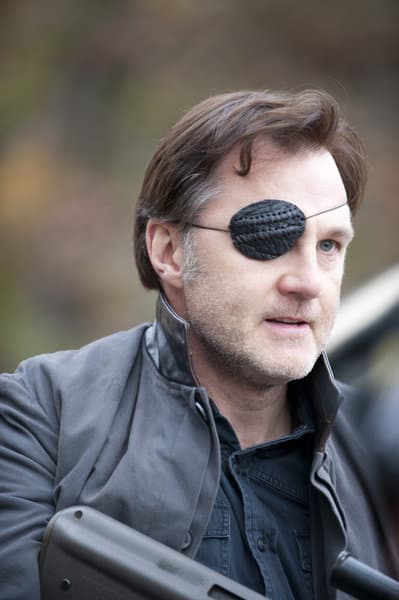 With all of the anticipation out there in the fan community, actually producing something that lived up to the energy being produced in forums and chat rooms would be really difficult.  A tough task for sure.  The Walking Dead fandom has been turning over every clue from the season, putting forward their own scenarios, and building possible endgames that fit the causality of the show perfectly.  It’s really something to behold.  Walking Dead fans are truly seasoned by the greatness of the series writing room and in some cases capable of putting forth some very worthy story turns of their own.

That said,most of the rumble and expectation concerning “Welcome to the Tombs” turned out to be dead wrong.  If you were expecting a drawn out gun battle where major characters were falling left and right, you were probably caught off guard by what turned out to be a plot driven by emotional extremes.

The clash did in fact happen.  Rick and a select few of his group withdrew into “The Tombs” and waited for The Woodbury army to venture into the prison.  Once there, they used the element of surprise to take down a good portion of the Woodbury ‘soldiers’, sending the rest scrambling for their lives.  This was fairly foreshadowed already, when The Governor began enlisting asthmatic teens and senior citizens into his ‘army’ his chances for victory when downhill rapidly.   To be clear, though, it really wasn’t so much about the substance of the ‘war’ as much as its effect on The Governor, who pulled the remains of his Army over on a back-road and proceeded to execute them for failing him.  Yes, The Governor, along with Martinez and one other, survive the finale, but most would say not intact.  The Governor is clearly now more dangerous than ever.

Andrea and Milton had conspired towards the end of the season and ultimately paid the price in a tension and suspense cocktail of a scene in which The Governor had fatally wounded Milton and left him in the room with Andrea handcuffed to The Dentist’s chair.  The Gov’s plan was for Milton to ultimately die and munch on Andrea in the chair.  Milton had managed to slip Andrea a pair of pliers and the segment became a test of whether she would free herself from the chair before Milton turned.  She got free but was bitten, and the final scenes she killed herself using Rick’s Python.  The series simply will not be the same without Laurie Holden or Andrea.  She was an emphatic voice of reason and a part of the group’s super-conscience much in the way Dale was. 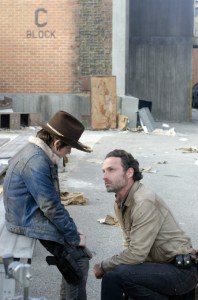 If there is an area of disappointment it is with the ending of the finale.  Rick goes to Woodbury and rescues Karen, one of The Governor’s people who managed to avoid his bullets, along the way.  She informs Tyreese and Sasha of what The Governor done.  Next thing we know a bus is pulling up to the prison and Woodbury’s children and old folks begin filing in.  This is the essential setup for season four, and as such it really doesn’t give us much to chew on.  Rick is now suddenly interested in community building?

Carl is show to have hardened considerably and developed his own logic of war.  It begins when one of the frightened Woodbury soldiers runs into him and Herschell outside of The Prison.  The kid gives up, but Carl shoots him anyways.  Herschell describes it as “in cold blood”, when Rick discusses it with Carl, Carl lays out a string of causal examples for why he did the right thing.  He hadn’t killed swamp zombie, swamp zombie killed Dale, Rick hadn’t killed Andrew, Andrew’s actions killed Lori, and so on.  Rick is a bit speechless because the logic is hard to argue with, and in a world completely drained of the myriad reasons why preemptive killing isn’t actually a good choice most of the time he has little to father up with.

Carl’s dark progression has certainly been alarming, and at times entertaining, but by the way they have left this with us it almost seems as though we should be concerned with what is fermenting in his little noggin.

I thought it was a fantastic episode.  Saving The Governor was an interesting choose, I can’t wait to see him again.  The massive number of death involved did not seem to strike at the core group too much.  Andrea, a huge loss.  I’m guessing if we did a poll,  Andrea wouldn’t be near the ‘top’ of characters fans would want to survive.  The time spent aware from her kin in the prison softened the connection for the audience I feel.  Clearly her heart was always in two places, but she felt a duty to the people of Woodbury and often times felt like an outsider.