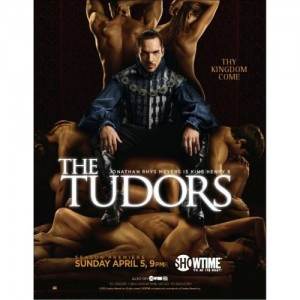 The Tudors is one of my favorite shows. I love the soapiness of it. I love the crazy antics of Henry XIII, the sex, the gorgeous costumes and even the occasional historical inaccuracy. Showtime will be releasing The Tudors Season 3 on DVD on December 15th.

I was distraught at the end of season 2 when Anne Boleyn was beheaded. I loved Natalie Dormer in the role so much that I prayed – somehow – history would change and she would be kept alive. Alas, since she was only wife #2, and we know that Henry got it on with four more wives, poor Anne was not long for this world.

Enter Jane Seymour, probably the most beloved of all of Henry’s wives. And not for nothing – she did bear him his only son (of course, Edward went on to rule for a very short period of time and was succeeded by both of his sisters, but that’s no nevermind).

Season 3 of The Tudors opens with the fallout from Anne’s death and the religious problems that Henry created in his attempt to break away from the Catholic Church in order to marry Anne in the first place. Enter Lord Cromwell, who attempts to quash the Catholic rebels and retain the supremacy of Protestantism in England. Played brilliantly by James Frain, Cromwell is a ruthless man who occasionally shows the merest traces of humanity. Fortunately for Cromwell, his king is just as ruthless, and Henry sends his army, along with his best friend and former brother-in-law, Charles Brandon, to teach those nasty rebels a lesson.

I will admit, there were moments of this season that seemed to drag. Those moments focused primarily on the rebels. The actors themselves were sublime and gave great performances, but my attention somewhat waned when this show – which I primarily consider a historical soap opera – focused more on serious political issues. I have no problems with politics, but the part of the show that most appealed to me happened within the royal court.

Here’s some trivia: if you’re a musical theater fan like me, you’ll recognize Colm Wilkinson as a rebel in several episodes. Colm has headlined many, many shows in Canada, the US and the UK, including Phantom of the Opera and Les Miserables. Listening to him perform The Music of the Night or Bring Him Home is heaven. And he has a very distinctive voice, which I recognized almost immediately. Every moment that he was on screen I was chanting “sing, sing!” in my head. See if you can spot him!

After Jane Seymour dies mid-season, Henry, of course, lapses into despair. Enter Anne of Cleves. Cromwell is determined to find Henry a Protestant bride, and the sister of a German prince fits the bill. Anne is played by Joss Stone. It’s rumored that she was quite unattractive and that Henry found her repulsive (as he does in the show), but I thought Stone did a rather admirable job and was pleasant – if rather plain – looking. Anne’s out the door faster than you can say “off with her head”, except Anne is one of the lucky few of Henry’s wives that actually gets to live. Seems she’s pretty enough to keep alive, along with an annual pension from the king.

Enter Katherine Howard, one of the youngest and silliest of all of Henry’s brides. In the show, Brandon and other Cromwell-haters conspire to catch Henry’s eye with young Katherine and rid themselves of Anne and Cromwell altogether. This seems to work and we are left at the end of the season with Cromwell’s fall from Henry’s favor and Katherine’s sweet laughter revitalizing the aging and sickly king (unfortunately, Henry’s got that ulcerated leg – and it’s gross).

While season 3 never manages to live up to the delight that was season 2 (or do I simply miss Natalie Dormer too much?), the show never really disappoints. There is only one more season left of this fantastic show – after all, he’s only got six wives and he’s already gaining on number five – so if you’re not already a fan, then you should definitely pick up seasons 1 – 3 on DVD and catch up. Season 4 is set to premiere on April 11, 2010.

Check out set photos from Season 4 of The Tudors (although some of the photos are behind the scenes from season 3).