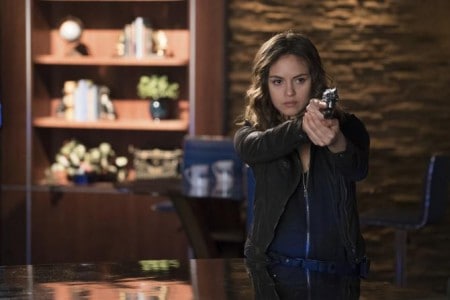 Trying to make sense of The Vampire Diaries just got a lot more complicated. As a whole, this season went from one of promising potential to one of utter disappointment with this episode serving as the turning point in my mind.

Let’s begin with the Salvatores. Damon was all on board to save his little brother by taking his hunter’s mark until Rayna made him change his mind. This is where I started making that little questionable emoji face because Damon’s a smart guy for the most part. Or he used to be. He used to be quick and thinking one step ahead of his enemies so how did he not put two and two together to realize he’d be giving up his future reunion with Elena if he transferred the scar from Stefan? Seriously, duh! It was established that Rayna has one life left and when she’s done, the rest of her marked targets die with her.

Damon does change his mind at the very last minute but naturally it’s too late. Valerie can’t complete the transfer spell because Stefan was already stabbed by the phoenix stone and for all accounts, he’s a goner. Or so I thought. It’s really so confusing to figure out what we were supposed to take away from Rayna’s obvious distress as the phoenix stone and sword went up in flames. What does this mean for her now that she’s rendered weaponless? What about Stefan? Where is he if he’s not exactly dead?

We do know Nora and Mary Louise are 100 percent dead though. Mary Lou was poisoned by the Armory with Rayna’s blood and Nora wasn’t going to live another day without her. All very tragic and romantic of the couple to go out on their own terms, together.

Death is all around as we see through the jumble of time jumps that Penny, Matt’s friend turned presumed girlfriend, died in the last 3 years. Stefan is to blame, which at least explains why Matt broke Rayna out of the Armory. I have some issues with his revenge plot here until more light is shed on the circumstances of her death. Was Stefan provoked or otherwise threatened by Penny? It doesn’t add up that he would betray Matt for no other reason. They were friends since high school and I know that doesn’t mean much to Stefan in the course of his longer life, but Matt’s just a good guy in general. I’m a little disappointed in Matt for not being the bigger person here too. If I knew these guys in real life, I’d want to sit Stefan and Matt down and make them talk to each other before releasing a crazy vampire hunter on your former friend.

Enzo unfortunately and inexplicably still plays a big role in all this. Something about the Armory is still fishy too. Alex wants Enzo back and alive yet Enzo was in Dallas “for work” he claimed. I thought he was working for the Armory. Now it appears he’s going to need to save Bonnie because of the poisonous tranquilizer pills he’s no doubt been slipping her. Although at this point Bonnie might be in the mental hospital from the earlier flash forwards we saw. Like I said, the time jumps are a mess. “Today” technically means 3 years from now since we were all caught up to speed in the last episode. In between the future current timeline, we’re also getting brief glimpses at what’s happened 2 and 3 years ago, also known as the real time and 1 year from whatever calendar year the show is actually using.

Shipping wise, Steroline fans were in for a surprise when Valerie and Stefan kissed. Any Valfans reading this? They do make a sweet couple, and Val made a good point to Damon that she was all Stefan had for those 3 years. It makes sense they’d recapture the spark from their relationship when they were younger. Caroline ditched Stefan for her new mommy life and Damon selfishly daggered himself, leaving his brother alone once again.

All my gripes about the direction of the season are purely out of a love and longing for what the show used to be. Ian Somerhalder did a fantastic job directing again with what he was given. What did you think of the episode?

The Vampire Diaries Season 7 Episode 16 Review: “Days of Future Past”

Stefan and Damon do their best to deal with Rayna in this ultimately disappointing episode.