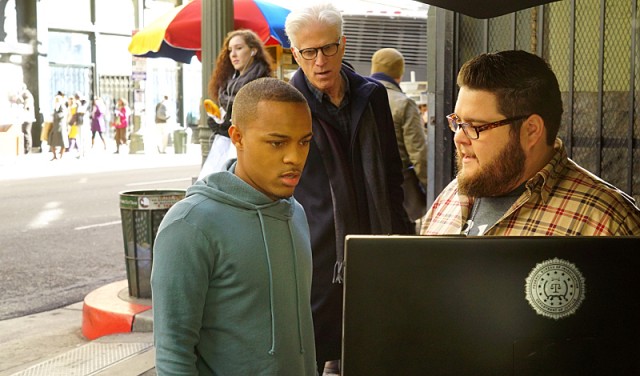 We use cell phones every single day. Checking and writing emails, listening to music, texting our friends and post things on social media. Yet what would happen if we tried to call for help and not get it in time? That’s what Team Cyber is undertaking in this week’s episode of CSI: Cyber.

The hour began with various people in the city of New York calling 911 in order to get help, whether it’s to report a crime, an accident or someone being injured. They would dial the infamous three digit number, thinking that they would get the help that they need, but instead of hearing that help is on the way, their phones would freeze in call mode.

After sweeping the 911 call center’s system and devices, no malware could be found, which baffles the team. All seemed lost until D.B figured out that the problem might be with the cell phones themselves. Turns out he was right as the officer in charge of the call center, Clayton Carver, came in with an incident report at a construction site where the foreman tried to call 911 but the call was dropped.

Agent Mundo then retrieved the device and Nelson and Agent Krumitz were able to figure out the source of the malware, it came from a router on a New York City bus. Okay, why don’t we have free wi-fi on the buses here in Canada? I mean, we have the technology don’t we?

I enjoyed the light banter between Nelson and Agent Krumitz when the former said that the latter should speak more like an FBI agent. Agent Krumitz then tried out a deeper register of speaking as he and Nelson were heading to locate the router and it just made me smile from ear to ear. The chemistry between these two is just perfect. A suggestion for you, Krummy, maybe you can take a page out of Agent Cabe Gallo’s book or perhaps Agent Mundo can give you some pointers.

I also agree with Agent Krumitz’s comment about using landline phones. It’s becoming less and less of a norm to use these types of phone given that, as mentioned in the opening paragraph, that cell phones are what people use these days to communicate on the go or at home. I have a landline phone at home but I rarely use it unless it’s to call my grandmother who lives in Taiwan.

The scene where D.B was asking Raven if he should text the mystery person back to say that she got the wrong person, I was hoping that it would be his ex-wife trying to make amends for what happened to their marriage when I read the text messages on the screen. Granted, I had to pause to read the whole thing, but I had a feeling that it might be the ex-wife. I was mistaken and a bit disappointed when I found out that the person who mis-texted D.B wasn’t his ex-wife but someone else towards the end of the episode. Guess my predicting powers need a little work.

Back to the case, the team was able to track down the culprit responsible for dropping the 911 calls: a former employee named Leo Finch. Yet another case of the disgruntled employee looking for revenge after being relieved of his duties. Turns out, Leo is addicted to listening to these emergency calls as it gives him the thrill of being in control of a person’s life and even carried out two of his favourite calls in the real world to further satisfy his horrifying needs.

I liked the idea of using AMBER alerts to get people to help find Leo so that he can be brought to justice. Shame it backfired when the alert was sent to everyone in New York including the criminal himself. The team was able to find a solution to locating Leo by using the third 911 call on the deviant audiophile’s laptop and found the exact location in time before anyone got hurt.

This was a good episode despite the three-week hiatus. Certainly makes me more aware when it comes to using free wi-fi either at a restaurant or coffee shop. I applaud Deputy Director Ryan for sticking up for Nelson to Mayor Cavanaugh and telling the former Black Hat that though he can’t rewrite history, he can certainly make history. I hope that Nelson can track down the real person who took the eight million dollars from the Stock Exchange and put him behind bars once and for all.

911 calls get dropped when people are desperately calling for help as the team tracks down the responsible party in this week’s great episode.