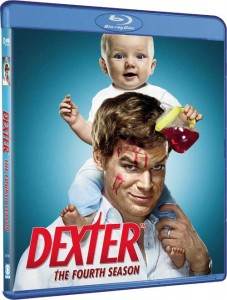 August 17 meant that fans got a new dose of Dexter with the release of the critically acclaimed fourth season. How did the home version stack up to the amazing year of the show? Look no further to find out.

I’m sure if you’re at all familiar with Dexter, you’ve heard all the hype about this season, and it’s all true. This is probably the best season of the series yet, and it leads into what’s already shaping up to be a great season five. Michael C. Hall was robbed of an Emmy for a lead performance that gets more complex and more compelling every year. This year, Dexter’s problem was trying to have an idyllic home life while balancing it with his killer urges. He thought he’d found someone who proved it was possible when he met Arthur Mitchell (the very deserving Emmy Award winner John Lithgow, who will ruin Third Rock from the Sun for you with his disturbing performance), but of course Mitchell isn’t what he seems either. He’s the Trinity Killer, and he and Dexter are on a collision course that ends shockingly.

Those two could make a series on their own, but Dexter doesn’t stop there. We see Debra (Jennifer Carpenter, who is continually robbed of even being nominated for any major awards) dealt a major personal loss of her own. The vastly underrated Desmond Harrington, in his first season as an official regular (despite being in every episode of season three), gets his own subplot when Quinn winds up in bed with a reporter who isn’t what she looks like either. Harrington is finally starting to get his due with Dexter, where he’s proving he might be able to carry a show of his own someday. However, he’s paired with Courtney Ford, who is more annoying than anything else and whom I would call the one weak link of the season. There’s also a romance going between Lt. LaGuerta (Lauren Velez) and Sgt. Batista (David Zayas). Love appears to be in the air in Miami, but of course, this is Dexter and by the end of the season, love hurts a whole lot of people.

Taken as a whole, this may be one of the most involving full seasons of a show I’ve ever seen. I don’t remember being this on the edge of my seat since the debut season of 24 almost a decade ago.

Wow. Compared to the DVD version, the Blu-Ray edition of Dexter is worth the upgrade. I had both the DVD and Blu-Ray in hand at the time of this review, and I definitely prefer the Blu-Ray. On any other show, I wouldn’t be so gung-ho about the upgrade – after all, we’ve been watching TV on DVD just fine for years before Blu-Ray came along – but Dexter is a show that really benefits from the conversion. Specifically, the enhanced audio makes the show seem even scarier than it actually is. The score and sound effects are creepy and/or thrilling enough already, but in Blu-Ray they can get downright startling. There were a couple of times I flinched a little. The video’s improved as well (all those great Miami colors really pop), but it’s the audio that enhances the Dexter experience.

This is because the show sports a Dolby TrueHD 5.1 audio track (there’s also a Spanish 2.0 stereo track), and is presented in 1080p high-definition widescreen, with optional English subtitles. These discs are really enhanced to make Dexter compelling in the visual and auditory realms, which when teamed together with such a great season, does make for one heck of a viewing experience.

There aren’t any packaging issues to discuss as this is a Blu-Ray release. However, I’m waiting for someone to complain about the package art. In this age where someone gets offended at just about everything, I’m surprised no one has complained about little Harrison on his father’s shoulders while the juice-as-blood imagery is plain as day. After all, they complained about the monkey in Michael C. Hall’s Dodge commercials.

One of my gripes with each edition of Dexter is that the special features just aren’t there. At least in the first two seasons we had a commentary track or two, but more or less, extras have been limited to episodes of other Showtime properties and then maybe something else. It’s beyond frustrating, because there’s so much good material that could be put on these discs. There’s nothing worse than a great show that doesn’t get its due in bonus features.

This time around, you get two episodes of Californication (Season 3, Episodes 1 and 2), two of The Tudors (Season 4, Episodes 1 and 2) and the first episode of the Matt LeBlanc show Episodes. I understand the goal is to market other Showtime series to loyal Dexter fans, but I was saying to myself, “If I wanted to watch those shows, I’d go out and get the DVDs of those shows.” You’re not far off from them, as The Tudors comes out in October, and Californication in November. Ostensibly, Showtime wants you to buy those DVDs as well, but how many people would buy an entire DVD set after viewing only two episodes of a show? I’m not sure.

The one Dexter-related extra here is a series of interviews with Michael C. Hall, Jennifer Carpenter, Julie Benz, Lauren Velez, David Zayas, James Remar, John Lithgow, C.S. Lee and producer Clyde Phillips. Suspiciouly missing from this group is Desmond Harrington (Quinn), an absence made more noticeable by the fact that everyone else is here. These are good interviews, but it just makes me wish there were more to them.

To add insult to injury, all the special features are once again only available through BD-Live, meaning you have to access them via your computer. It’s tedious and one wonders if these will still be available a year or two or three down the line, or if eventually you’ll be deprived of those as well.

Target offers an exclusive copy of this year’s PaleyFest Dexter panel if you purchase this season through them, but then you’re paying a good $10 more at least over the price of online retailers, so essentially you end up being charged for the bonus disc. Having attended that panel myself, I can’t say that I think it’s worth the extra money, as it’s worth probably one watch and that’s it.

If you’re a Dexter fan, a fan of good TV, or even a casual watcher of the show, you need to own this season. The disappointing lack of special features continues to sting but the overwhelming quality of the episodes still makes this a must-own. If you have the option, the Blu-Ray version is worth the extra cost for how much it further enhances the viewing experience. Go out, get this season, enjoy the ride, and get ready for what looks to be a great fifth season. Yet it would have to work pretty hard to top this one.