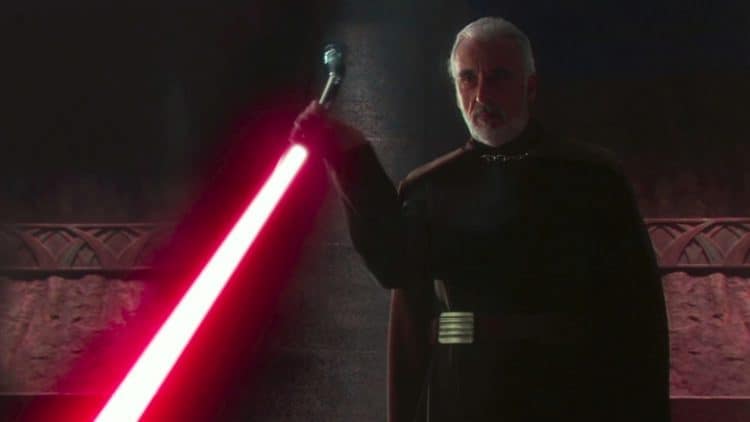 The colors of a lightsaber never used to be much of a hangup when people first started watching Star Wars, but as the films progressed so to did the ideas surrounding the vaunted weapons of the Jedi and the Sith. In many ways a Force-users weapon came to identify them as evil, good, or something in-between. But a red lightsaber used always mean that the user was going to be evil and in many ways a despicable villain that was firmly set against the Jedi while still using some of their ways in a very dark form. The Sith have always been the opposite of the Jedi, or have for as long as the canon tells us, and their doctrine has always been one of aggression that is built upon passion and all the negative connotations that can come from it. Thus, the red lightsaber has always had a rather negative meaning, but in truth it’s not always the lightsaber that carries the real danger.

Here are a few things you might not know about red lightsabers.

10. Red lightsabers are favored by the Sith.

Okay this one seems like a gimme even if you’re not a hardcore fan of Star Wars. Almost every Sith you’ve ever seen in the movies, the comics, and the cartoons has had a red lightsaber and been absolutely bent on the destruction of the Jedi or those that they’ve chosen to target. The Sith are notoriously brutal and have never been shy about the implements they use.

9. Throughout Star Wars history there have been Jedi that have used red lightsabers.

This seems like it might be more rumor than truth but the honest to goodness truth is that Adi Gallia, a Jedi Master, used a red lightsaber at one point, as did Quinlan Vos while he was undercover during the Clone Wars and supposedly working for Count Dooku. Vos seems to have crossed over for a bit, but he was in deep cover and had to keep up the ruse, meaning he had to almost become a full Sith.

8. All lightsabers were made illegal by Palpatine following the Jedi Purge.

Darth Vader got to keep his obviously but this was more because he was the Emperor’s enforcer than anything. Plus, if it had come down to a fight between Vader and anyone attempting to take his lightsaber from him the fallout would have been tremendous.

7. The crystals emit a red light because they are ‘bleeding’.

The crystals that are gathered for the use powering lightsabers are said to be Force-sensitive, meaning that they are as near to sentient as can be without actually crossing that threshold. But as the Sith simply take what they want and do as they please, the nature of the crystal is changed by force and this corrupts its natural purpose, which causes it to ‘bleed’ and act as a power source, but one that is negatively charged rather than kept in tune with the Force.

6. Many red lightsabers are made with synthetic crystals.

This is one of the most popular aspects of the red lightsaber since while there are red crystals that grow naturally they are still attuned to the Force like everything else. Synthetic crystals can be tuned to the dark side much easier since it doesn’t involve the corruption of the crystal.

5. Kylo Ren’s red lightsaber has added modifications due to the crystal it uses.

His lightsaber featured a cross guard which is not standard on many lightsabers. This was due to the fact that his crystal, supposedly a red synthetic, was cracked and therefore its power was unstable and needed extra venting. The saber was still very functional but it was less stable than many others.

4. The color represents passion and aggression.

This is a real-world thing as much as it a Star Wars thing as red is the color of danger, aggression, and even passion. Red is a color that many people associate with power and a very negative image that can come when that power is used in a harmful manner.

3. Eventually it became a very uniform color of lightsaber for the Sith.

If you watch the cinematics for the Old Republic video games every Sith has a red lightsaber. In fact in one video when you see a ship unloading a small army of Sith it’s like watching a small forest of red, glowing lines being born as they ignite their sabers.

2. Red lightsabers are commonly used to tell a Sith from a Jedi.

The propensity of a Jedi to use a red saber and a Sith to use anything but a red saber makes it easy to tell which is which since they tend to stick to the colors that represent their order. In the case of the Jedi there are many colors, while the Sith tend to stick to red.

1. The ‘bleeding’ explanation is new canon.

This was explained in the book “Ahsoka” which is a standalone story by Ahsoka Tano, Anakin’s former apprentice. Originally George Lucas just thought the lightsaber idea was a cool thing to do, he didn’t put a lot of thought into it until later.

Usually when you see a red lightsaber it indicates that trouble is about to kick off.