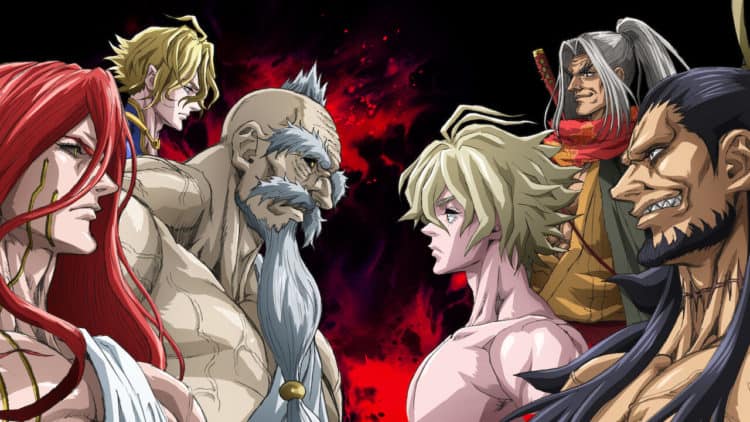 If you’re a fan of the craziest anime, then check out Record of Ragnarok on Netflix. The magna, which I haven’t read yet, isn’t done, but if you have Netflix, check out the show. It’s still rather new, and the first season left off on a very epic and mind-blowing cliffhanger. I won’t say how and why just yet, but I do want to recommend this anime. Now I’ll confess, I’m not the biggest anime fan in town. I’ve actually just recently started binging some anime shows on Netflix and I’ve been bouncing around shows for weeks. I came across Record of Ragnarok not too long ago and decided to give it a shot. To sum up what the anime show is about, it’s basically Mortal Kombat meets God of War. It’s big, it’s bloody, and it messes a lot with history, mythology, and religion.

Now if there’s one thing that annoys me about the whole mythology story in movies, it’s really the fact that it’s all the same. Watch Clash of the Titans and its sequel and that’s a fine example. Sure, you can probably count the Marvel movies with Thor, but that really breaks the system, much like Record of Ragnarok. The point is, movies and shows that typically involve the gods from all kinds of mythology have the same premise. Some of the gods are being bad and the ones who aren’t find a mortal champion to help them fight. The gods aren’t nearly as awesome as they should be in most of those movies, and that really annoys me.

When I watched Record of Ragnarok, I feared the same thing. However, the anime kicked things off to a big start. So the entire first season takes place in a coliseum floating in the sky with a large audience divided into two types of crowds. On one side, there are humans from literally every century in history sitting together, while the other side is filled with all kinds of creatures from mythology. Both sides watch as an epic Mortal Kombat-style tournament takes place.

What does the tournament entail? In the opening minutes of the first episode, the gods of several religions take a unanimous vote and decide that humanity is no longer worth keeping alive. Before they can decide to exterminate them, however, the eldest of the valkyrie warriors speaks. The valkyrie, known as Brunnhilde, convinces the gods to give the humans a chance to defend themselves. The gods then decide to hold a tournament between themselves and a selected few warriors of history to represent humanity. To give the humans a fighting chance, Brunnhilde allows each warrior the assistance of a valkyrie. Each valkyrie grants a warrior an enchanted item that gives them a fighting edge. The only catch is that if the warrior dies, the valkyrie dies with them.

So if the humans win, they save themselves from extinction. If the gods win, they destroy humanity. The stakes are astronomically high and we see a lot from the first three fights. With just one season of Record of Ragnarok, we got to see three matches between god and man. It was some seriously epic stuff, but the tournament itself is, well, called Ragnarok, hence the title.

And when I say it seriously messes with history and mythology, I really do mean it. For instance, the first match is between the mighty Thor and legendary Chinese military general and warlord Lu Bu who lived during the Eastern Han dynasty of Imperial China. Whenever I hear Thor, I just think of Chris Hemsworth at this point. I mean, it’s pretty hard not to, right? Well, the Thor of Record of Ragnarok is the exact opposite of Chris Hemsworth. He’s a tall guy with long, red hair and a hammer that’s fifty times bigger than his body. He’s the farthest thing from the heroic Thor we all know and love from the Marvel Cinematic Universe, but he’s at least a more accurate Thor from a mythological standpoint.

Not crazy enough for you? Well, the second match in Record of Ragnarok pits the one and only Zeus against the very first man who ever lived. Remember the story of Adam and Eve from the bible? Well, Adam jumps into the coliseum, almost completely naked and chewing on an apple, fully prepared to duke it out with Zeus. And by the way, this is the most unusual and facetious fictional version of Zeus I have ever seen in any movie or show. When they fight, they don’t pull their punches and it’s some seriously epic stuff.

That’s just a taste of what Record of Ragnarok dishes out. What’s really cool about it is that it doesn’t leave out other major players from mythology. Along with Thor and Zeus, the roster of gods include Hermes, Aphrodite, Shiva, Loki, Odin, and his two ravens, Huginn and Muninn. The ravens talk and they’re actually funny. Loki looks like he shops at Hot Topic everyday and acts a lot like the MCU version, and Aphrodite is always seen with two statues that carry her large breasts around. As I said, Record of Ragnarok is filled with all kinds of crazy stuff that messes with history and mythology.

And what of future seasons? Well, the magna is still being written, so there’s still a story to tell. There aren’t any details on when season 2 will be coming to Netflix, but chances are, we won’t see it until next year. I seriously hope we do, because the first season ended on a crazy cliffhanger. The combatants are none other than Hercules, the champion demigod, and history’s most notorious and elusive killers ever, Jack the Ripper. Seriously, if that doesn’t get your attention, then I don’t know what will. All I know is that the magna includes other figures from history and mythology, including Leonidas of Sparta, Simo Hayha, Buddha, Susanno from Japanese mythology, and many more. This roster is insane.

If you haven’t watched Record of Ragnorak yet on Netflix, check it out.