Home
Movies
Did We Ever Really Get a Reason For Han and Leia Breaking Up?

As it happens the Legends canon of Star Wars kind of gave a lot better reason for Han to part ways with Leia for a while, but then he didn’t exactly break up with her during that time. In the current canon it’s implied that they actually parted ways for a while, taking some time away from each other due to, it would seem, the descent of their son to the dark side of the Force. That seemed to be what it was, but throughout the story, both Legends and the current canon, it’s been seen that Han has a seriously love for the open road, so to speak. He’s been a drifter and a smuggler for so long that being confined to a life on the ground and not among the stars is just not in his DNA. But the fact remains that he has loved Leia since the original trilogy and can’t be without her. No matter how far apart they are he still professes to missing her when they reunite. But many people are still wondering whether or not there was a concrete reason for the two to part in The Force Awakens, or if it was presented so quickly that we all missed it.

It’s possible to tell you why he seemed to part from her in the Legends canon at least.

After Chewbacca died in the Vong War, Han wasn’t the same man. 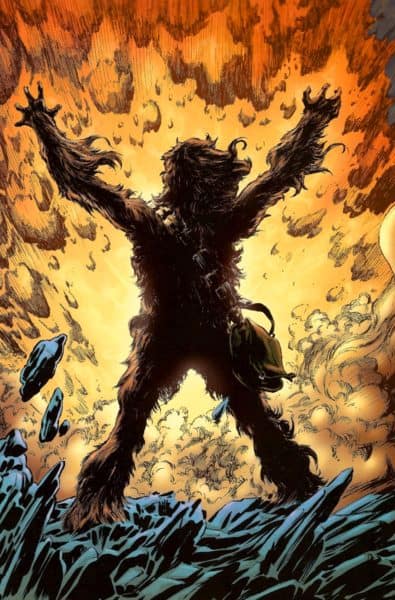 Chewbacca went out in the only way that he could, in defiance of fate. After saving Han’s son Anakin by tossing him onto the Millennium Falcon, Chewie stood roaring in utter defiance as the Vong, an invading alien force that even the Jedi couldn’t stop initially, destroyed the planet he was on by dropping a moon onto it. The death of Chewbacca shook a lot of Star Wars fans at that point as it was believed that Chewie was simply invincible and couldn’t be killed, or wouldn’t be at least. But when the big Wookie died Han just wasn’t the same. He went back to his smuggler ways and became a very dangerous individual. It took a monumental effort for him to come back, much as it did in the current canon, and even then he was a very changed man.

Leia seemed to bring back the pain of the loss they’d suffered.

Losing a child in any way has to hollow a person out, even those fictional characters that we happen to love so much. Han left largely because it seemed as though they’d failed, that they had lost their son because of something that been their fault. In truth, we now know that Snoke was seducing Ben the whole time, but he also seemed to have a darkness in him that Luke sensed and was about to eradicate before his conscience stepped in. Unfortunately none of that mattered since Ben was almost lost to the dark side already. But the wedge this put between Han and Leia was easy to see since Han couldn’t accept that his son had simply turned. He had to believe that it was something that he did, a flaw that had occurred that had driven his son into the service of someone like Snoke. Han Solo might be a smuggler and something of a thief, but he’s always had a conscience that doesn’t let him just walk away. Unfortunately his love of the stars and his unease with anything that doesn’t move fast enough has always left him a bit torn between two worlds, and when tragedy hits the world he knew as a younger man seems very tempting. If you couldn’t tell by now, Han is not the kind of guy that does well with family issues.

Han is also a bit of a wild spirit.

He can’t be tamed, he can’t always be controlled, even by those forces that should by all rights be able to command his utmost loyalty and devotion. Han Solo has always been the guy in the Star Wars franchise that never wanted anything to do with anything that didn’t fit in with what he wanted from life. Yet when he met Luke and Leia that complication started to grow and he started to lose a bit of his old self as he realized that there was something else worth fighting for. But the conflict still existed no matter how much he became a family man. Even in the Legends canon he could never go too far from his kids and wife, at least not until Chewie was gone. His spirit has always been something that was never meant to be stilled, and this is one reason why no matter how much he and Leia loved other, and did until the end, that Han Solo was the kind of guy that would never fully settle down until death came to claim him.